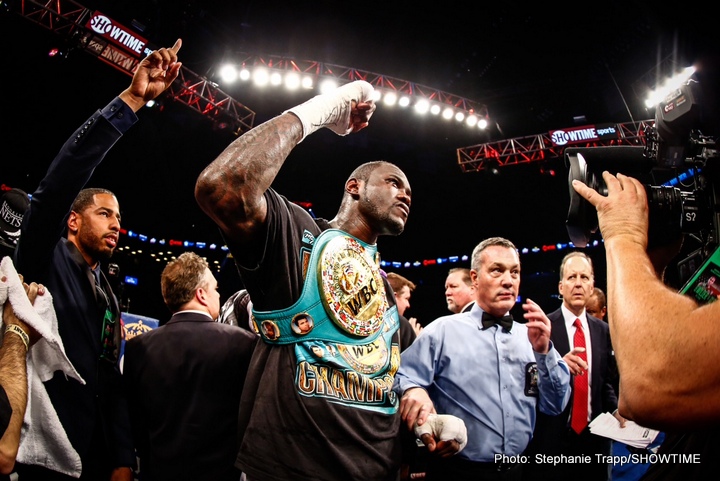 A Russian promotional company World of Boxing had recently won the bidding war for the Alexander Povetkin (30-1-0) vs. Deontay Wilder (36-0-0) bout, which will now be taking place somewhere in Russia, with the Moscow Olympic Stadium probably being the likely venue.

Wilder will be guaranteed $4.5 million, and Povetkin a much slimmer number of $1.9 million.

After winning the rights to the fight, Andrey Ryabinsky had stated that on March 8, he would announce which country would host the heavyweight championship bout. When the time arrived, he confirmed that the bout would indeed take place in Russia, to make his fighter Alexander Povetkin more comfortable:

“I had a few options: to make a ton of money, or to create a comfortable environment for Alexander. The choice was easy, I picked the second option. The fight will be in Russia. We will be very happy to extend a warm welcome to Deontay Wilder and his team. I don’t know who will come out victorious, Alex or Deontay Wilder, but I want to be sure, that I did everything that I could. Everything else depends on Alex,” said Ryabinsky.

According to many boxing fans and pugilists, this may very well be Wilder’s first real challenge. Wilder has had a very impressive career thus far, with an explosive personality and an astounding 97% KO rate. His competition though, lacked A-class challengers. This time around, he will have an entirely different opponent in front of him in Alexander Povetkin.

While Povetkin is six years older than Wilder, his performances have showed that he is in good shape, can take a punch, and give one back for an entirety of the bout. This might turn out to be one of the more exciting heavyweight fights we have seen in a while.

There is no date set yet, but many are assuming thatit will happen sometime towards the end of this Summer.