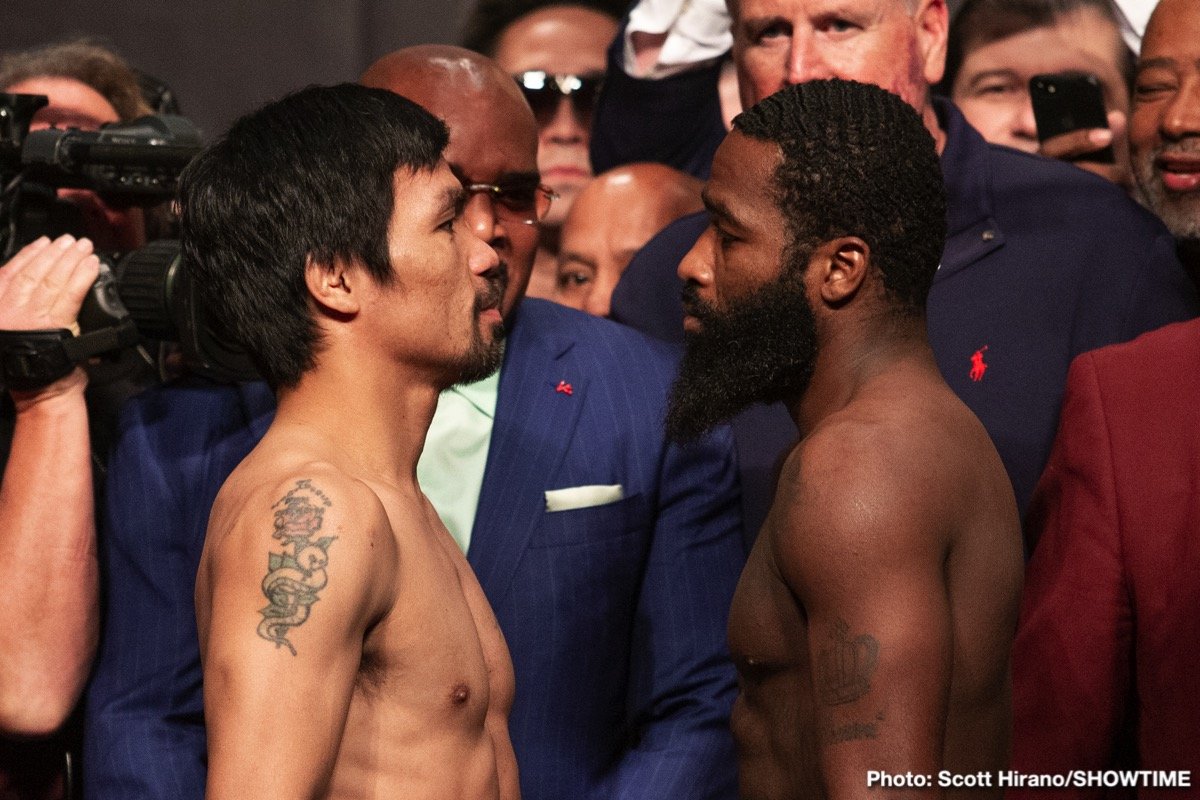 Adrien Broner is not done yet. “The Problem” returns to action on Saturday night, against the unbeaten little-known Jovanie Santiago, and he is talking plenty. Broner, though, is not talking so much about his upcoming fight – although he does say the Santiago fight is his “biggest worry right now.” No, 31-year-old Broner is more interested in talking about his January 2019 fight with Manny Pacquiao. You know, the fight that Broner lost via wide and comprehensive unanimous decision. Broner was out-punched and outworked over the course of the 12 rounds, right? Broner says no.

When speaking with boxing writer Mike Coppinger, Broner claimed Pacquiao’s punches were in fact missing him, or a good deal of them were missing the target. “Shit, I was serious [when I said I felt I won the fight]. I didn’t give a f***. I really felt like he wasn’t hitting me,” Broner said.

If you recall, Pac-Man won by commanding scores of 117-111, 116-112, 116-112, and there really was zero debate or controversy attached to the fight or its scoring. This was no robberly, far from it. This was not even a close fight. But Broner disagrees and he urges fight fans to hear him out, sort of. In fact, Broner wants fans to go back and watch the tape of the fight but without the sound on. Mute the fight, Broner says, and you will see a totally different fight.

If you recall, a similar suggestion to Broner’s was made about that hugely controversial 12 round split decision win Tim Bradley scored over Pacquiao way back in June of 2012. The decision was almost universally condemned, with almost everyone saying Pac-Man out-landed Bradley by a massive margin and fully deserved the decision. But according to a video that was uploaded on YouTube, if you watched the fight without the sound on, and without listening to the “biased” commentary provided by HBO (most notably by Jim Lampley), the fight appears far closer than on initial viewing. Some fans agreed with the video and its arguments (and still do), some did not (and still do not).

Maybe we should take the time to take another look at Pac-Man’s win over Broner, just out of curiosity. Or maybe you, like myself, have already done so. It’s a definite win for Manny, sound or no sound. But Broner wasn’t hit with quite as many clean punches as it might have appeared on the night. But facts are facts, and Broner, as he said himself, was outworked by the busier fighter. Ain’t nobody calling for a Pacquiao-Broner II.

Broner, his career on the line, had better be fully focused on Puerto Rico’s Santiago, 14-0-1(10). Lose on Saturday and Broner will not be able to talk about much of anything any longer.