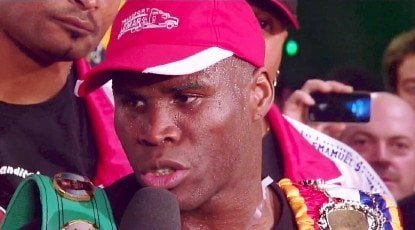 While Sergey Kovalev and Jean Pascal are on crash course for a fight on March 14th, WBC light heavyweight champion Adonis Stevenson (25-1, 21 KOs) could be facing a retread opponent in Andrzej Fonfara (26-3, 15 KOs) on April 4th. This is a fight that Stevenson’s promoter Yvon Michel is thinking of putting together for April.

Stevenson already beat Fonfara last May by a 12 round unanimous decision, so the fight doesn’t really make a heck of a lot of sense. Showtime would be the one that would make the ultimate decision, because the fight will be televised on their network.

If they feel it’s going to be a competitive fight then they’ll probably go ahead and air the match. However, the previous Stevenson-Fonfara fight really was only competitive for a couple of rounds at best. Fonfara knocked Stevenson down in the 9th round. Stevenson dominated Fonara from the 10th round on, and was as one-sided as the earlier rounds of the fight.

“Fonfara is a very tough fighter. He would be a very good opponent,” Michel said to ESPN.com.

I’m not sure that the Stevenson-Fonfara fight was a close enough contest to warrant a rematch. It was one good round by Fonfara in the 9th with the rest of the rounds being dominated by Stevenson. If 11 rounds to 1 is enough for the fight to have a rematch then that’s a pretty sad statement. If this was basketball then there would be no reason for another game between them, because it was a clear win.

Stevenson would be better off fighting someone different like Artur Beterbiev instead of using a recycled opponent who won one round of a 12 round fight.

Fonfara really needs to prove himself by beating a top contender like Beterbiev instead of being given another world title shot after losing to Stevenson by the scores of 116-109, 115-110 and 115-110. It’s not fair to the other contenders who are getting past up for a world title shot just so that Stevenson can face a guy he already beat in order to try and beat him even worse. It doesn’t make sense.

There was no controversy resulting from the Stevenson-Fonfara fight last May so there shouldn’t be a rematch. Stevenson should defend his title against another top contender, preferably someone with a chance to beat him like Beterbiev instead of Fonfara. Boxing fans already saw what Fonfara could do, and it wasn’t nearly enough.

The World Boxing Council will have to sanction a second fight between Stevenson and Fonfara, and I just don’t see how they can do it because it wasn’t a close enough fight for a rematch.