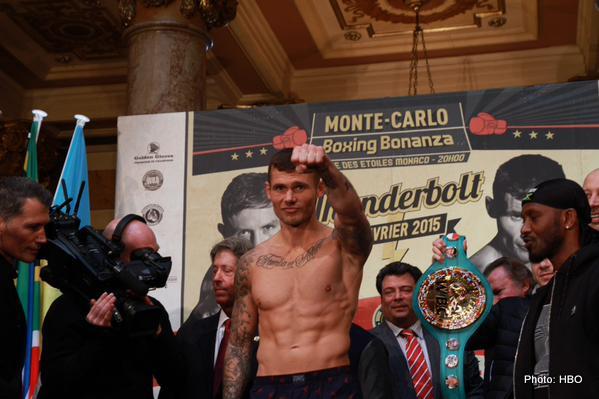 Should Martin Murray be successful in dethroning Arthur Abraham for the German’s WBO 168 lb title next Saturday, then Abraham’s Sauerland stablemates George Groves, or up and coming puncher Vincent Feigenbutz, could face off with the 3x world title challenger next in the unlikely event ‘King Arthur’ opts out of a rematch.

Murray will go into his 4th world title challenge in Hannover at his new weight of 168, after moving to super middleweight in the wake of February’s loss to Gennady Golovkin, and while he will rightly enter an underdog into the fight with the 35 year old champion, he feels this is his best chance at fulfilling his world title dreams.

Asked if he was keeping one eye on big domestic fights with the likes of new British champion, Callum Smith or IBF super-middleweight champion, James DeGale, Murray was clear – his only focus is Abraham.

“Callum’s a great fighter with a lot of hype around him at the minute,” he told Sky Sports. “I’ve always wanted a big domestic fight. I’ve always said that. If that’s a fight for further down the line then obviously it’s one I’d take.

“I’ve got obligations with rematches. It’s common sense. There’s a rematch clause in there but along with Abraham, it’s with another three Sauerland fighters, including George Groves and Vincent Feigenbutz. I’m not sure of the other.

“The priority is getting the win here, I’m not fussed. Then I’ll fight whoever.”