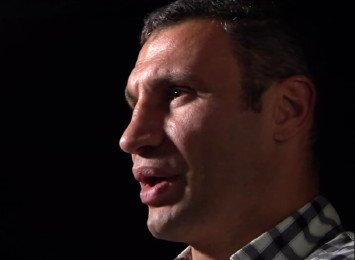 When they were fighting, the Klitschko brothers always had each other’s back. If one brother lost a fight, rest assured his sibling would do all he could to avenge the defeat so as to “restore the Klitschko family name.”

Wladimir lost to Corrie Sanders, and Vitali avenged the KO loss with a KO win of his own; while Vitali lost to Chris Byrd, only for Wladimir to punish Byrd on his way to family revenge. And now, in what would be a sensation if it actually happened, Vitali is talking (with a smile) about the possibility of coming back to the ring to avenge his brother’s April KO loss to Anthony Joshua.

Speaking with FightHub, the 46 year old former champ said he feels “guilty” over the loss his brother suffered this year, as he had given corner instructions to Wladimir to pace things in the sixth-round instead of going for the big KO.

“I feel a bit guilty because I told Wladimir in the corner please don’t be so active in round number six when Wladimir sent Joshua to the floor,” Vitali said. “I expect a big-muscled athlete to not recover, I was surprised, Joshua recovered so fast and stopped Wladimir. If I didn’t tell him to stop, then Wladimir might have knocked him out, six or maybe round number seven. A fight against Joshua is my best wish. I have a feeling I will return to the ring – I have to fight Joshua to bring back the belt to the family. I would knock him out.”

Again, Vitali, a smart man, was smiling broadly as he spoke of returning to the ring, and he may not be at all serious about coming back. Still, it would not be an unprecedented ring return if it did happen. “They all come back,” is the old adage, and even if Vitali has already enjoyed a successful ring return – having returned in 2008 to stop Sam Peter after having had almost four years off – he may feel he can do it again.

A Vitali-Joshua fight would certainly sell, even if such a match-up would have more than its fair share of critics. Heavyweight legend George Foreman was still fighting at the highest level at age 48, so maybe it’s not totally, completely out of reason that Vitali will be able to launch a return to glory.