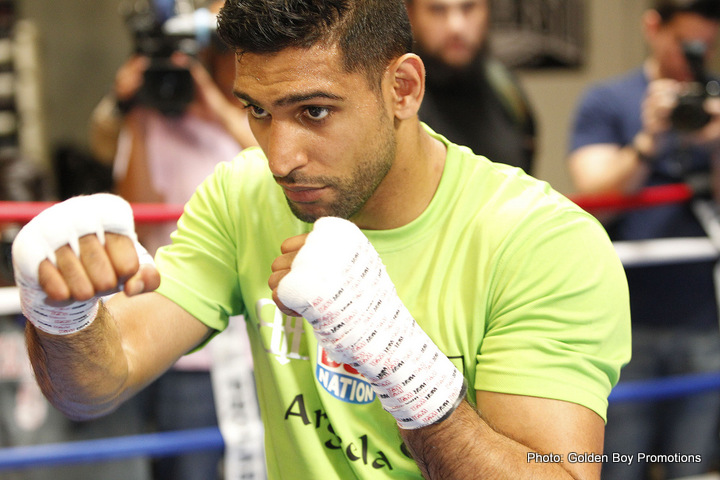 On the one hand it will be good to see Amir Khan back in the squared circle. He is a very exciting fighter. He is never in a boring fight. Gifted with some of the fastest hands I have ever seen. Khan attacks with blistering combinations while using his fast feet to move in and out. Also lending to his excitement he is not the most defensively sound fighter. He leaves himself open quite often. Many times to his detriment. However when watching Khan fight you know he could knock his opponent or be knocked himself. Sometimes his glass chin lets him down while other times it creates a back and forth classic like Khan’s 2010 war with Marcos Maidana. After having Maidana down in the 1st round Khan was forced to survive an onslaught from Maidana for the rest of the fight. Finding himself in trouble many times. The fight is a must watch. If we are getting that Amir Kham I’m all for a ring return.

On the other hand you have to be just a little concerned. Our last image of Khan was him on his back after that vicious Canelo right hand. Fans of Khan know sight a little too well. As Khan has also been knocked out by Danny Garcia and Breidis Prescott. These were not TKO’s either. Khan’s defensive shortcomings led him to leave Freddie Roach to train with Virgil Hunter. However despite his subpar chin and defense Khan is a warrior and is willing to go down swinging. No amount of training can change how you are hardwired. As a fan I do not want to see Khan knocked out again. It can become dangerous to his health. Not to mention his personal struggles. Can he block all that out and focus on boxing again?

Overall Khan knows himself and his body better than anyone else. It is his decision to box again. I along with many others will be watching intently hoping Khan can regain his former glory.