Pernell Whitaker, who just might deserve to be ranked in the Top-5 finest defensive fighters in the long history of a sport that is known as The Sweet Science, suffered due to three hugely controversial decisions that took place during his career. The “loss” Whitaker was forced to take home with him after his March, 1988 fight with Jose Luis Ramirez was simply awful; the decision in favour of Ramirez instantly recognised as shameful. The “draw” Whitaker had placed on his record in September of 1993, this at the conclusion of his fight with Julio Cesar Chavez, ranks as one of the worst decisions of all-time.

And then there was the fight an ageing yet still wizard-like “Sweet Pea” had in April of 1997. 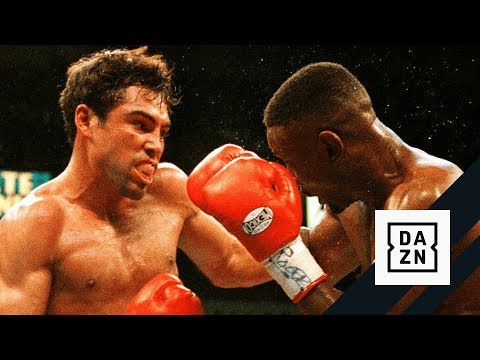 Oscar De La Hoya was bigger than ever at the time of the fight; the single biggest attraction barring, perhaps, the heavyweights. De La Hoya was every inch a superstar – a gifted boxer who was also blessed with movie star looks and a crossover appeal to kill for. “The Golden Boy” was also a babe magnet, with many of his millions of adoring fans being women. The thought of De La Hoya losing a fight was far from the minds of these fans, and it can certainly be argued, all these years after the fight, that the three judges who worked the welterweight title fight in Las Vegas were swayed by Oscar’s star power when putting pen to score-sheet.

In April of 1997, De La Hoya was in his prime, both from an athletic ability standpoint and from a Box Office-smashing moneymaking king of the cash register standpoint. At age 24, De La Hoya had a flawless pro ledger at 23-0(20) and he had already ruled the world at 130 and 140 pounds. Whitaker was 33 years of age and he was 40-1-1(17) – at least officially. Whitaker, who had ruled at 135, and had won a belt at 154, was defending his welterweight crown against Oscar.

Whitaker might have been the single best boxer on the planet at the time yet he was not for everyone’s taste. The boxing purists loved Whitaker, but his fleet-footed moves, his unconventional defensive moves, his love of showboating, turned off plenty of fans (and judges).

Whitaker gave De La Hoya fits – the younger, stronger, more powerful man being forced to bite down on his gum-shield in genuine rage as he was made to miss, and miss, and miss. Whitaker’s radar was fully functioning and he was as sharp as he had been years earlier. “Sweet Pea” even scored a flash knockdown over a by now seriously peeved De La Hoya, this with a left hand in round nine. But during his otherwise flawless and pure display of boxing brilliance, Whitaker played around; he took to adopting his own odd, disjointed version of the moonwalk as he escaped De La Hoya’s more and more ragged advances. In short, Whitaker should have/could have been punching more and playing less. Also hurting Whitaker was the point he had deducted, this due to the simply absurd WBC rule that demanded a point be taken off the uncut fighter if and when a head clash occurred; De La Hoya coming off worse from the accidental clash that happened in round three, suffering a cut under his eye. 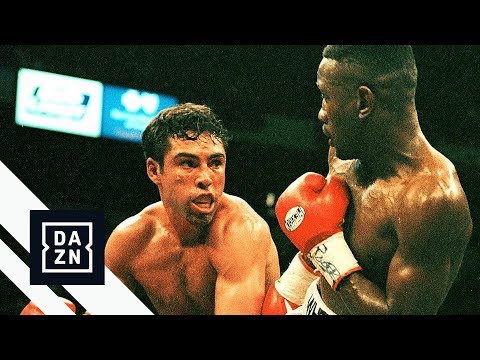 Still, despite the turn-off element to Whitaker’s game and despite the unfair point deduction, most observers (note I didn’t write most fans) felt Whitaker had won the fight (Larry Merchant for one). Instead, adding yet more garbage to a pro career that should have been littered with nothing but fair and honest decisions, Whitaker went down via astonishingly wide scores turned against him – 116-110, 116-110 and 115-111.

Whitaker, speaking post-fight, said he felt he had won by a “blowout.” Instead, the blowout went to Oscar.

Looking back at Whitaker’s career, it’s really quite unsettling how such a superb boxing master was so badly stung, three times, by the judges. Was Whitaker too good, too slick, for his own good, in that even experienced officials failed to either see or appreciate some of his silky moves? Maybe.

Whatever the case, Whitaker’s official record, which lists 4 losses and a draw, should not do so. In reality, Whitaker only ever lost two fights in legit fashion: his points loss to Felix Trinidad and his injury-enforced capitulation against Carlos Bojorquez, this in Pernell’s final fight.

As for the fight that took place a quarter of a century ago, Whitaker wanted a return go with De La Hoya. Oscar declined.