In a night of upsets, the heavy-handed Kiko Martinez 43-10-2, 30 KOs) dethroned IBF featherweight champion Kid Galahad (28-2, 17 KOs) by a sixth round knockout after dropping him twice on Saturday night at the Sheffield Arena in Sheffield, England.

The 35-year-old former IBF super bantamweight champion Martinez looked overmatched by the younger, bigger, and dare I say more talented Galahad through the first four rounds. Still, in the fifth, he shockingly dropped the champion with a monster of a right hand. 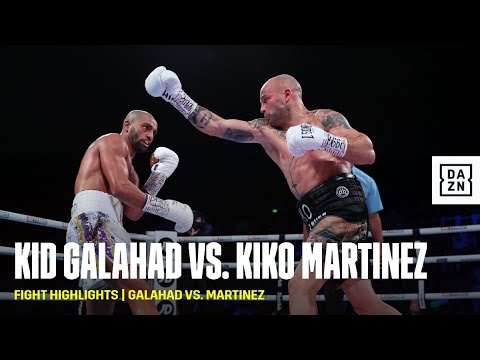 Galahad never knew what hit him

The punch bowled Galahad over, causing him to fall back first on the canvas without making any effort to brace his fall. It was like watching a tree fall in a forest after getting hit by lightning. Galahad was so severely hurt from that knockdown. To his credit, he got up from it and resumed fighting with six seconds left in the fifth round.

What was interesting about the punch that Kiko hit Galahad with was how he jumped forward to throw it. It was an odd way of throwing a punch.

Martinez leaped forward with his feet off the ground to land the right hand. It’s terrible form when throwing a punch, but he got everything on that shot and sent Galahad out into Outerspace.

Martinez wasn’t throwing punches like that in the first rounds, and he appeared to be saving that shot until the right moment. For him, the right moment was the fifth round, and man, he did a number on Galahad.

However, you could tell from looking at how hurt Galahad was that he had very little chance of recovering in between rounds. This wasn’t going to be a Tyson Fury type of situation where he’s flattened and comes back to get the win. Galahad was hurt in a way that made it clear that he wasn’t going to recover by the sixth.

At the start of the sixth, Martinez casually walked up to Galahad like he was about to greet an old friend and blasted him with a right hand that knocked him down. This time, you could tell that the fight wasn’t going to be allowed to continue. Galahad was staring at the lights on the ceiling, and there was no way that he was going to be able to get up from that knockdown to continue fighting.

Galahad’s promoter Eddie Hearn looked like he was in shock moments after the fight, jabbering, and you could tell that he wasn’t happy about what he’d just witnessed.

A rematch between Galahad and Martinez is almost a given at this point, but it might be a good idea for Kid. Martinez hits too hard, and if Galahad’s punch resistance diminishes after tonight, he’s not going to last long against the Spaniard.

Galahad doesn’t have much choice, though. If he moves up in weight to 130 or 135, he’ll have to tangle with Shakur Stevenson or Oscar Valdez. If he can’t beat the likes of Kiko Martinez, he sure as heck won’t be able to hang with Shakur or Valdez.

“In rounds one, two, three, four, I certainly didn’t see him winning the fight,” said promoter Eddie Hearn about Kiko Martinez. “That was what was so unbelievable about the knockout because there were no signs. It was a destruction.

“I still can’t believe it. I want to go watch it back again and again. I said to Kiko in the ring, ‘If anyone was going to beat Barry, I’m glad it was him because he’s a servant of the sport.’

“Yeah, Kiko Martinez is with Matchroom, and it would be good to give Barry [Kid Galahad] another chance. He was dominating the fight. We’ll speak to Kiko and speak to Kid Galahad.

“Those two fights, Terri Harper as well. Does Terri Harper come back and fight [Alycia] Baumgardner? It was a different type of fight. It was a close fight, but Baumgardner was winning the fight. She looked really dangerous in there. Kid Galahad’s one, it was just out of absolutely nowhere.

“We’ll see, but that’s why it’s the greatest sport in the world because it’s just thrilling, thrilling. Congratulations to Alycia Baumgardner. A star was born tonight. I can’t say a star was born with Kiko, but maybe a star rose again.

“Kid Galahad is always up against it. He doesn’t have a style that is going to thrill you every time, but he’s really, really good and he was really good tonight.

“The switch-hitting, the clever bits you’re not always going to see on TV. The standing on the foot, the holding on the inside, the shoving with the shoulder. He’s a brilliant fighter. I was thinking to myself before the knockout, ‘I don’t know who can beat him of the other champions.’ I’m absolutely shell-shocked.

“As I said this week, I thought it was a ballsy move by Steffi to accept that fight [with Baumgardner]. But if she’s going to be undisputed and all those things, then you’ve got to go through those types of challenges.

“It was a mixture of a year layoff [for Harper], and her confidence didn’t quite look there. She didn’t look sharp enough. Was the weight hard? She looked a little bit frail? These are things we’re picking at because of how good and dangerous Baumgarder was,” said Hearn.

Harper walked into a beautiful right hand from Baumgardner in the fourth round that caused her to lose her senses and stagger back.

The referee then jumped in quickly to prevent Baumgardner from nailing a defenseless Harper with a shot that would almost indeed have dropped her.

The crowd wasn’t happy for some reason, booing Baumgardner and perhaps the referee as well for the quick stoppage, but there was no way that the fight could have continued. Harper was literally out on her feet, and it would have been wrong for the referee to have allowed the contest to continue with her looking like that. 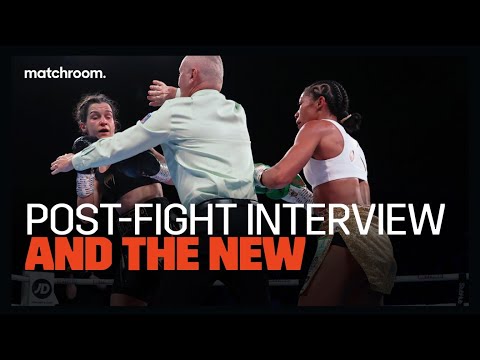