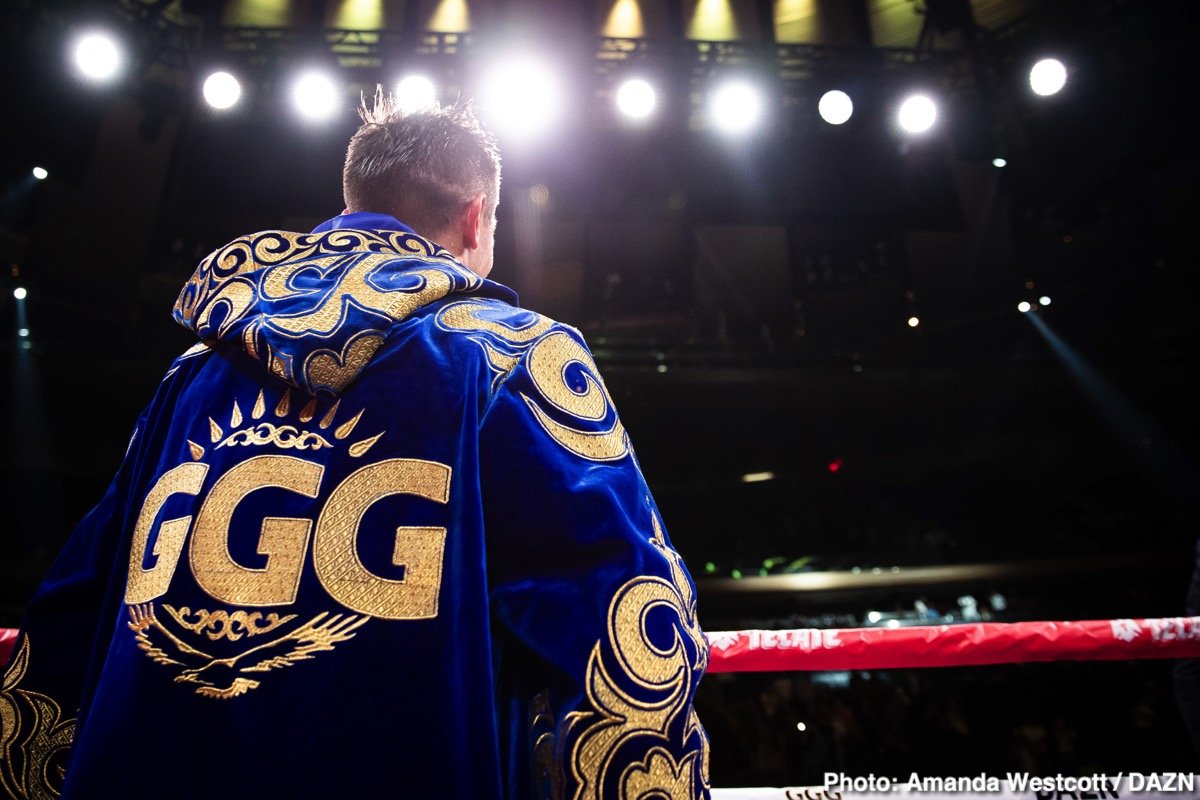 Eddie Hearn would like Gennadiy Golovkin to fight in September against Demetrius Andrade in a unification before his December clash against Ryota Murata in Japan.

It could prove impossible for Hearn to get Golovkin to fight a talented fighter like WBO middleweight champion Andrade (30-0, 18 KOs).

It’s rumored that DAZN wants Golovkin to fight a better opponent in his next match on their platform instead of Murata, a fighter that has beaten twice and hasn’t fought in almost two years.

It’s unclear why the WBA hasn’t stripped Murata for failing to make annual defenses of his title. They stripped Manny Pacquiao of his WBA welterweight belt, but for some reason, they’ve let Murata hold onto his middleweight strap.

Unless Hearn wants to drag Golovkin into the ring physically, he’s probably not going to agree to fight Andrade in September. Andrade is too dangerous, and it would require that Golovkin be willing to take a risk for him to take that challenge. 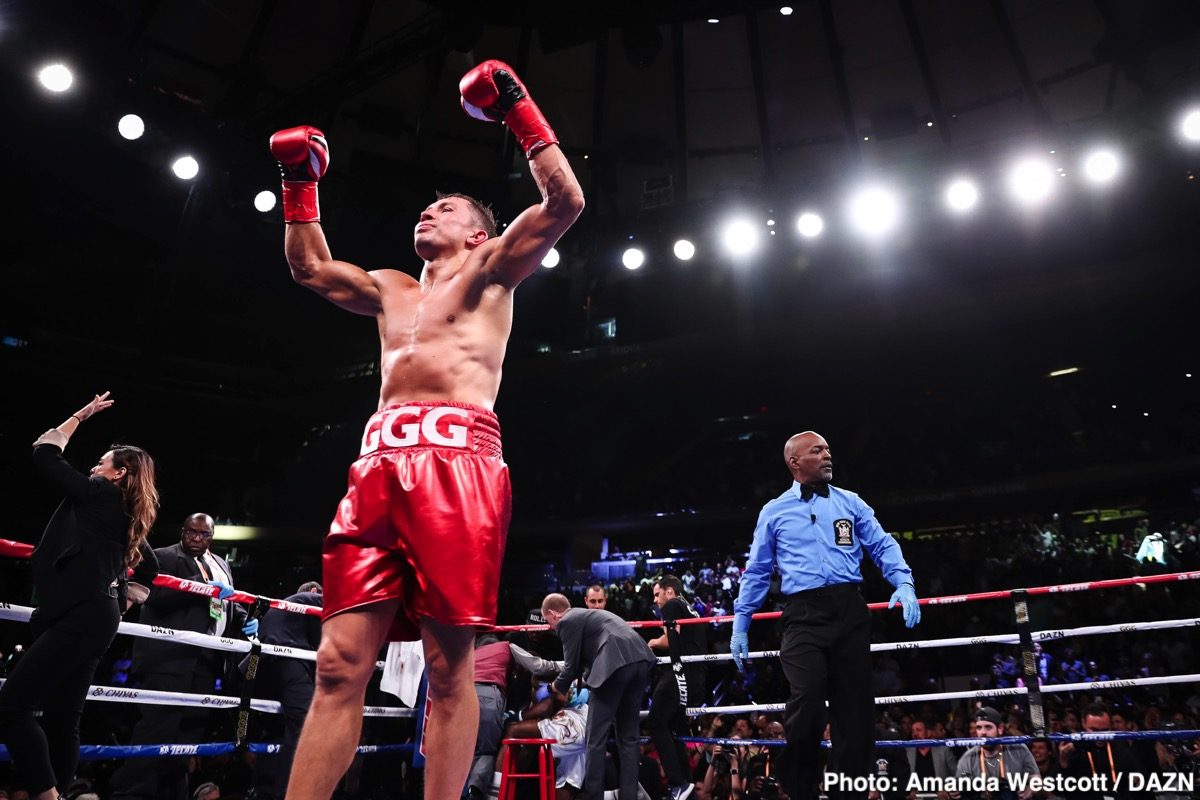 That’s a guy that is the complete opposite of the type of opposition that Golovkin has been facing since 2019. Golovkin has fought three times since 2019, beating these fighters: Steve Rolls, Sergiy Derevyanchenko, and Kamil Szeremeta.

The Matchroom Boxing promoter Hearn doesn’t want IBF middleweight champion Golovkin’s only fight in 2021 to be against WBA champion Murata (16-2, 13 KOs) because it would be an entire 12 months since GGG last fought against Kamil Szeremeta in December of 2020. That was an embarrassingly poor opponent for GGG.

Before that, Golovkin had been out of the ring for fourteen months since his win over Sergiy Derevyanchenko in October 2019.

All this inactivity and lackluster opposition has arguably hurt Golovkin’s career, as he’s no longer being seen by fans as often as he had in the past.

Moreover, Golovkin’s opposition has been less than stellar since his loss to Canelo Alvarez in 2018. It’s believed that Golovkin wants the trilogy fight with Canelo, but he’s not done anything to keep his popularity high by staying active and fighting the best since that loss.

That might be the reason why Canelo is not interested in fighting GGG at this point because he’s no longer trying to achieve. It’s as if Golovkin lost his ambition after his defeat against Canelo.

“The next step for him is to go and have a fight in Japan against [Ryota] Murata in a unification fight,” said Eddie Hearn to Boxing Social on who Golovkin will fight next.

“I think one of the issues behind the whole Golovkin stuff is that he was linked to the original Canelo and Golden Boy problems.”

Murata would be a business-level fight for Golovkin, as U.S boxing fans do not mention him as someone they want to see.

You can’t imagine DAZN being excited at the thought of Golovkin using up one of his remaining fights on his contract with them to fight the 35-year-old Murata.

With boxing fans not interested in seeing Golovkin fight Murata, DAZN won’t bring in many subscribers. It would be similar to Golovkin’s fights against Steve Rolls and Szeremeta. What was Golovkin thinking in picking those guys to fight on DAZN?

“Now he’s clearly looking to fight. I would like to see him fight in September because it would be a year from the [Kamil] Szermeta fight to the Murata fight, and probably a year before that or more than a year from that from his previous fight against [Sergiy] Derevyanchenko. 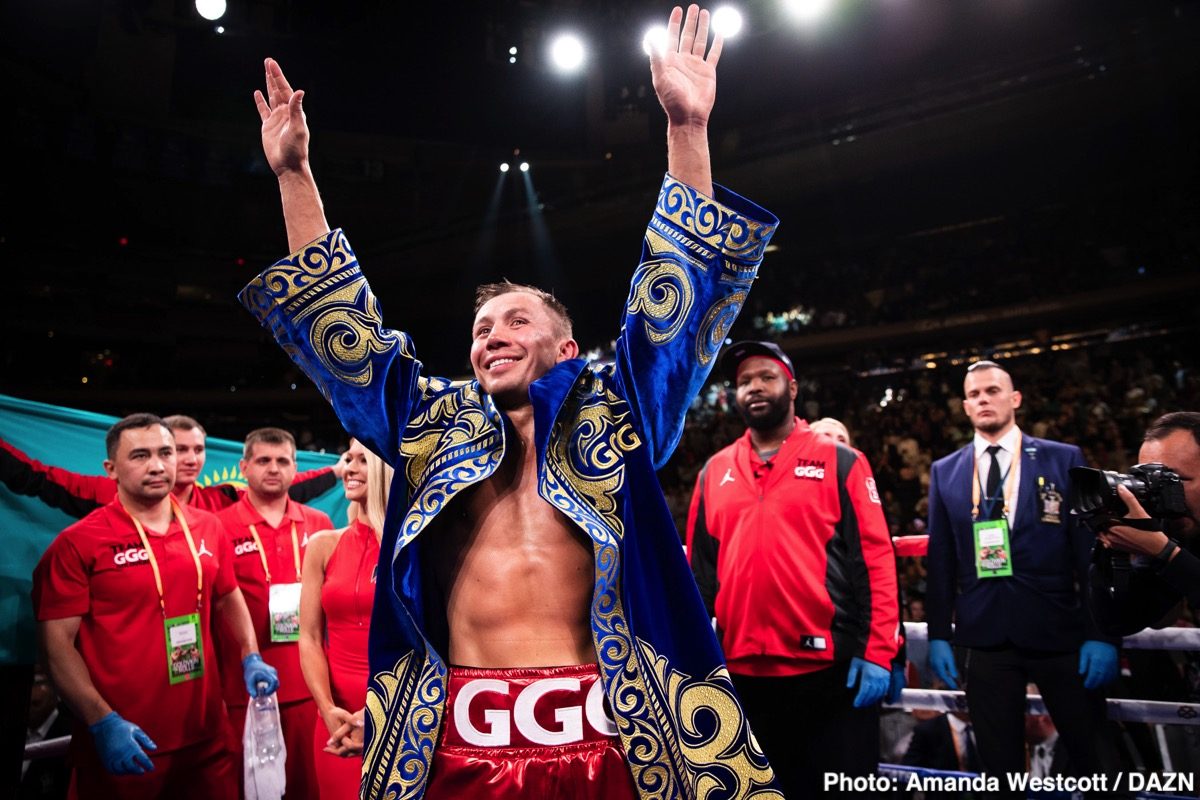 If he was to fight, he might want someone similar to the type of guys he’s been facing since he signed a contract with DAZN. In other words, a fringe-level fighter that would be an easy mark like his opponents Steve Rolls and Szcremeta were.

“Is there a Canelo – Golovkin 3? Who knows? I mean, at some point in his career, but for me, he will want to fight before Murata,” said Hearn. “It’s just a case of that negotiation between a fighter and the platform [DAZN] about dates, opponent, and so forth,” said Hearn.

It’s not likely that Canelo will ever fight Golovkin again, no matter how much money he can get for the fight.

Golovkin fighting only once a year against weak opposition; he makes it easy for Canelo to ignore him because he’s basically invisible to the boxing public now.

Even when Golovkin does fight with his once-a-year matches, he’s not getting much attention due to the low quality of his opposition.

You got to wonder whether Golovkin’s loss to Canelo took something out of him to leave him lacking the motivation to fight the best.

At this point, the only way Canelo will choose to fight Golovkin is out of sympathy for old time’s sake. That’s not enough of a reason for Canelo to give him a third fight.

Again, it goes back to Golovkin choosing to face nothing but low-quality opposition since his defeat against Canelo. DAZN obviously thought Golovkin would be a great addition to their team when they signed him to a contract.

Little did they know he would take obscure opposition in easy fights and only compete once a year. At this point, Golovkin’s chances of getting a third fight with Canelo are totally gone.

Even if Golovkin suddenly started fighting the elite-level guys like Andrade, Jermall Charlo, and David Benavidez, Canelo still wouldn’t fight him because he would likely lose to them.

“Obviously, he [Golovkin] wants the fight, and DAZN would like him to fight on the platform,” continued Hearn. “It’s a question for them.

“It’s a case of agreeing to a date and opponent and if that fight happens before the Murata fight,” said Hearn.

“Gennadiy has got in his head that Japan fight [against Murata] is something he wants to do, and it’s a great fight for him as well. So it’s just a case of if a fight can be made in September before that,” said Hearn.