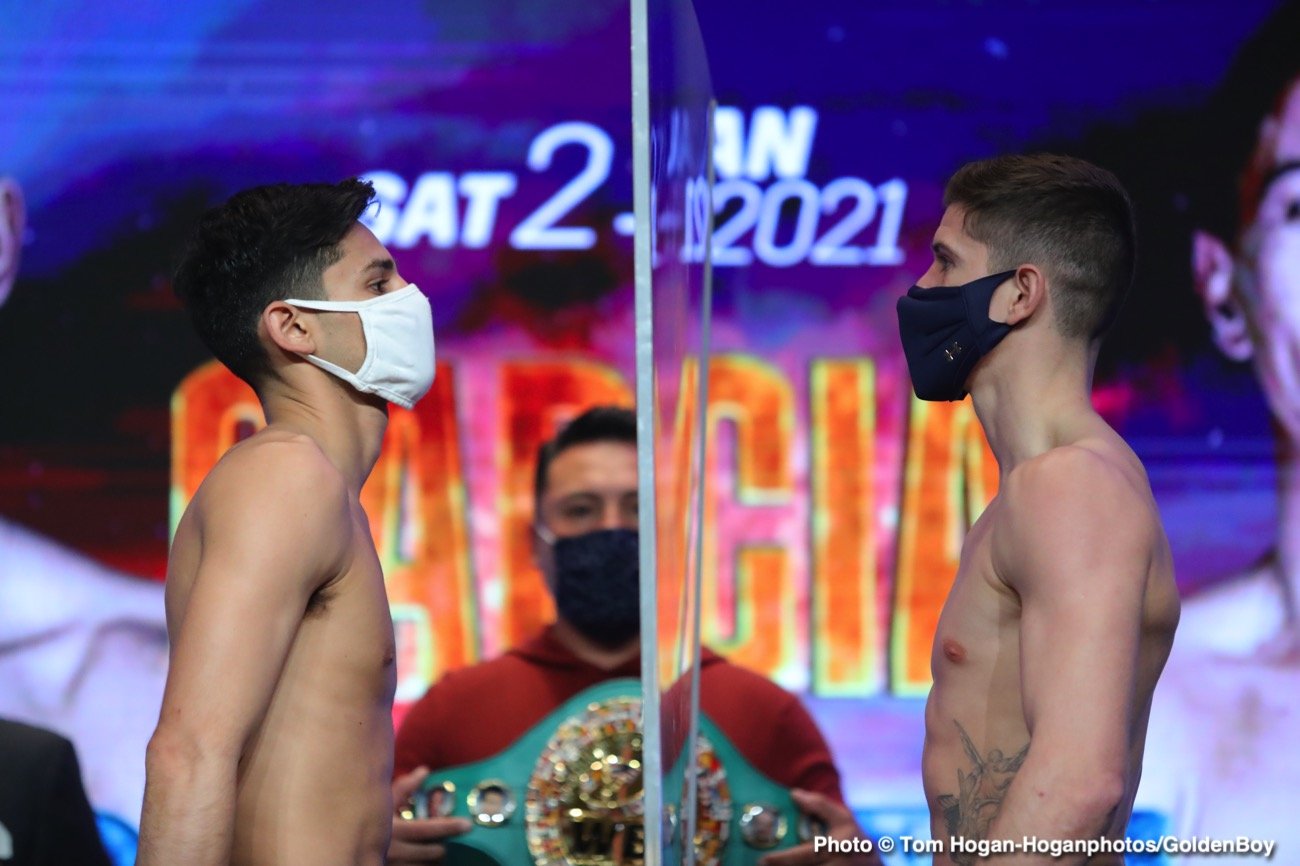 The greenhorn Garcia, 22, is facing Campbell on DAZN at the American Airlines Center in Dallas, Texas.

With De La Hoya and trainer Eddy Reynoso both believing that Ryan will be the #1 star in boxing soon, it’s crucial that he not only defeats the 2012 Olympic gold medalist Campbell tonight but do it in a way that shows that he’s capable of competing with the likes of Gervonta Davis, Teofimo Lopez, and Vasily Lomachenko.

f Ryan struggles to beat Campbell, then that’s obviously a sign that he’s not capable of becoming the top guy at 135, let alone the top fighter in all of boxing.

De La Hoya would like to see Ryan (20-0, 17 KOs) get some rounds in, and take the fight to the ninth before putting Campbell away. 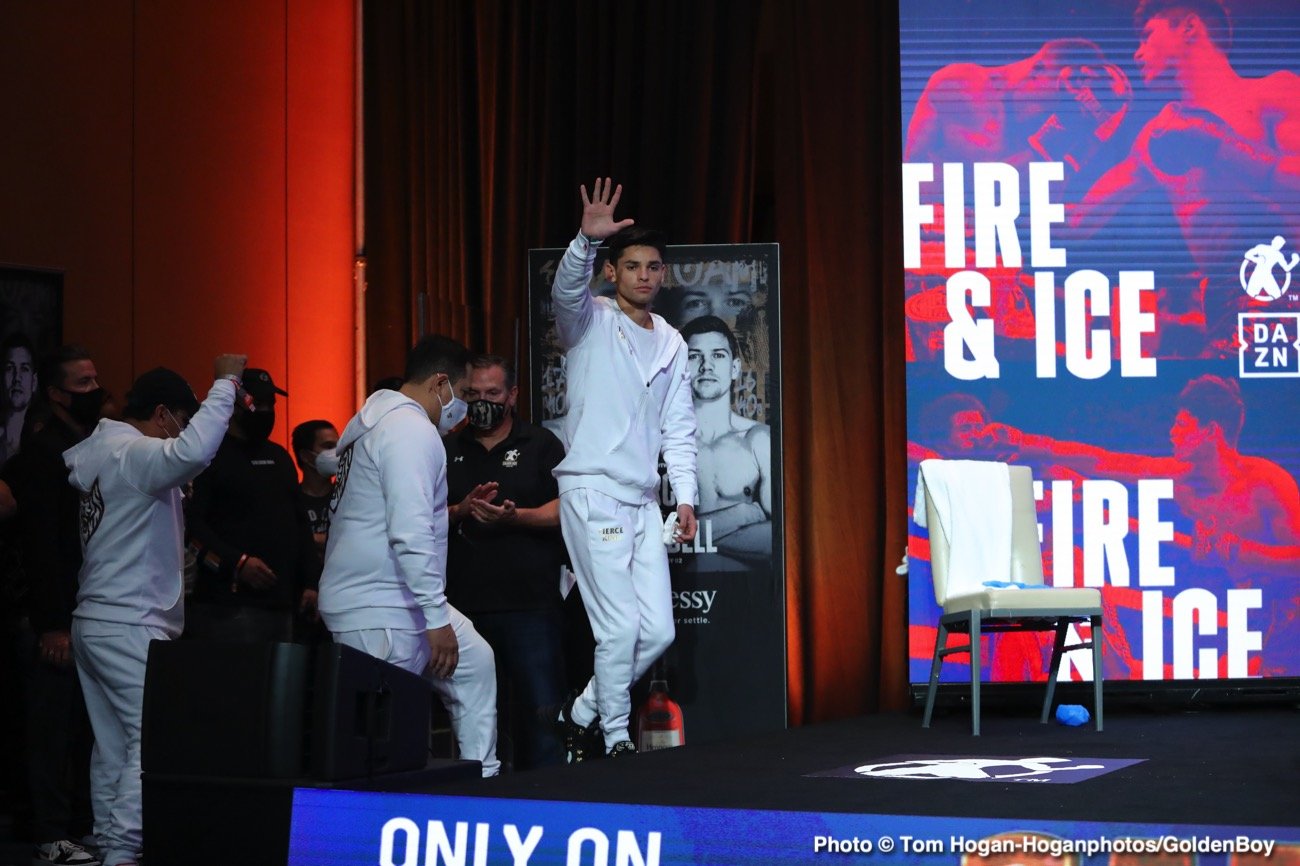 It’s important for Garcia, 22, to show the boxing public that he can go beyond the first half of his fights, as many people believe that he fades he’s unable to score an early knockout.

The perception the fans have about Ryan’s stamina issues are centered on how he gassed out against Carlos Morales after failing to knock him out in the first five rounds.

Morales was able to drag Ryan into the deeper part of the fight and batter him around the ring. Ryan’s composure crumbled, and he spent the last three rounds against Morales holding and running.

Although Ryan has looked better in his four fights since the Morales match, he’s not faced the same competition type. That’s why tonight’s with the 33-year-old highly experienced Campbell is so important.

“If you ask Campbell’s corner, they’re going to say he wins. It’s a war of words; it’s a war of psychological warfare, right? 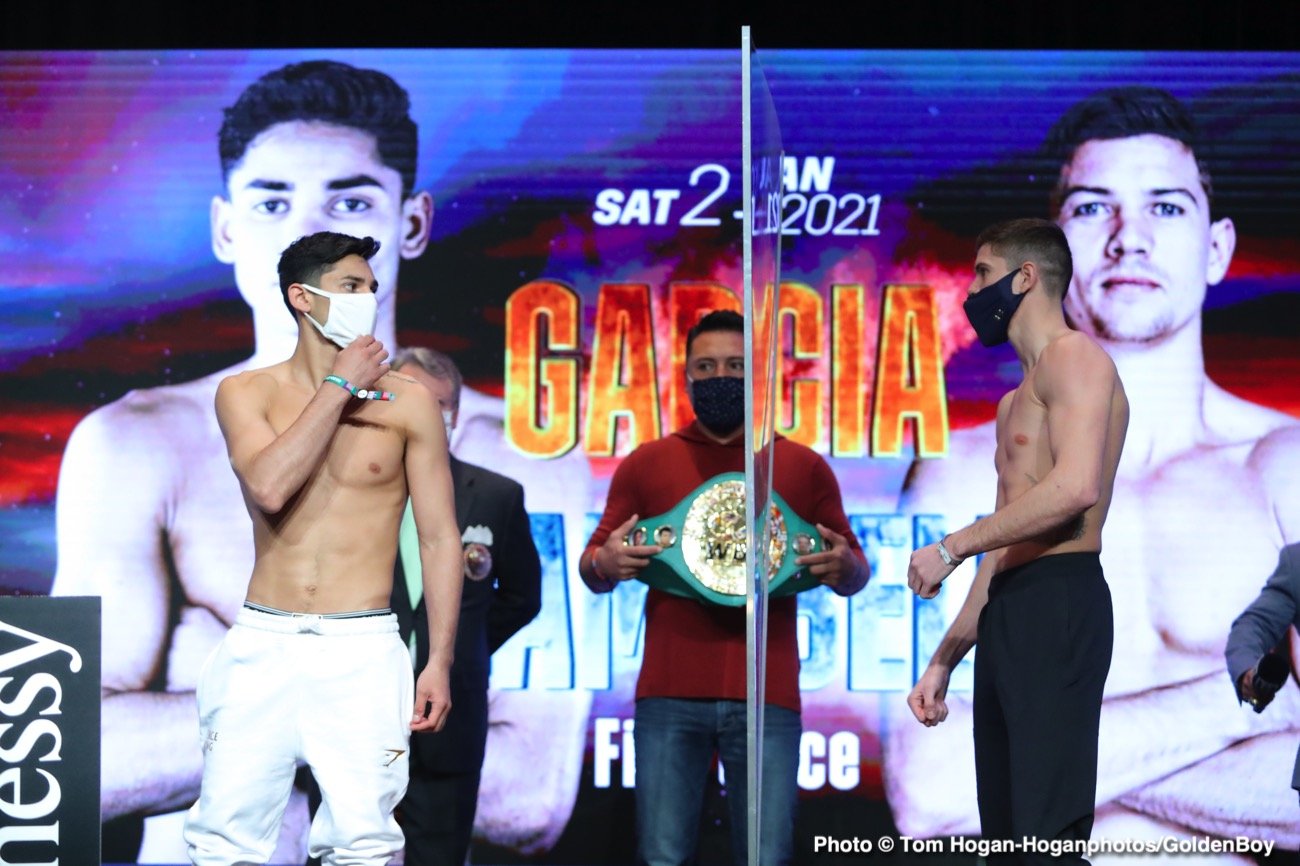 “You have to be careful, you have to have that separation between the fighter and the promoter,” said De La Hoya when asked if he’s given Ryan Garcia advice for the fight.

“I mean, I was a fighter myself once, and I really didn’t like my promoter telling me what to do. So I have to keep that distance, I have to respect that.

“Now, if he asks for guidance and advice, that’s a whole different story. I’m more than happy to give him all the advice he needs.

“It’s the right attitude to have because just because I made it in my boxing career and I’m a promoter, it doesn’t mean I can be a good teacher, or I can be a good counselor and give advice.

“It all just depends on how the fighter takes it. If he wants it, then absolutely I’ll be more than happy to,” said De Hoya on his attitude about advising King Ryan.

De La Hoya isn’t too worried about Ryan in this fight, as they’ve obviously studied Campbell carefully and deemed him as not a threat to him.

Campbell’s chin issues that he’s showed in his fights against Lomachenko, Yvan Mendy, and Algenis Mendez are what De La Hoya and Golden Boy’s matchmakers looked at when they decided to give Ryan the green light to take this fight.

If Campbell beats Ryan, De La Hoya will need to reassess his belief about his fighter and think of a different direction to take with him.

Ryan Garcia can still become a star even if he loses to Campbell, but De La Hoya will need to be more directly involved in the match-making process.

It won’t work if Oscar let’s the young 22-year-old Ryan call the shots when it comes to his match-making, as he’s overconfident and doesn’t seem to grasp how risky it is for him to take on someone like Tank, Teofimo Lopez, or Lomachenko at this early stage of his career.

De La Hoya: Ryan will do anything necessary to win

“Sure, why not, absolutely,” said De La Hoya when asked if he wants to match Ryan Garcia against Teofimo Lopez if he beats Campbell.

“Take him into the deep waters,” De La Hoya said to Fino Boxing when asked what he wants to see from Ryan Garcia against Campbell. 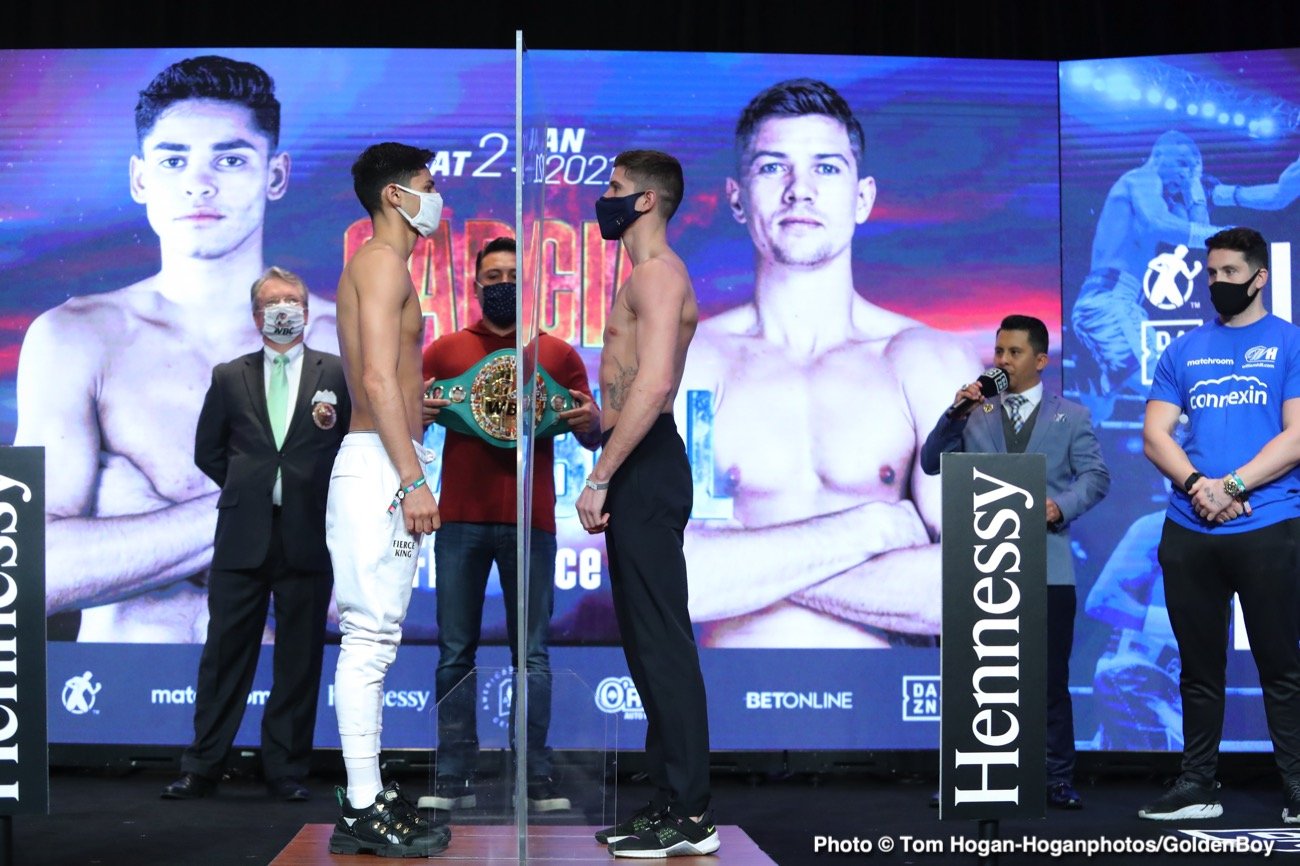 “I think Luke Campbell is a phenomenal fighter. He’s not only an Olympic gold medalist, but he’s also been in there with some tough competition.

“He certainly has the abilities, but we’ll have to wait and see,” said De La Hoya when asked if Ryan Garcia has the ability to knockout Campbell.

“That’s the beauty about boxing; you never know what’s going to happen. In boxing, one punch can change everything. I’m confident that both guys are in great shape, ready physically and mentally. Yeah, it’s going to be a good fight.

“Him getting a victory will mean everything, and to the boxing world in general,” said De la Hoya about what a victory for Ryan Garcia over Campbell will mean. “If you think about it, you have a young kid [Ryan] where the world champions are calling him out.

“That’s unique. I’ve never been in that type of situation myself. When you’re in that position, you’ve got to take advantage of it.

“The only way you’re going to take advantage of it is by always being prepared, and always being ready. He [Ryan Garcia] takes his craft very seriously; he’s a hard worker.

It sounds like De La Hoya isn’t quite sure how tonight’s fight between Ryan and Luke will end. Oscar is like everyone else; they’re not sure how Ryan will handle the more experienced Campbell.

Tank Davis could be next for Ryan Garcia

“Why not Tank Davis?” said Oscar when asked what fight he’d like to see for Ryan Garcia after Campbell.

“That’s a great fight; I like it. Somebody asked me three years ago, ‘Would I put Ryan in with Tank?’ And I said, ‘No, he’s too tough.’ 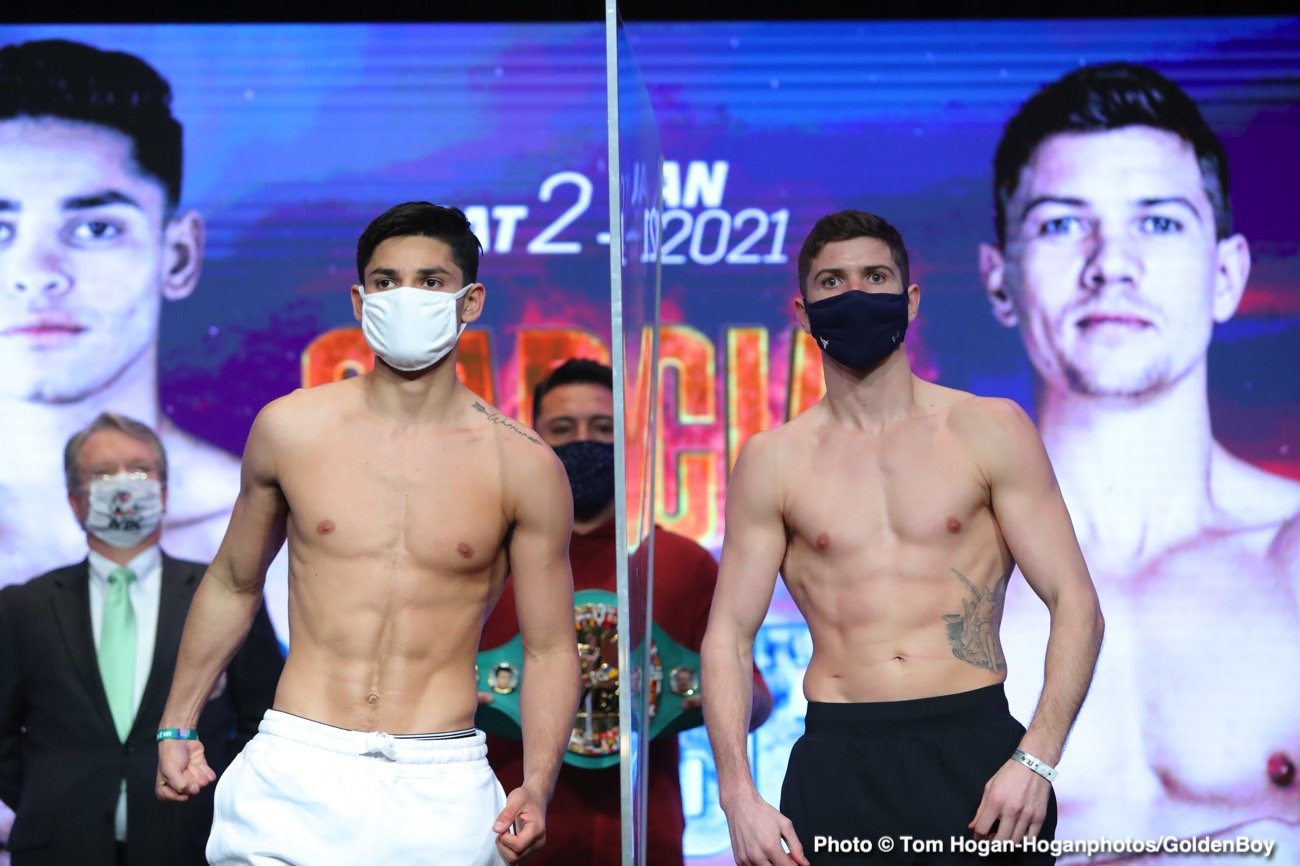 “But I would do it now because of Ryan’s ability to progress and to grow, and he’s getting stronger and getting faster. The more you wait on Ryan Garcia, the more it’s going to be dangerous for you.

“Try to get him in the ring now because he’s only getting better,” said De La Hoya of King Ryan.

It would be a good idea for De La Hoya to give Ryan one more step up fight before throwing him in with the unbeaten WBA lightweight champion Gervonta ‘Tank’ Davis (24-0, 23 KOs).

Tank, 26, is older than Ryan, and he’s got a lot more experience against top opposition.

While Tank didn’t look that great in his last fight against Leo Santa Cruz, his punching power is incredible. Whatever deficits that Tank has, his power makes up for it. If Ryan faces Tank right away, it could end badly for him.