Alexander Povetkin’s knockout win over Dillian Whyte has woken him up and motivated him more than ever to return the favor in their rematch.

Interestingly, Whyte is only going to give himself 10 to 12 days of rest after his brutal knockout loss to Povetkin before starting training camp for their rematch.

It’s evident that if Whyte gets blasted out in the rematch by Povetkin, fans are going to second-guess his and his promoter Eddie Hearn’s decision to take the fight so soon.

In all sports, when someone had been knocked unconscious, they want to that athlete rest and recover. Whyte’s not doing that. He’s only going to give himself two weeks at the most before he starts training for the rematch.

It sounds illogical, but oh well. If nothing else, Whyte will have an excellent excuse to pin the blame on for the second knockout loss to Povetkin.

Whyte could then tell the boxing world, ‘This time I’ve learned my lesson. I’ll rest six months before I take another important fight.’ It’ll look wretched for sure, but, predictably, that’s how he’ll play it. 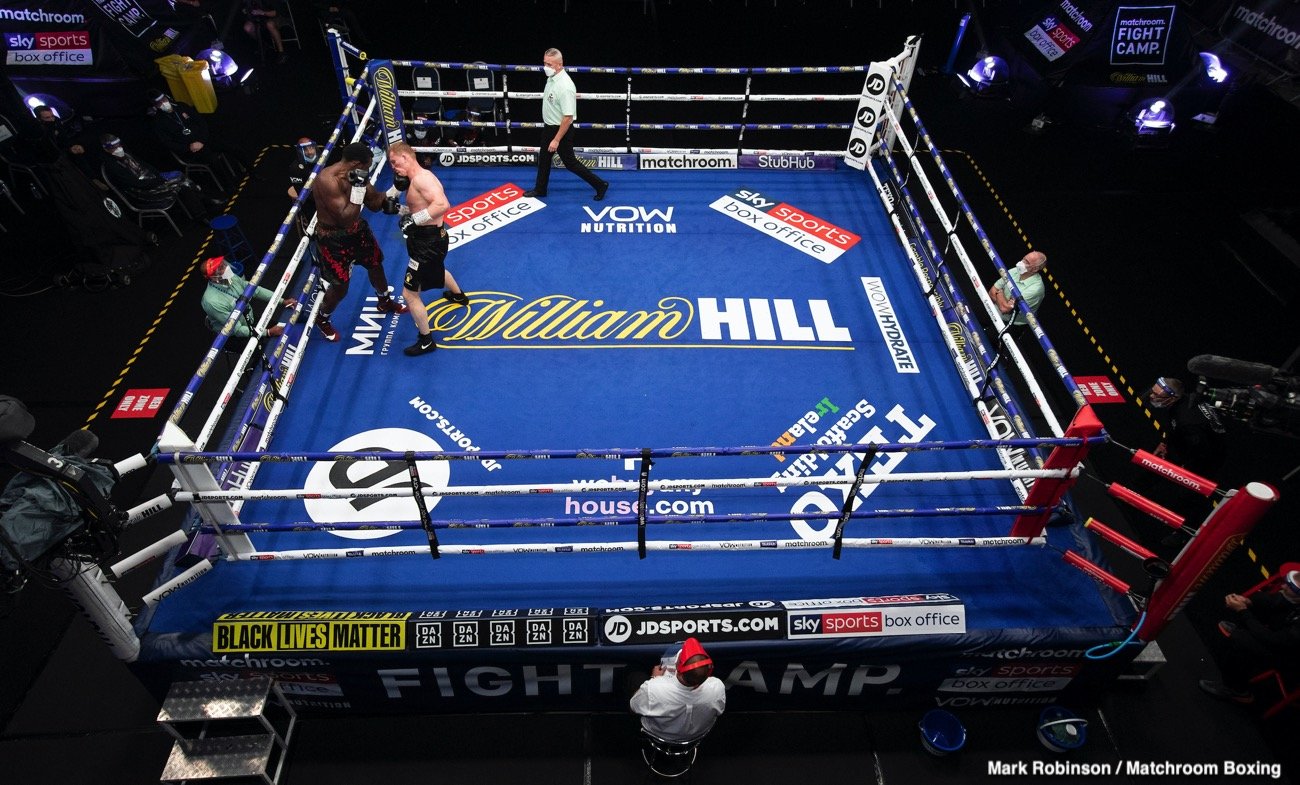 Whyte (27-2, 18 KOs) made a momentary mistake last Saturday, and boy did he pay for it in getting stretched in the 5th round courtesy of a left uppercut from the Russian heavyweight Povetkin (36-2-1, 25 KOs) at the Matchroom Boxing Fight Camp.

Whyte says the rematch with Povetkin could take place in November or December. The fight will be happening 100%, and Povetkin has already acknowledged that he’s agreeable to it.

Povetkin rematch being worked on

His promoters would like to stage the rematch in Russia, but it could wind up back in the UK if Whyte’s promoter Eddie Hearn gets his way.

He’s not going to want to watch Whyte’s career go down the drain with a second defeat, so it’s almost a certainty that the second contest will take place somewhere in the UK. Whyte needs any and every advantage he can get at this point.

“We’re working on the rematch right now. Hopefully, we can get it in November or December time.

Trust me, in the rematch, I’m going to knock Povetkin out,” said Whyte on social media in predicting a knockout win.

Whyte needs to calm down

It would be better for Whyte to think about trying to get the win period against former WBA heavyweight champion Povetkin.

Dillian has a bad habit of fighting with emotion rather than staying calm and using his head to win fights. It’s safe to say that if Whyte goes in there swinging for the fences against Povetkin in the rematch, he’s going to get knocked out cold again.

Whyte already paid the price in getting knocked out when he got too aggressive for his own good against the highly experienced 2004 Olympic gold medalist.

Hearn said in an interview this week that if Whyte loses the rematch with Povetkin, he’ll then match the 32-year-old Dillian up against Queensbury heavyweight Daniel Dubois.

You can read between the lines what that means. Whyte would be on borrowed time with his career. Once Hearn starts using Whyte as an opponent for other promoters’ heavyweights, you can tell that it won’t be long before his career is finished.

Whyte was never as good as people thought he was all this time. He could have lost both Chisora fights, and he was on the verge of getting beaten by Joseph Parker in 2018.

Parker had Whyte down on the canvas in the 12th and ready to be stopped.

Oscar Rivas knocked Whyte down in the 9th round with an uppercut last year and had him hurt in the 12th round from a body shot.

The referee then stepped in and stopped the action to warn Rivas for what he thought was a low blow. Some would say the referee saved Whyte from a knockout against Rivas.  The signs have been there all along that Whyte isn’t the fighter that some believed him to be.

Dillian is excited about the rematch

“I’ve never been this excited for a fight before in my life,” said Whyte to Sky Sports Toe to Toe in describing what he’s thinking about wanting to get revenge against the 40-year-old Povetkin.

“I was excited about the first fight. Now, it’s like turning pro all over again. I’m buzzing. I want to go to training now. I’m forcing myself to take the two weeks’ rest.”

The reason Whyte is excited is that he thinks he’s going to win this time, as he believes that Povetkin’s knockout victory was just a take. Whyte was getting the better of Povetkin in the 4th round after knocking him down twice, but the first three rounds even.

It wasn’t as if Whyte was dominating every round of the fight, and it would be a sure thing that he wins the rematch.

Whyte needs to understand that he cannot fight with emotion against a seasoned pro like Povetkin because he’ll take advantage of his amateurish style of fighting and knock him out every time.

Hearn is setting up this rematch with Povetkin, but he can’t keep doing this. I mean, if Povetkin knocks Whyte out again, Hearn can’t set up a trilogy match because it would be forlorn at that point.

Boxing fans would no longer be interested in watching Povetkin and Whyte continue to fight because they would know what the results are going to be.

What Whyte needs to understand is Povetkin is a lot smarter than the guys that Hearn has been feeding him for the last five years.

Yes, Whyte had won his last 11 fights leading up to the Povetkin clash, but they were against mediocre heavyweights like journeymen Dereck Chisora, Mariusz Wach, and a washed-up 40-year-old Lucas Browne.

The only quality heavyweight that Whyte had fought in the last five years going into his fight with Povetkin was Joseph Parker, and he was never a great fighter either.

Andy Ruiz Jr had gotten the better of Parker in his own home country in New Zealand in December 2016, but the judges gave Joseph a controversial decision.

“It’s all good. I learn quickly. I just can’t wait to get back in there. I want to go now,” said Whyte.

“I have been hounding Eddie every day to hear what they are saying about this rematch.”

If Whyte learns quickly, he should be giving himself more time to rest than just 10 to 12 days after his knockout loss. Whyte is in the same situation Deontay Wilder is in coming off of a knockout loss and needing to take a rest. Wilder isn’t going to get that ret, and neither is Whyte.

Getting knocked out has made Whyte fell young

The pandemic has actually helped Wilder get time to recover from his knockout loss to Tyson Fury last February. Those two were supposed to fight their trilogy match in July, but the COVID-19 situation got in the way of the fight. Now they’re supposed to be fighting in December.

That’ll depend on whether boxing fans are allowed back into events. If not, then we ould see Wilder and Fury fighting in February. That would give Wilder a full 12 months of rest.

It’s hard to see what improvements Whyte is making in his game. He fights the same way every time, and he’s straightforward to hit.