Porter rushed Malignaggi right from the opening bell and opened up a cut on Malignaggi’s cheek in the first round. In the second round, Malignaggi was clearly hurt by a leaping left hook from the champion. 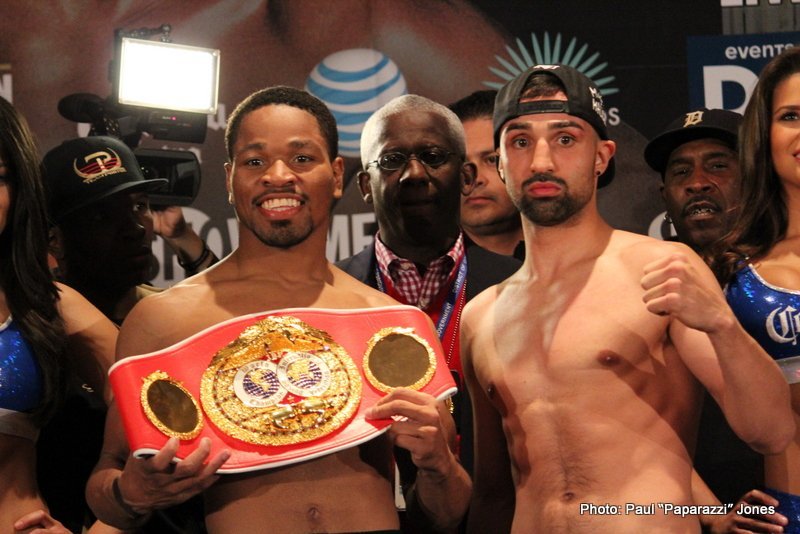 Paulie Malignaggi challenges Shawn Porter for Porter’s IBF Welterweight belt that he won off Devon Alexander last December. The inconsistent Porter looked much improved but can he put his skill and strengths together in back to back performances?

This co-feature fight could go either way with Porter being the betting favorite amongst fans, writers, and betting sites. The style matchup and how it will play out has been bouncing around my brain for some time now to the point that I’m still pulling my decision as I write this article.

Paulie Malignaggi’s career accomplishments fit the “Magic Man” nickname perfectly. A guy with no power to speak of yet still was able to make the fighters and fans respect him. 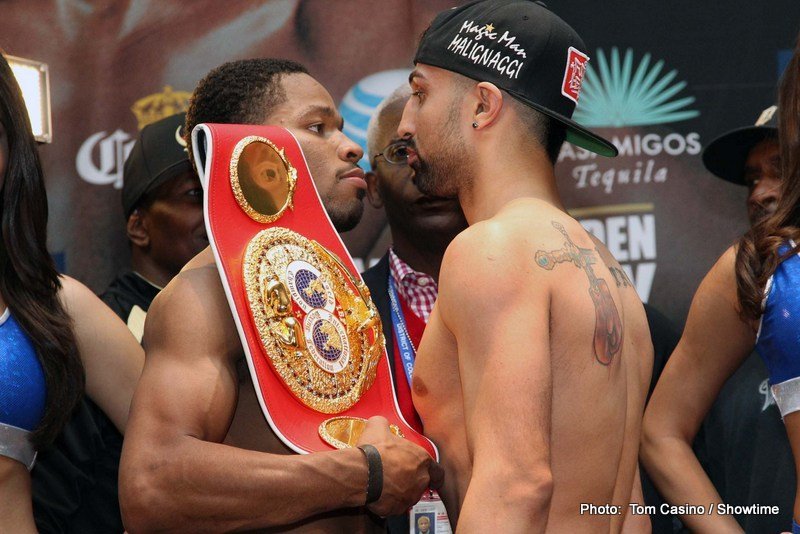 Paulie Malignaggi has vowed to claim his third world title this weekend after he felt he was unjustly stripped of his belt against brash-talking Adrien Broner.

The Brooklyn star goes in against the newly crowned IBF welterweight champion Shawn Porter this Saturday night, live on BoxNation, on a stacked card headlined by the ageless Bernard Hopkins who faces Beibut Shumenov in a light-heavyweight world title unification.

But, it is the matchup between the slick Malignaggi and the all-action Porter which has the potential to steal the show, with the seasoned New Yorker adamant that he will bounce back to win his third world title following the loss of his WBA crown to Broner last year.

WASHINGTON, D.C. (March 17, 2014) – Two world championship fights on one night is great for boxing fans. But Golden Boy Promotions and SHOWTIME believe that three is even better. So, on Saturday, April 19, joining the title fights between Bernard “The Alien” Hopkins and Beibut Shumenov and Peter “Kid Chocolate” Quillin and Lukas Konecny there will be a battle for the IBF Welterweight World title between champion Shawn “Showtime” Porter and former two-time and two division word champion and current NABF Welterweight titleholder Paulie “Magic Man” Malignaggi, making this tripleheader at the D.C. Armory in Washington, D.C. a must see.

“I fought hard to get this title. Paulie says he wants it, but is he willing to go through me to get it?” said Porter, who won his crown with an impressive win over Devon Alexander last December. “Fighting Malignaggi is like fighting Alexander. They don’t have the strength or power to keep me away, and I will steamroll Paulie on my way to victory April 19.”

Texas-based slugger Roberto “La Amenaza” Garcia (34-3, 22 KOs), fresh off an exciting and impressive ESPN-televised victory over Mexico’s Norberto “Demonio” Gonzalez on February 7, says he’s dropping down to his natural weight of 147 lbs to begin campaigning as a welterweight.

33-year-old Garcia, who came into the fight against Gonzalez as a late substitute opponent, revived his career with his controlled, pressuring performance. He has now set his sights on obtaining a title shot against one of the current champions including IBF Champion Shawn Porter and especially interim WBA World Champion Keith Thurman. Anand G. (San Antonio, TX): Manny Pacquiao is now the mandatory challenger for Floyd Mayweather’s WBC strap. How do you see this set of negotiations going between the two camps now that there’s a governing body both men respect at the center of it?

Vivek W. (ESB): At the core of this drama between the two camps, we’ve seen it all and heard it all, but this new wrinkle marks a first! With Pacquiao being a mandatory challenger, it puts Mayweather in an odd situation. He owns the upper hand at the negotiating table, but does Pacquiao’s mandatory challenger position carry enough weight to force Mayweather into taking a deal that isn’t commensurate to what he rates at this stage of his career? No! Not at all. That said, I do think it serves as a breeding ground for new results. One thing few have considred is the fact that contrary to popular belief, Pacquiao doesn’t have an exclusive deal with HBO.