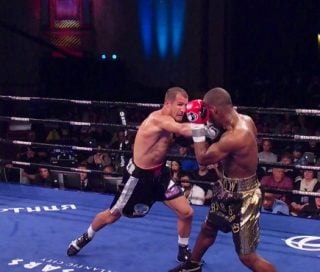 Recently, ESPN named Terence Crawford as their Fighter of the Year for 2014 due to his wins over Raymundo Beltran, Yuriorkis Gamboa and Ricky Burns. However, only the Gamboa fight was truly interesting to watch, and the Burns fight really proved nothing given how poor Burns has looked since then.

Gamboa is really a pumped up featherweight who had no business fighting in the lightweight division against a fighter the size of Crawford. The Crawford-Beltran fight was not an interesting fight to watch due to Crawford’s constantly clinching each time Beltran would get in position to throw a punch. It was not great television, believe me.

Read moreDoes Sergey Kovalev deserve Fighter of the Year for 2014?

Boucherville, Wednesday December 17th 2014 – Main-Events and InterBox announced that the Montréal Bell Centre will host the March 14th 2015 boxing Gala that will feature the reigning unified WBO, IBF and WBA Light Heavyweight World Champion, Sergey “Krusher” Kovalev (26-0-1, 23 KOs) vs. former WBC, IBO and The Ring Light Heavyweight Champion, Jean Pascal (29-2-1, 17 KOs). Tickets to this megafight, which will also be broadcast on HBO World Championship Boxing throughout the United States, go on sale Saturday, December 20th 2014 as of 10 AM. A press conference is scheduled to take place early next week. 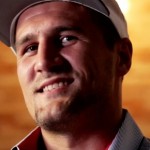 IBF/WBA/WBO light heavyweight champion Sergey Kovalev (26-0-1, 23 KOs) is looking to get an exception by the International Boxing Federation in order for him to bypass #1 IBF mandatory challenger Nadjib Mohammedi so that Kovalev can defend his titles against 32-year-old former WBC 175 pound champ Jean Pascal (29-2-1, 17 KOs) on March 14th next year at a still to be determined venue.

With WBC champion Adonis Stevenson taking his time in defending his title against Pascal, Kovalev is looking to move on in and take out Pascal before Stevenson has a chance. It will then give Kovalev an opportunity to beat Pascal before facing Stevenson at some point in the future if he can get him to agree to the fight.

Read moreKovalev looking for exception with IBF to face Pascal 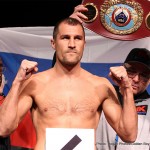 Main Events and InterBox are proud to announce that an agreement has been reached to present a fight between the reigning unified WBO, IBF and WBA Light Heavyweight World Champion, Sergey “Krusher” Kovalev (26-0-1, 23 KOs) and former WBC and The Ring Light Heavyweight Champion, Jean Pascal (29-2-1, 17 KOs). The fight is to take place in Montréal or Québec City on Saturday, March 14, 2015, but it is contingent on Pascal prevailing over Bolonti on December 6 and on the IBF granting Kovalev a special exception to postpone his mandatory title defense against Nadjib Mohammedi.

This mega-bout will be televised live in the United States on HBO. Further details will be announced at a later date. Pascal’s fight at the Bell Centre December 6 was already a very important one for his career, but this possibility brings it to a whole new level. Kathy Duva, CEO of Main Events, will be watching the fight with Jean Bédard, as she has accepted the invitation extended by the InterBox president to join him ringside at the gala.

“Hello everyone thank you so much for everything. I already changed diapers. I already lost track of how many diapers, maybe 15 or so. It is easy because I have experience with my nephews. My older sister has two babies so I have done this a lot. Beating Hopkins is a little bit more dangerous than changing diapers but he peed on my hand when I changed him. It is most important to be here with my family.

Read moreKovalev Settles In as Unified Champ and New Dad 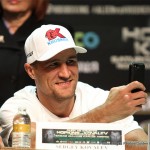 Sergey “Krusher” Kovalev 25-0-1(23KO) managed to bundle up three light heavyweight titles (WBA, IBF, & WBO) with his one-sided win over Bernard Hopkins at the Boardwalk Center, Atlantic City, N.J. The main point of interest, prior to the opening belt, was an expectation that sooner or later the experienced oldster Bernard “Alien” Hopkins 55-7-2 (32KO) would manage to set a trap. When the bait was taken, Hopkins would nail the Russia hard enough to start the ball rolling in his favor. After all, the Krusher, according to Hopkins, was a crude brawler, whose defense was porous, someone ready to be exploited.

The main reason or interest in the fight was Hopkins’ advanced age, and that carried through, even thought the ring action was one-sided. But, unlike other one-sided affairs, there remained the faint hope in the wily old fox. Might he once again shock the boxing world? The odds were against it. The likelihood of an upset grew even fainter when Philly’s own went down from a glancing right hand in the first round. The question of whether Krusher could hurt the veteran was answered.

Read moreSergey Kovalev Does The Job And Gives Good Advice 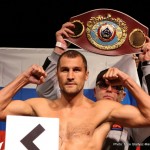 The pre-fight build up and the suspense had obviously gotten to both Sergey Kovalev and Bernard Hopkins as they showed uncharacteristic body language while waiting for the opening bell on Saturday night at Boardwalk Hall in Atlantic City, New Jersey. Kovalev was unusually restless and had an urgent expression while Hopkins’s face was hidden behind his new mask but he looked artificial and stiff walking aimlessly around the ring. Hopkins tried too hard to appear nonchalant and refused to touch gloves with Kovalev who tried to show respect to the veteran but cared little for his mind games.

Round 1- timing is of the essence. Kovalev lost all respect after the bell, he took center ring and stalked Hopkins who openly refused to engage and started trying to buy time while conserving energy. “The Krusher” did not rush forward; he gave Hopkins the courtesy of “feeling him out”, adjusting the range and testing his reflexes. Midway through the round Kovalev’s demeanor changed, he raised his head from behind the guard, his expression softened and he started “walking in the park”, it was his fight already and he knew the reason.