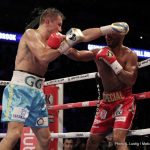 By Jason Gonzalez, Real Combat Media.com: Gennady Golovkin (36-0) took on Kell Brook (36-1) this Saturday at the O2 Arena in Greenwich, London. Golovkin won the fight by TKO in the fifth round after Brook’s corner decided that Brook had taken enough punishment. Leading up to the fight Golovkin was under major scrutiny for deciding to fight a guy who is two weight classes under him. Even though the fight did end early as many predicted boxing fans and critics learned at least one thing that night; Golovkin can be hurt. It was obvious from round one that Golovkin’s power was to much for Brook, but there was several times where Golovkin did look vulnerable. This is something that had not been seen before. Before this fight it looked like Golovkin was this invisible monster at Middleweight who would destroy Saul Canelo Álvarez. Now it seems as if Golovkin has a chink in his armor. 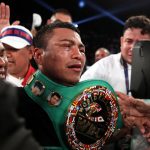 In a fight that lived up to it’s billing and the strong legacy of historical fights at The Fabulous Forum, Gonzalez and Cuadras battled at an extraordinarily high pace amidst loud chants of “Nicaragua” and “Mexico” throughout the fight. 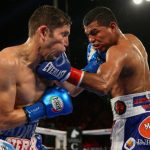 WBC super flyweight champion Carlos “Principe” Cuadras (35-1-1, 27 KOs) didn’t have the engine to defeat unbeaten challenger Roman “Chocolatito” Gonzalez, (46-0, 38 KOs) in getting beaten by him by a 12 round unanimous decision on Saturday night at The Forum in Inglewood, California. Cuadras, 28, had the youth, power, weight and height to beat Gonzalez, but he didn’t have the heart or the stamina.

In the end, the 28-year-old Cuadras was beaten by the smaller Gonzalez because of his inability to stand his ground and fight in an old fashioned way. When the fight called for Cuadras to stand and trade in the championship rounds, he spent it on his bicycle trying to keep away from the 29-year-old Gonzalez. When Cuadras was trapped by Gonzalez on numerous occasions in each round, he would resort to holding to stop Gonzalez from landing his shots. The judges didn’t like Cuadras’ fighting style and they gave Gonzalez the fight by the scores of 117-111, 116-112, and 115-113. 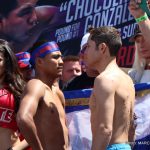 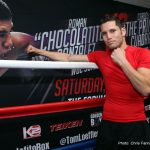 All four HBO World Championship fighters for this Saturday’s September 10 event at The Fabulous Forum worked out today for a huge crowd of Los Angeles media at the Wild Card West Boxing Gym in Santa Monica, CA.

This will be the 1,942nd fight sanctioned by the WBC in its 53-year history. 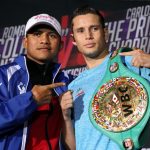 Also in attendance at the press conference were co-featured HBO World Championship Boxing fighters, Yoshihiro Kamegai, (26-3-2, 23KO’s) and Jesus “Renuente” Soto Karass, (28-10-4, 18 KO’s) who will compete in a 10-round junior middleweight rematch of their epic 2016 “Fight of the Year” candidate clash which took place on April 15 in Downtown Los Angeles. 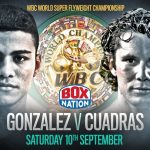 BoxNation subscribers are set to enjoy a blockbuster next few weeks starting with pound-for-pound king Roman Gonzalez who moves up in weight to take on undefeated knockout artist and WBC super-flyweight world champion Carlos Cuadras.

The unbeaten three-time world champion Gonzalez, with a record of 45-0 with 38 KOs, is regarded by many as the finest boxer around and will test himself by going up to 115-pounds for the first time to challenge Cuadras, 35-0-1 with 27 KOs, for his WBC strap. 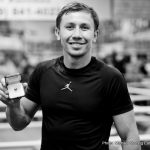