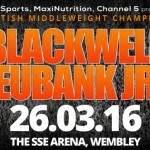 The explosive clash between world-class middleweights Blackwell and Eubank Jr. headlines a stacked fight card which also features heavyweight sensation Hughie Lewis Fury in a scheduled 12-round contest against a world-ranked opponent.

Hennessy Sports are delighted to announce they have won the right to stage the British middleweight title fight between champion Nick Blackwell and number one challenger Chris Eubank Jr. in 2016.

Promoter Mick Hennessy submitted the highest purse bid this afternoon – amid fierce competition from Frank Warren and Eddie Hearn – and will now look to secure a date and venue for the Blackwell vs. Eubank Jr. fight in the coming weeks.

Middleweight star Nick ‘Bang Bang’ Blackwell will aim to make it three big knockout wins in a row on November 14, when he headlines a Hennessy Sports in association with Sanigar Events show at the City Academy, Bristol, LIVE on Channel 5.

The ever improving Blackwell is still only 24 years of age and his 3 defeats have all come at the hands of solid European and world level fighters in Martin Murray (2011), Billy Joe Saunders (2012) and former EBU champion Max Bursak (2013) in fights he arguably took too soon.

Reigning British middleweight champion Nick Blackwell one day hopes to win a version of the world middleweight title, but knows such plans will go up in smoke should he lose his Lonsdale belt to Damon Jones on July 25 at Derby Arena.

Leeds’ Damon Jones claims he will win the British middleweight title this Saturday (July 25) at Derby Arena in memory of his late father, Gareth, who sadly passed away last October.

The unbeaten challenger faces champion Nick Blackwell in what will be his first title fight and, despite a difficult last nine months, believes he has come to terms with his tragic loss and is more than ready to lift the Lonsdale belt.

Leeds’ Damon Jones is adamant that British middleweight champion Nick Blackwell will only encounter a world of pain should he attempt to rush in and force the pace when the two meet on July 25 at Derby Arena.

Busy British middleweight champion Nick ‘Bang Bang’ Blackwell is intending to cut challenger Damon Jones down to size on July 25 in Derby and then swiftly book a well-deserved holiday.