British middleweight champion Chris Eubank Jr has offered to return his Lonsdale belt to its former owner, Nick Blackwell, despite not owning the belt outright.

In good news, Nick Blackwell has felt well enough to return to Twitter, for the first time in a month. As fans know, the gutsy middleweight engaged in a brutal fight with Chris Eubank Junior and was placed in an induced coma shortly after lapsing into unconsciousness after the 10th-round stoppage defeat. Thankfully, no brain surgery was needed and Blackwell, who regained consciousness a week after the fight, now says he is “on the mend.”

On Saturday, April 2, 2016, Nick ‘Bang Bang’ Blackwell woke from an induced coma. Twenty-four hours later, on Sunday, he was talking to family and close friends at his bedside.

Nick had been placed in an induced coma following a British middleweight title contest at The SSE Arena, Wembley on Saturday, March 26. Contrary to early reports, though, his bleed was outside the brain – on the skull, in fact – and was minor enough for there to be no need to operate. 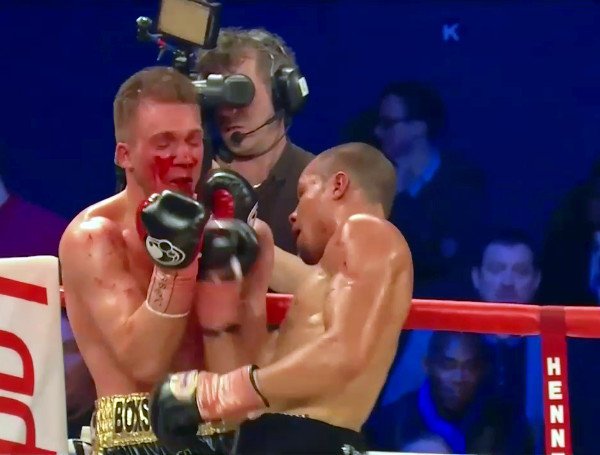 Tonight at Wembley, bitter middleweight rivals Chris Eubank Junior and Nick Blackwell went to war in a domestic fight of the year candidate. Blackwell lost his British middleweight title by way of a 10th-round TKO when referee Victor Loughlin, on advice of the doctor, stopped the fight due to a quite horrific swelling to Blackwell’s left eye. The time was 2:21 of the 10th and Eubank, in claiming the title he said he had dreamt of winning since he was aged 15, improved to 22-1(17). Blackwell, one of the toughest fighting men in British boxing, falls to 19-4-1(8). Blackwell was carried from the ring by a stretcher and he was given oxygen. We all hope he is okay.

British middleweight champion Nick ‘Bang Bang’ Blackwell has scoffed in the face of Chris Eubank Jr.’s claims he’s ‘bland’ and ‘boring’ and promised to take the fight to him when they meet on Saturday night (March 26) at The SSE Arena, Wembley.

“He can’t step up to my level, he’s a British level fighter. I’ve said it before and I’ll say it again, I don’t think he’ll ever win a world title.”

Chris Eubank Jr. believes British champion Nick Blackwell is merely keeping the throne warm and that on March 26 he will be relieved of his duties and a superior division ruler will be crowned.

Nick ‘Bang Bang’ Blackwell is two weeks away from defending his British middleweight title against Chris Eubank Jr. at The SSE Arena, Wembley and claims the hotly-anticipated grudge match is “better than a world title fight”.