SHOWTIME Sports will offer a live stream as Adrien Broner and Mikey Garcia go face-to-face for the first time at a New York City press conference on Monday to officially announce their blockbuster showdown on Saturday, July 29, live on SHOWTIME. The stream will be available for media and online outlets to embed via the SHO Sports YouTube channel.

Adrien Broner, seemingly every fight fans’s favourite bad boy, is a pretty heavy underdog going into his July fight with unbeaten Mikey Garcia; if not on the boards then perception-wise. Ask a fan, and around eight or nine out of ten of them will tell you Broner gets beaten on July 29.

Broner knows he’s not the fan favourite to win but he says he will be “100-percent” and that he wanted this, a tough fight. To his credit, Broner, a multi-weight champ, has never been stopped in his career, where he has suffered two defeats – to Marcos Maidana, who for many people “exposed” Broner and burst his bubble, and to Shawn Porter. But will Broner get stopped by Garcia next month? Is this the fight that ends Broner’s time as an elite fighter? 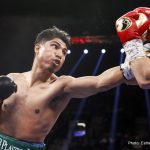 Two of the world’s best 140-pound boxers in the sport – Adrien Broner and Mikey Garcia – participated in a media conference call on Thursday to discuss the news that they would square off against one another on Saturday, July 29, on SHOWTIME CHAMPIONSHIP BOXING®. 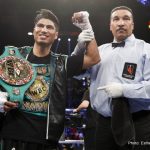 A mouth-watering catchweight fight between Adrien Broner and Mikey Garcia are said to be in the works for July 29 on Showtime Boxing in a fight at the Barclays Center in Brooklyn, New York, according to RingTV. Negotiations are going on between the two camps. It’s a great fight, especially Broner. He needs a big right now to revive his stalled career which appears to be heading downwards despite him being only 27. 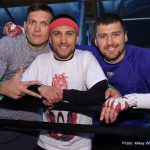 Who is the better fighter, once-beaten junior-lightweight ruler Vasyl Lomachenko, 7-1(5) or unbeaten lightweight champ Mikey Garcia, 36-0(30)? The two fighters themselves have had some heated verbal exchanges and now the two pound-for-pounders wish to settle it in the only place that matters, the ring, to find out who is superior.

Garcia, who looked sensational in returning to the ring to blitz Dejan Zlaticanin to claim the WBC 135 pound belt in January, told CBS Sports that Lomachenko is “only doing stuff that I did three, four years ago.” Garcia points to his own wins over Orlando Salido and Rocky Martinez, the two men who beat and got KO’d by Lomachenko respectively.

Due to the explosive and wholly impressive way he dealt with his last opponent, fight fans are eager to see Mikey Garcia’s next fight. In what is great news, the reigning WBC lightweight champ who crushed Dejan Zlaticanin to take the belt back in January is as eager to fight as his fans are to see him fight.

The unbeaten, now three-weight champ is aiming big for his next few fights and, in speaking with FightHype, Garcia called out recently crowned WBC/WBA welterweight champ Keith Thurman. Garcia said he would jump up to 147 for a fight with Thurman as soon as this coming July.

Thanks to his stunning return KO win over Dejan Zlaticanin, three-weight ruler Mikey Garcia is one of the hottest fighters on the scene today, and everyone wants to see what the unbeaten 29-year-old does next. Currently 36-0(30) and the WBC lightweight champ, Garcia has a ton of options.

One of these options is to fight in the UK, against one of the rival 135 pound champions from these shores. And Garcia, as he explained to Sky Sports, very much likes the idea of fighting a big fight in England.