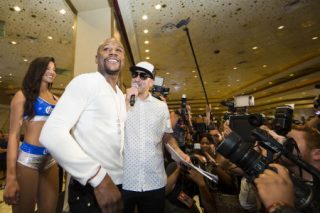 (Photo credit: Esther Lin/Showtime) As far as trainer Floyd Mayweather Sr is concerned there’s really no point in his son WBA/WBC welterweight champion Floyd Mayweather Jr (46-0, 26 KOs) fighting Marcos Maidana (35-4, 31 KOs) in a rematch this Saturday night because he thinks that Mayweather Jr already clearly beat Maidana last May, and he doesn’t see there being any reason for a rematch.

Floyd Sr. didn’t agree with the fight being scored as a 12 round majority decision obviously. He saw the fight as a definite victory for Mayweather.

Mayweather chose to fight Maidana again because he wanted to show the fans that he could beat him easier the second time around. Mayweather isn’t saying this but he really didn’t have any other interesting options in terms opponents to fight. Amir Khan was unavailable, Shawn Porter suffered a defeat, and Kell Brook and Keith Thurman don’t have big enough names for Mayweather to fight them. 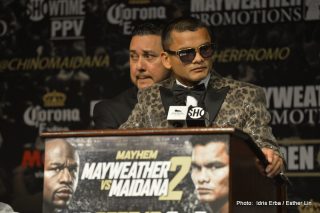 Marcos Maidana has called on pound-for-pound king Floyd Mayweather to ‘fight him like a man’.

The pair clash for the second successive time, live on BoxNation, this Saturday night from the MGM Grand in Las Vegas, with the rugged and rough Argentine calling on Mayweather to not run when they lock horns.

Maidana carries a fearsome reputation as one of boxing’s biggest hitters, with 31 knockouts in 35 wins, and has dismissed claims that his success in the first fight was as a result of the American superstar having slowed down, as he looks to goad Mayweather into a war. 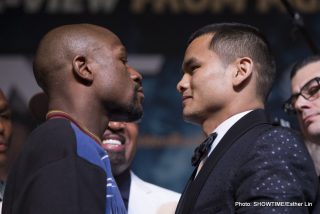 LAS VEGAS (Sept. 9, 2014) – With weeks of hard training behind them, we enter fight week for Floyd “Money” Mayweather and Marcos “El Chino” Maidana at MGM Grand in Las Vegas.

Take a look back at some of the best verbal sparring that has gone on between Mayweather, Maidana and their camps:

“My hand got raised so I don’t need to make any adjustments. He needs to make some major changes and probably get a new trainer if he wants to have a chance against me.”

Floyd Mayweather will not allow out-of-the ring distractions to take away his focus as he gears up for his highly-anticipated rematch with Argentine assassin Marcos Maidana.

The boxing superstar has faced a tumultuous few weeks ahead of this Saturday night’s clash, live on BoxNation, following a distasteful pop from rapper 50 Cent at his reading ability before it was announced he was being sued by his former partner Shantel Jackson.

Michigan born Mayweather, speaking on the attack from 50 Cent, says he is unfazed by the distractions which have come his way and has put them aside in the lead up to his mega-showdown with Maidana. 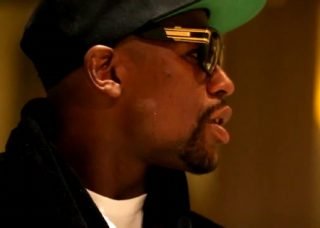 WBA/WBC welterweight champion Floyd Mayweather Jr (46-0, 26 KOs) plans on showing the boxing world the difference between an A-level fighter and a B-level fighter this Saturday night on September 13th in his rematch against #2 WBA, #3 WBC Marcos Maidana (35-4, 31 KOs) at the MGM Grand in Las Vegas, Nevada.

Mayweather points out that Maidana won only 3 rounds the last time he fought him last May and this was with Mayweather choosing to purposefully fight his type of fight by electing to punch with him with his back against the ropes instead of staying in the center of the ring like he normally does against his opponents.

Read moreMayweather: Maidana is a B level fighter 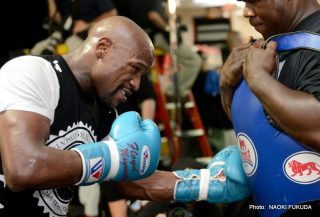 (Note: Countdown to Mayweather vs Maidana II is an EastSideBoxing exclusive by resident scribe Vivek “Vito” Wallace who will take provide a glimpse into the epic showdown each week on Sunday, with a final prediction/analysis piece to be published on the day of the fight).

In last weeks ‘Countdown to Mayweather vs Maidana II’, we took a look at Maidana’s fearless mission to unseat the best talent in the sport. As we get closer to this epic showdown, it would only be fitting to assess the opportunity for victory of the man across from him. Floyd Mayweather remains the most enigmatic force in the world of sports. Few unanswered questions in the present, no visible regrets of the past. Recent headlines surrounding him demonstrate nothing short of utter chaos, but if there’s ever been a place that serves as a sanctuary for the man they call ‘Money’, it can be found in the ring.

At age 37, facing the proverbial ‘west side’ of his career, Floyd Mayweather knows that the window of opportunity to secure his spot on the Mount Rushmore of boxing is quickly closing. Many legendary nights in the past helped him enter the discussion, but how well he finishes down the home stretch could very well tell the tale, as it relates to etching his name in that unprecedented stone.

Read moreCountdown to Mayweather vs Maidana II: Another Career Defining Moment for Mayweather?

Tickets for the closed circuit telecasts are priced at $75, not including handling fees. All seats are general admission and select venues are on sale now. Tickets can be purchased via Ticketmaster (800-745-3000), www.ticketmaster.com, MGM Resorts International Contact Center (866-740-7711), and all MGM Resorts International ticket offices. You must be 21 years of age or older to purchase tickets.

It has certainly been a while since we have heard Floyd Mayweather Jr. mention the blueprint to beat him, the one that every fighter facing him claims to have a hold of before realizing inside the ring, that they never did.

Everyone has a plan, until they don’t. So many various angles have been tried, too many strategies and approached to mention, yet nothing seemed to phase Mayweather Jr.

In his last fight against Marcos Maidana, Mayweather Jr., despite emerging a winner yet again, looked tired and certainly beat up; at least more than we are used to seeing. Many claimed that Maidana should have been given the victory nod that night, while some agree that despite the fight being extremely close, Floyd did deserve the win.