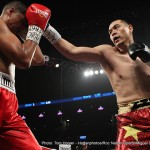 Frank Buglioni and Callum Johnson will clash for the British and Commonwealth Light-Heavyweight titles at the Principality Stadium in Cardiff on October 28, live on Sky Sports Box Office.

Buglioni puts his British title on the line for the second time, having seen off Ricky Summers at The O2 in his first defence in July.

Frank Buglioni wants the Lord Lonsdale belt for keeps before landing a showdown with WBA Light-Heavyweight king Nathan Cleverly as he defends his British title against Ricky Summers at The O2 in London on Saturday night, live on Sky Sports.

Buglioni closes the curtain on a great season of boxing on Sky Sports – and with the new season set to kick-off at The O2 in September, the 28 year old is setting his sights on putting the crown on the line here again and take another step to owning the belt outright.

Ricky Summers is ready to unleash his frustrations on Frank Buglioni and finally rip the British Light-Heavyweight title away from the champion when they clash at The O2 on Saturday night, live on Sky Sports.

The unbeaten Tipton man has been waiting in the wings for a crack at Buglioni since February when it was first announced that the pair would meet for the Wise Guy’s British strap.

Ricky Summers is looking to prove he’s a cut above Frank Buglioni after popping into the barber’s shop to get a trim for fight night.

Underdog Summers is a snip with most bookmakers to seize the British light heavyweight title on the big stage this Saturday evening, writes editor Craig Birch.

Frank Buglioni will defend his British Light-Heavyweight title against Ricky Summers at The O2 in London on Saturday July 1, live on Sky Sports.

Buglioni puts the belt on the line for the first time since winning it in stunning style against Hosea Burton in December, flooring the hometown favourite in the 11th round before stopping him in the final session.