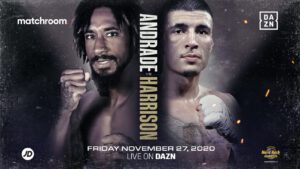 Demetrius Andrade appears to be done for the year after his scheduled November 27th opponent Dusty Hernandez-Harrison reportedly tested positive for COVID-19.

According to Chris Mannix, Hernandez-Harrison (34-0-1, 20 KOs) is sick, and he won’t be able to fight Andrade (29-0, 18 KOs) next weekend on November 27th in Hollywood, Florida.… read full article “Dusty Hernandez-Harrison sick with COVID-19, Demetrius Andrade fight off for Nov.27th”

Philadelphia, PA – Welterweights Thomas LaManna and Dusty Hernandez-Harrison will square off in a scheduled 10-round bout for the vacant USBA Welterweight title on Thursday, Sept. 15, in a highly anticipated showdown at the 2300 Arena. The card is promoted by Final Forum Boxing, Peltz Boxing Promotions & GH3 Promotions and will be broadcast live on CBS Sports Network.

“This is the kind of fight boxing needs at this juncture,” said Hall-of-Fame promoter and matchmaker J Russell Peltz. “We have two young prospects at the same level meeting in a logical location–New Jersey against Washington, D.C. in Philadelphia. Boxing needs more fights like this in this kind of setting. This is the best fight for each of these fighters at this point of their careers.” 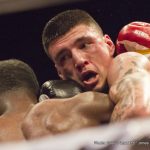 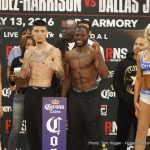 On the heels of returning home from serving as a sparring partner for Canelo Alvarez in San Diego, Dusty Hernandez-Harrison (29-0, 16 KOs) of Washington, D.C. hosted a community workout for a group of teens from the Greater Washington chapter of the Boys & Girls Club at the Bald Eagle Recreation Center in D.C.’s Bellevue neighborhood on May 3.

NEW YORK, NY (March 30, 2016) – Roc Nation Sports is pleased to announce that undefeated Dusty Hernandez-Harrison (29-0, 16 KOs) of Washington, D.C. will return to the ring on Friday, May 13 when he takes on Bakersfield, California’s Mike “The Silent Assassin” Dallas Jr. (21-3-1, 10 KOs) in a 10-round welterweight bout at the DC Armory in Washington, D.C. The fight will headline a throne boxing event that will be televised live on BET beginning at 10:00 p.m. ET/PT.