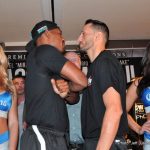 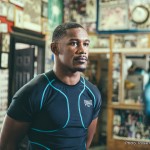 Shortly after the completion of the Canelo-Khan fight, Gilberto Mendoza, (president of the WBA) said he was waiting for his counterpart WBC Mauricio Sulaiman, to make the most expected fight between Saul Alvarez and his “mandatory” Gennady Golovkin.

Unfortunately, we all know what happened, the Mexican fighter gave up his middleweight title days after his famous post interview (after knocking out Amir Khan in 5 rounds) in where he challenged Triple G and went too far stating that it was time to stop “F around” and that he was ready to put his gloves on and get it on that same night. 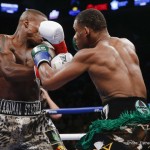 There are a number of talented fighters out there today, all calling themselves a world middleweight champion. In reality, Saul Alvarez is the real middleweight king, while unbeaten and avoided Gennady Golovkin is widely viewed as the best in the world at 160. But this doesn’t mean the other belt holders, Danny Jacobs and Billy Joe Saunders amongst them, cannot engage in interesting and potentially exciting fights.

And “regular” WBA middleweight ruler Danny Jacobs has made it clear he very much wants a unification fight with reigning WBO champ Saunders this summer, in his next fight. The two have exchanged words on Twitter, with Jacobs calling Saunders out and the British southpaw responding to Jacobs, stating how he will happily “kick you ass son.”

Daniel “Miracle Man” Jacobs (32-1-0 28KO) told Showtime’s Jim Grey it wasn’t a lucky punch that was responsible for his win over Peter “Kid Chocolate” Quillin (32-1-1 23KO) at Barclays Center, Brooklyn, NY, saturday night. He explained there are no “lucky punches” in boxing. Every punch thrown comes from hours of training, monotonous, repetitive training that instills the muscles with a memory of their own. The hope is those muscles will react in a certain way when the opportunity presents itself. There is no thought process, only reaction, and the punch is sent on its way. 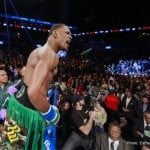 Saturday night at the Barclays Center in Brooklyn, New York, Daniel “Miracle Man” Jacobs (31-1-0, 28 KOs) steamrolled former undefeated WBO 160lb champion Peter “Kid Chocolate” Quillin (32-1-1, 23 KOs) with a thrilling first round knockout. The bout between the two Brooklyn natives was a major win for Jacobs, giving him significant reason to claim “top dog” status in the burgeoning discussion on who represents the class of the middleweight division. 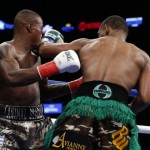 Brooklyn’s Jacobs (31-1, 28 KOs) won the “Battle For Brooklyn,” a matchup of top middleweights facing off in the prime of their career in their hometown. 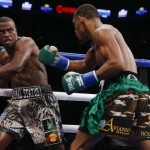 (Photo credit: Esther Lin/SHOWTIME) Former WBO 160lb champion Peter “Kid Chocolate” Quillin (32-1-1, 23 KOs) tasted defeat for the first time in his career on Saturday night in getting blasted out by the hard hitting WBA “regular” middleweight champion Daniel Jacobs (31-1, 28 KOs) in a 1st round TKO defeat in a fight between two Brooklyn natives at the Barclays Center in Brooklyn, New York.

Jacobs landed a crushing right hand to the head that clearly hurt Quillin, who reacted poorly by backing up to the ropes and attempting to fight back. Sending blood in the water, Jacobs went after the badly hurt Quillin and unloaded everything but the kitchen sink until referee Harvey Dock stepped in and stopped the fight at 1:25 of the round after Jacobs staggered Quillin with a big right to the head.