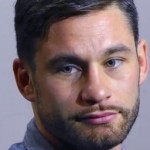 Unbeaten Chris Algieri (20-0, 8 KOs) is hoping to beat the old lion WBO welterweight champion Manny Pacquiao (56-5-2, 38 KOs) next month in their fight on November 22nd and take his place at the top of the boxing world. Pacquiao has showed signs of aging in his recent fights, and the taller and younger Algieri could be the guy to knock the soon to be 36-year-old Pacquiao of his throne.

Algieri would still need to beat Pacquiao in a likely rematch before he could move on to face guys like Floyd Mayweather Jr, Kell Brook, Amir Khan and Keith Thurman. Financially, a victory over Pacquiao will set Algieri up for life because it would enable him to get a bigger purse split in a rematch against Pacquiao.

Long Island native Chris Algieri recently took time out from his preparations for his fight against Manny Pacquiao to sit with MSG Network’s Fran Healy for “The Game 365”. The WBO Light Welterweight Champion discussed what his WBO belt means to him, beating the odds, his training and the big fight against the legendary Pacquiao set to take place on November 22 from Macao, China.

LAS VEGAS, NV (October 17, 2014) – Beginning October 19, undefeated light welterweight world champion Chris Algieri will begin training at The Palazzo for his upcoming fight against Fighter of the Decade and defending WBO welterweight champion Manny Pacquiao. Algieri will train in a custom gym at The Palazzo through November 13 and is giving boxing fans the ultimate opportunity – the chance to watch training sessions. 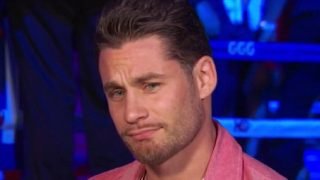 Undefeated light welterweight Chris Algieri (20-0, 8 KOs) says he knows had the talent to defeat WBO welterweight champion Manny Pacquiao (56-5-2, 38 KOs) for ages ever since he saw him fight Tim Bradley a couple of years ago. He saw the flaws in Pacquiao’s game even then, and obviously he hasn’t improved in the last two years since the first fight. Pacquiao has aged since the first fight with Bradley, and he’s now getting close to 36-years-old.

“I’m really in it and focused at the task at hand. I’m going out there to beat Manny Pacquiao and to beat a legend,” Algieri said via CBSSports.com. “That’s the only thing on my mind.” 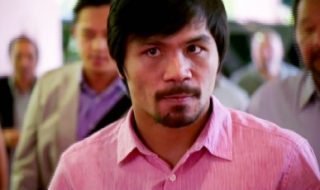 Martyniouk, one of four sparring partners that Pacquiao will be using to get ready for the 5’10” Algieri, thinks that Algieri will have a tough time with the speed and power of Pacquiao next month. Martyniouk says that he learned a lot from the sparring session with Pacquiao.

The November 22nd fight between WBO welterweight champion Manny Pacquiao and Chris Algieri, which will be televised by HBO pay-per-view, is getting only one thirty minute 24/7 series on HBO on November 8th at 1:00 a.m. (ET/PT) following the World Championship Boxing match-up between 49-year-old grizzled veteran Bernard Hopkins and the younger 31-year-old Sergey Kovalev.

This is a huge departure for Pacquiao for what his fights have previously received by HBO, and it begs the question whether this will be a new trend or a one-time thing with HBO. Granted, the Pacquiao-Algieri fight isn’t exciting many boxing fans, and it’s pretty clear already that Top Rank promoter Bob Arum made a mistake in selecting Algieri instead of someone a little more marketable and more charismatic. 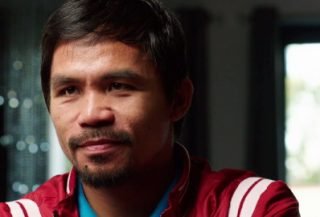 While Atlas likes Pacquiao’s skills and his power, he still sees him as having a lot of mileage on him from all the hard fights he’s had during his 19-year pro career. With Pacquiao having fought that long, Atlas sees Algieri as having a real chance of whipping Pacquiao and taking his WBO welterweight title in front of the entire boxing world on HBO pay-per-view.