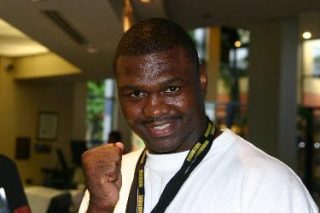 Perennial heavyweight contender Ray Austin returns to the ring tonight in Cleveland. The match — against Earl Ladson — is Austin’s first in two and a half years. “I’m getting back into the heavyweight business,” he says. “I’m taking on all comers…it don’t matter who they are. I’m not looking for media fights, that ain’t gonna do it. I want to fight guys in the squared circle. Tell the rest of the heavyweights that all they gotta do is sign their name on the dotted line. That will make me happy.”

The Cleveland, Ohio native, who has been fighting professionally since 1998, is now 42-years-old. For a professional boxer, obviously, this is an advanced age. But Austin is not daunted. “It feels like I’m 32, to be honest,” he states. The 6’6″, 246 lbs slugger reports that he has had no difficulty resuming training after his layoff.”Technically, I was never laid off,” he explains. “I have always trained two or three times a week, even when I was out of the ring for two years. Preparing to fight comes naturally to me. It’s like learned behavior. I’m used to doing certain things.”

(2/19/14) Trainers get a certain feeling when they work the mitts with boxers who possess natural power. South Florida’s Ricky Fisler realizes that sensation when he does glove-work with light-heavyweight Marcus de Oliveira. “It’s thrilling to work with a fighter who has that instinctive ability to distribute his weight when he punches,” says Fisler. “Marcus is can do that; he is gifted. His punches feel like sledgehammers.”

The Brazilian-born, Miami-based de Oliveira fights this Friday in Cleveland. The bout – against an opponent not yet identified – is likely to be the first of two tune-ups prior to seeking a match against a world-class foe. Fisler has high expectations of his fighter, and for good reasons, too. Currently 23-1-1 with 21 knockouts, de Oliveira carries one-punch KO power in both hands. 15 of his opponents have taken the full count. The Brazilian has a puncher’s chance against any top-rated fighter in his weight class.