After well over a decade, boxing returns to the historic Fabulous Forum in Inglewood, California. This afternoon Mexican legend Juan Manuel Marquez (55-7-1) and American Mike Alvarado (34-2-0) stepped onto the scales for their last formality before Saturday’s crossroads bout. This wasn’t your typical weigh in full of trash talk and posturing, but rather respect and compliments. There was a procedural and professional demeanor from the fighters, seemingly focused on the must win situation that lie ahead.

Bermane Stiverne stopped Chris Arreola at 2:02 of the sixth round Saturday night to become the first heavyweight titlist of Haitian heritage. ESPN picked up the anticipated rematch and aired it live on the main network rather than ESPN2, which is the home of their popular “Friday Night Fights” series. Here’s a look back at a great event.

It was a unique setting for a heavyweight world title bout, with the card taking place on the University of Southern California campus in Los Angeles. By contrast, the first Stiverne-Arreola match last April was held in front of a larger audience at the Citizens Business Bank Arena in Ontario, California. 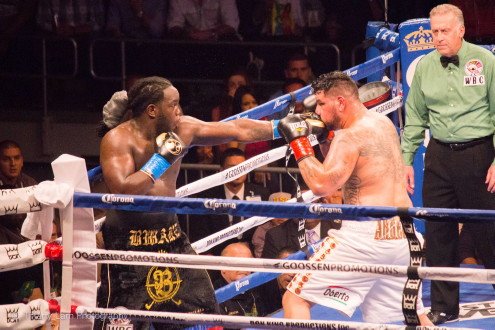 Weigh-ins for the WBC heavyweight title bout between Bermane Stiverne and Chris Arreola took place this afternoon at the Radisson Midtown near the USC campus in Los Angeles, where the action will take place tomorrow night. Both men came in lighter than they weighed for their first bout last April, showing just how serious the fighters are taking this rematch.

Arreola stepped onto the scale first, weighing in at 239, his trimmest physique in years. By comparison, “The Nightmare” came into the first match with Stiverne at 248, and tipped the scale for his most recent bout (a quick destruction of American Seth Mitchell last year) at 242 pounds.

Stiverne hit the scale next, measuring 239.5 pounds. By comparison, “B WARE” was 247 for the first fight with Arreola last April, and came in at 243 against journeyman Willie Herring in his only bout of 2012. Against former title challenger Ray Austin in June of 2011, Stiverne weighed in at 239 pounds. 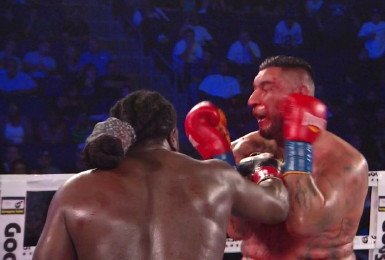