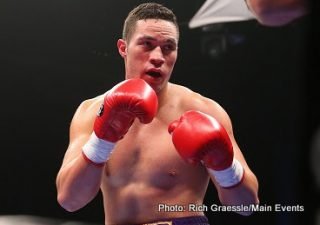 Saglam on his first visit to New Zealand has passed off some lofty proclamations, first been that he gave Wladimir Klitschko so much so heat in sparring sessions the champ couldn’t handle it. Going as far as to say he had the champ ‘scared’ and after only two days of what was meant to be a two week sparring assignment his services were dispensed with.

A good crowd has stepped out to see the hometown hero, and in this case it’s quite literally that. Parker is fighting 10 minutes away from where he grew up before shifting to Las Vegas to pursue his boxing career under the guidance of Kevin Barry.

An ensemble of sporting celebs and local fans are in attendance, including a guy that’s found fame for all the wrong reasons. Joseph Parker has given a front row seat ticket to a chap named Teina Pora. Pora did over two decades of jail time for a heinous crime he has being judiciously absolved of. A long time to serve for a crime you didn’t commit. Not boxing news but a nice touch by Parker and his team. Good stuff.

Read moreParker vs Pettaway Round by Round 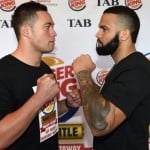 Pettaway 17-1-0 sports a handy resume, however on closer inspection only five of the opponents he’s faced to date have positive win-loss records.

In 2012 Pettaway took a big step up in fighting than undefeated Russian Magomed Abdusalamov. Early on Pettaway had moments, using his right hand to counter the aggressive southpaw. Unfortunately for Pettaway he didn’t have the power to win the respect of Abdusalamov, the Russian walking him down before stopping him by way of TKO in the 4th round.

Read moreParker To Continue To Rise Up The Heavyweight Ranks 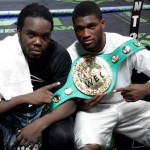 WBA (10) and WBO (11) ranked heavyweight Joseph Parker (12-0-0) is training for his next fight with American heavyweight Jason Pettaway (17-1-0). Parker takes time out of his training schedule to talk to us about his career to date, while also offering his thoughts on joining the Wladimir Klitschko camp later this year as a sparring partner for the man regarded as the best heavyweight on the planet.

Looking forward to getting back in the ring after a good year last year and fighting someone with a different style.

KEVIN BARRY TALKS ABOUT TRAINING WORLD CLASS HEAVYWEIGHT JOSEPH PARKER: Kevin Barry is training rising heavyweight prospect Joseph Parker (12-0-0) at a privately owned boxing gym in the suburbs of Las Vegas. I spent the morning with Barry at this facility discussing how Parker is tracking for his next fight with Jason Pettaway, and his future plans for the young heavyweight.

Q; Explain the set-up of this training facility?

This is a privately owned gym facility that I use to train Joseph and another heavyweight Izu Ugonoh .It’s great having a facility where it’s only Joe and I. He’s also living with me and has become every bit a part of my family.

Great crowd, the corporate seats at ringside are full with the Auckland bourgeoisie out to watch the latest edition of New Zealand’s heavyweight hopefuls in Joseph Parker.

Parker at 22 years of age and Williams twenty years his senior at 42 years of age has the youthful zeal and fitness firmly on his side.

Parker sporting a record 10 (KO 9) – 0 and Williams at 36 (19)-13-2 has his comparative trainer wheels on in terms of experience, however experience won’t be the defining factor in this fight.

Read moreJoseph Parker vs Sherman Williams round by round

Minto, 39 years of age, last bout was against another New Zealand heavy Shane Cameron. Minto did a number on Cameron in simply outhustling and muscling him in consistently beating him to the punch. Cameron unable to make it out for the eighth round.

Parker (8-0) appears on the fast track to contender status as Duco his promotional team flag the usual potpourri of patsies in matching Parker with a solid journeyman like Minto.