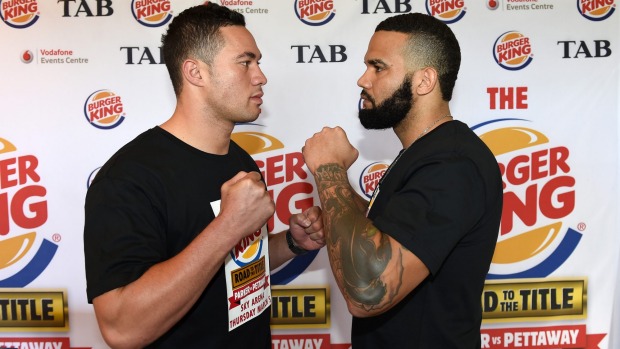 Pettaway 17-1-0 sports a handy resume, however on closer inspection only five of the opponents he’s faced to date have positive win-loss records.

In 2012 Pettaway took a big step up in fighting than undefeated Russian Magomed Abdusalamov. Early on Pettaway had moments, using his right hand to counter the aggressive southpaw. Unfortunately for Pettaway he didn’t have the power to win the respect of Abdusalamov, the Russian walking him down before stopping him by way of TKO in the 4th round.

Pettaway isn’t recognized by any of the four major sanctioning bodies – WBA, WBC, WBO, IBF – conversely Parker is ranked 10th in the WBA, and 9th in the WBO.

Pettaway today pronounced himself so confident of a win against Parker he was planning to bet $1000 on himself to win.

Parker at 1.92 cm is a smidgeon taller than the 190 cm Pettway, Pettaway at 34 years of age is 11 years older than his South Auckland raised opponent. Parker appears to possess the naturally bigger frame of the two men, and as per usual is in great shape.
Pettaway describes himself as ‘boxer, mover’, and this provides the opportunity for further development in Parkers all round skill set in learning how to deal with defensively minded fighters.

Parker as a boxer has outstanding base tools, a naturally powerful athlete with good hand- eye, a voracious work ethic and fast hands (perhaps some of the fastest in the heavyweight division). Parker’s trainer Kevin Barry is working hard with his fighter to frame both his character traits and physical tools into a complete boxing package.

Parker’s development under Barry’s tutelage was evidenced in his last fight against Irineu Beato Costa Junior. Parker displayed a growing shot selection and sharp accuracy in working Costa Juniors body with some hellacious shots before going upstairs. In the 4th round Parker stopped Costa Junior for the first time in the Brazilians career, knocking him out with a highlight reel right hand in serving up one of the most explosive stoppages of 2014.

Against Pettaway expect to see Parker cut off the ring to nullify Pettaway’s movement, using his jab to soften him up in finding the range for his right hand. When he starts catching Pettaway consistently that will be an ominous harbinger for the American.

Parker has far too much artillery at his disposal for Pettaway to be able to keep him off for sustained periods of time, and even the added incentive of betting $1000 on himself that would reap a healthy return that will not be enough to offset the size, power and speed advantage Parker will bring into the bout.

Expect a Parker stoppage before the 6th round, and for him to continue his development, and ascendancy to the upper echelons of the heavyweight division.