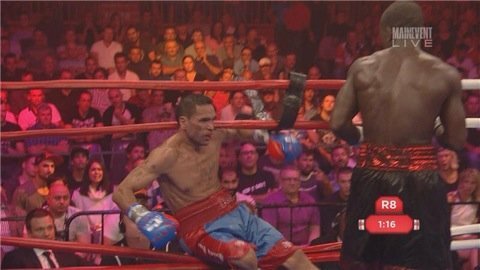 At stake was the WBA International Middleweight title.

Both fighters were in magnificent condition, Mundine at 38 years of age carried the advantage of being the physically bigger man, however from the outset Clottey the younger man by two years ignored that physical fact and fought as if he was.

Clottey started on the front foot, paying no dues to Mundines power or speed as he continually pressed forward throughout the first round, outpunching and most importantly out landing Mundine.

The template for round one was obviously his game plan – out-hustle – Mundine– as he started and finished the second round in exactly the same fashion.

Clottey was able to continually push himself inside the pocket in getting off good shots to the body and head of Mundine and Mundine couldn’t stop him.

Clottey fighting off the front foot at the clip he was in the opening two rounds was impressive. But could he maintain the industry and output given this was only his second bout in two years?

In the 3rd round Mundine was shook up by a left hook and later in the round he was dropped by a straight right.

Sitting Mundine down spurred Clottey on, he came out in the 4th round looking to end the night early, but Mundine had enough ticker and boxing wherewithal to hang tough and see the round out.

In the 5th round Mundine come out looking to forcibly buy some real estate, throwing out stinging jabs and overhand rights. Unfortunately for him Clotteys impermeable defence was working, the few punches that snuck through had negligible effect on the tough as teak Ghanaian.

As the fight wore on Mundine went to his bag of tricks in trying to fight from the outside, but the relentlessly bullish approach of Clottey kept closing the gap in nullifying Mundines attempt to keep the fight at a distance.

Clottey dropped him again mid-way through the 8th round, and by this point Mundine needed a KO to win, however he simply wasn’t able to hurt Clottey, and Clottey fought with the impunity that showed he knew it.

Everyone knew coming into the fight Clottey was tough, Mundine was now finding out how tough, the hard way.

Clottey dropped Mundine two more times in round 10 and it looked as if the end was nigh, but he showed great intestinal fortitude in getting off the canvass to see the fight out in an exemplary show of heart.

By fights end it was clearly evident that Clottey could maintain the early clip he had set himself and he ended the fight looking as if he could go another 12 rounds.

On this night Clottey was clearly the better man and this fight keeps skin in the game for him and his team as they look to get back into the upper echelons of the middleweight division.

For Mundine the bigger picture pugilistic aspirations he had to fight the likes of Canelo and Floyd Mayweather should be put to rest, at 38 years of age and taking a beat down of this kind from a come backing fighter he has no business sharing a canvass with two of the world’s elite fighters.