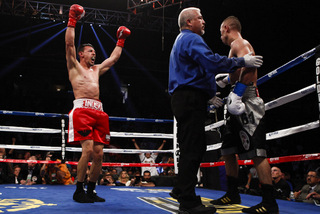 Guerrero, who was moving up two weight classes after a 15-month layoff, was the more active boxer despite admitting having to shake off some rust in his return to the ring. The Gilroy, Calif., native threw and landed more punches while showcasing a surprising display of power and aggressiveness in an impressive debut in his new division.

“He’s a strong guy,” Guerrero said. “I want to take on the best and that’s why we challenged him. It’s my first fight back in a year and I took care of business..

“I believe in my talents and my skills. I stood with him a little too long, but I’m a fighter. Now you know I can take a shot at the welterweight division. Floyd Mayweather, you want this belt, its right here. Come and get it. “

“I think I did wrong, not the judges,” Aydin said. “I could not do what I wanted to do. It’s my mistake, I blame it on me. After the fourth round something happened with me. I saw double and I don’t know why, but there’s no excuse – I lost.”

“It was fairly remarkable that Guerrero was able to move up two weight classes after a long layoff and win a battle of attrition with a true welterweight,” Bernstein said. “Aydin is not a stylist and has technique issues, but he is a powerful puncher and he made this an exciting fight.”

In a fast-paced, exciting fight, Shawn Porter kicked off the SHOWTIME CHAMPIONSHIP BOXING telecast with a hard-fought unanimous decision (96-94, 97-93, 98-92) victory over Alfonso Gomez in the 10-round welterweight co-feature.

The ShoBox: The New Generation alum proved too tough and durable for Gomez, who seemed unable to hurt Porter (20-0, 14 KO’s), of Cleveland, Ohio, with his best shots. Porter, who landed 45 percent of his power punches compared to Gomez’s 34 percent, dominated the middle rounds with effective body shots and powerful combos as Gomez (23-6-2, 12 KO’s), of Guadalajara, Mexico, tired.

“He has a lot of heart,” Porter said. “We came in here and we knew what to expect. I’m an aggressive fighter, my team knows that. If there’s anything I can change it’s that I come forward too much.

Undefeated British super middleweight prospect George Groves (15-0, 12 KO’s) opened up the SHOWTIME EXTREME telecast with a bang with a brutal knockout at 2:15 of the sixth round over Francisco Sierra (24-6-1, 22 KO’s), of Tepic, Mexico.