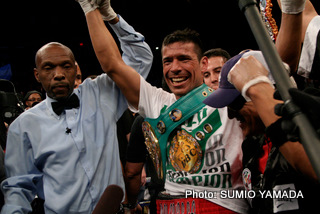 Christian R. (Orlando, FL): Shane Mosley has reported that he’s close to a fight with Pacquiao, but Berto and Martinez remain in play, as well as potentially Mayweather and Marquez. Who do you see getting in the ring with Manny Pacquiao next?

Vivek W. (ESB): Despite the admission from Mosley that he and Arum are “very close” in Pacquiao negotiations, we’ve yet to get an official confirmation from either Top Rank or Team Pacquiao on this statement. Remember earlier this year when Arum posted the countdown clock on his companies website with a deadline for Mayweather; only for fight fans to later find out it was designed to put pressure on the other party to get them to fully commit? Well, same rules apply here. Truth is, I don’t think we’re any closer to seeing Mosley face Pacquiao than we were in the past. After seeing Mosley in his last two fights, no question, the time is right for Pacquiao to get Mosley in the ring, but I doubt it happens and here’s why:

Those die-hard Pacquiao radicals out there who run from website to website stalking fans who show a little love for Mayweather have completely killed options like Mosley and Marquez, because they belittle past Mayweather opponents so badly that it takes away from Pacquiao victories over these same men! Think about the way some have discredited recent victories of Mayweather, saying Hatton wasn’t that good, Oscar and Marquez were old, and Mosley was older; only to later become irate with fans who don’t see much to celebrate in Pacquiao beating men whom they openly called “shells” of their former selves.. Time and time again we see that it ultimately impacts the perception surrounding Pacquiao’s victories over certain men.

When you look at current possibilities, they said Mayweather defeated Marquez out of his element at 145/146lbs; yet Team Pacquiao has said they will “NOT” be going below 147lbs again. So, other than criticism, what could truthfully come from Pacquiao defeating Marquez in a trilogy above a weight they have already deemed him to be ineffective at? Same thing for Mosley. They stripped Mayweather’s praise, saying Mosley was too old and fighting without his “juice” for the first time. Again, other than criticism, what can be granted if Pacquiao defeats him? That’s why it pays to stop talking and give praise where it’s due to BOTH MEN! Now, Pacquiao has no choice but to target a Berto or Martinez, because his very own radicals have tainted the other options available.

Regarding Mayweather, there was pressure to get that fight done when Arum thought Pacquiao was going to retire in favor of politics. Pacquiao has made it clear he will be here another 2-3 years, at least. Now, that pressure to face Mayweather or deal with a blood based test issue is removed, and I see them milking this (cash) cow ’til the cow comes home! Literally! You can expect to see Pacquiao/Berto next in some “Help for Homeland” type battle with a small level of proceeds and a large level of attention going to two well deserving nations…..how sweet? (no pun intended). Berto also allows them to fill the “African-American fighter” quota imposed by Hopkins, (LOL), while side-stepping a man that may present a greater danger in Martinez. Some would argue that Berto has never faced world-class talent. Well, Pacquiao literally takes him from the frying pan and into the fire…….but get ready……it’s goin’ down!

Brad H. (Tampa, FL): Seeing a much bigger Paul Williams get knocked out with one big shot made me reconsider my views on Pacquiao. Anything can happen on any given night, but he has become invincible against these bigger men/punchers! I never believed the steroids thing and don’t want to now, but I really have questions. I just don’t believe a much smaller man can develop toughness like we have seen at this stage in his career. Is this pretty much the reason for your suspicion, too?

Vivek W. (ESB): Brad, that’s the million dollar question, my man! I’ve had to look at life deeply, and realize that in the most wicked criminal on the face of the planet, there’s something positive; and within the heart of the most humble man, there is also room for deceit. No one is all of either! This has been the most troubling issue I’ve dealt with as a writer in the sport. Bar none! My son has a room full of Pacquiao and Mayweather posters, shirts, etc. At 5 years old, these are literally the first athletes he has EVER truly identified with and emulated. I was raised on principles and I raise him and my daughter with those same principles. How do I reconcile one hero refusing something I’ve taught him that every athlete should openly welcome, and the other being completely up for it? See how sensitive this issue is for me? It literally hits home!

Where my questions started was the fact that Pacquiao tipped the scales at the same mid to high 140’s since ’06 (as records show) yet was rocked far easier, and never did nearly as much physical harm to opponents who were lighter, smaller men. Fast forward a few years, and not only has his punch volume gone up compared to earlier in his career according to compubox stats, (which historically has gone down for men moving up in weight), but also, there’s been a difference in his threshold for pain. I don’t know what to say, other than the fact that I never questioned his talent one single time over the years until he declined blood based testing, despite his opponent being subjected to the same test. For me, that took things into a totally different direction. People say that Mayweather asked for the test to get him to decline. How do you know in advance that an athlete in a combat sport will refuse a blood based drug test, (of all things)? I can’t recall that EVER happening in any sport!

Others say “why only Pacquiao”? Well, because the man he’s destined to face is the only other man in the sport with enough status to demand such a thing. Welcome to the big league! You’re no longer the only one on your level! Mayweather walked away from a $40M+ payday when ODH refused to give him the upper-hand in negotiations for a rematch after Floyd had already defeated him. That said something to me about his value of certain principles, because you wouldn’t expect a man who calls himself “money” to walk away from a purse that big over glove sizes, or a ring size, and things like that! But he did! None of Pacquiao’s other opponents would have made the decision to leave this type of money on the table, and none of them have the status to demand such a test! If men and women around the world who run or swim can agree to this very testing the day of the event and still break world records, it just baffles me how an athlete I admire can say no!

I advise anyone who says he is guilty to stop, because we don’t know. But I would also advise anyone saying he isn’t guilty to stop, because again, WE DON’T KNOW! What I do know is that you’re right, Brad, some signs do point to something super-natural. It comes down to two things. If Pacquiao has in fact lost some of his greatness with age like everyone else, does this mean that 90% of him is suddenly this much better than everyone else? Or has he, closing in on 33 years of age with 50+ fights, somehow found a way to turn back the clock and stop his aging, which is precisely what these substances are designed to do? Neither scenario is comforting. Victor Conte is the master creator of these substances. He specifically said “2 months full random blood testing, and NO MORE THAN 5 DAYS BEFORE THE EVENT AS AN EFFECTIVE CUT-OFF”. Until Pacquiao goes from 7 days to 5 or less, I can only question his reasons for not taking the test! WE SIMPLY DON’T KNOW!

Aaron D. (Covina, CA): What would you do next if you were Paul Williams?

Vivek W. (ESB): I think this could be a solid learning experience for Williams. Just like Hatton and Khan, it’s an example of a good fighter getting caught flush with something hot and heavy quicker than they were warmed up enough to handle it! Williams has taken that same shot from Martinez a hundred times, yet in the past fight he allowed himself room to work up to that level. In this fight, he started out very aggressive and immediately put himself in the line of fire. The way he responds will be paramount going forward. Ricky Hatton basically spiraled out of control after the first KO loss and was never the same, softening him up for the second loss. Then you have someone like Amir Khan who was KO’d early, got back on his horse, and rode it to greener pastures!

It’s all in the heart of a fighter, and greatness requires the heart of a champion. Every setback comes with a chance to do something much greater in the future. For starters, I think Williams needs to polish up some of his fundamentals. Every fighter likes a war, but not everyone should try to be in one. Defense would be a valued commodity for him. He should make an effort to learn more to add to his offensive arsenal. In a short time, Williams has faced Winky Wright, Cintron, Martinez (twice), and Margarito. I don’t think anyone can question his heart. As a matter of fact, if Martinez doesn’t land Pacquiao, I wouldn’t rule out a trilogy. If Roy Jones and Tarver did it after a close bout and a quick KO, I don’t see why these two men can’t! He’ll be back! And I plan to support him like any other boxer when he returns!

Next post: Katsidis vs Marquez; Berto vs Hernandez This Saturday