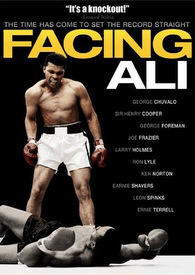 by James Slater – While some fans may well groan when they read how yet another DVD, movie, documentary or book on Muhammad Ali has been released, the new DVD “Facing Ali” that was released this week is well worth watching. As with the books Facing Ali and Facing Tyson, the film, directed by Pete McCormack, gives the guy on the other side of the ring to the legend a chance to speak. In this case, ten men who shared the ring with Ali at least one time get to tell their story.

Sir Henry Cooper, Ernie Terrell, George Chuvalo, Joe Frazier, Ken Norton George Foreman, Ron Lyle, Earnie Shavers, Leon Spinks and Larry Holmes are the ten fighters that make up the list (no Joe Bugner or Chick Wepner sadly) and each fighter who is a legend in his own right has plenty of time devoted to him.

Over the course of the ninety-plus minutes, thirteen key fights in Ali’s career are given attention – from his first fight with Cooper right up to Ali’s sad fight with Holmes. In addition, all ten fighters talk about their early days, their start in the sport and their eventual meeting or meetings with the great man. Compelling viewing throughout, the sections with Chuvalo, Lyle and Spinks were particularly interesting to me..

One thing that is first noted upon watching the DVD is the fact that four of the ten greats have subtitles added to their words so as to make them fully intelligible – a sign of how some of the guys came out of boxing slightly more worse for wear than their fellow warriors. Frazier, Norton, Shavers and Spinks get the subtitle treatment, and in the case of “Neon Leon” they are badly needed. Indeed, when one listens to how sharply and clearly the remainder of the ten speak, it’s tough not to feel some pity for Spinks. Norton’s poor speech is largely due to the well publicised car crash he suffered in 1986, although Kenny’s speech has deteriorated alarmingly quite recently.

Despite any problems the ten guys have had since retiring, however, all are upbeat and full of praise for Ali. There is some suggestion of criticism of Ali at times, most notable by the still angry “Smokin'” Joe, but otherwise all ten boxers give Ali huge respect at all times. And even Frazier himself, when speaking about Ali’s current physical condition, is almost moved to tears.

Spinks, who famously met and defeated Ali in 1978, is without doubt the wildest and funniest guy of the ten, and his recollections of how seemingly every fighter in the world copied Ali in the ’60s and also turned to the Muslim religion and changed their name is especially funny. “My name’s Leon,” Spinks says, “and there’s nothing white about that!”

Chuvalo, arguably the best preserved of the ten, despite being in his early 70s, is an amazing man to listen to, even though the story he tells of how his sons fell deeply into drugs and what they became is truly disturbing (George lost his sons to drugs, and tragically, his wife later committed suicide). Also fascinating, and also quite frightening, is the story the former Canadian champ tells on the fate of Terrell’s manager, Bernie Glickman.

Throughout the film, footage is shown of Ali both in and out of the ring, as is footage, much of it unseen until now, of his ten co-stars. It’s most interesting to hear the men who faced Ali giving their opinions on things such as Ali’s conversion to the Muslim faith and his name change, Ali’s current condition and whether or not boxing is solely to blame and their opinions on his refusal to go to Vietnam. Not all the guys agree with one another when speaking on these subjects.

The final segment of the film, when Ali’s final title fight and his subsequent ill health is touched on, is hard going, but a number of the guys have a tale to tell of when they last saw Ali in person and this is a nice moment in the film. Chuvalo says he never actually thought Ali would have health problems later in life, while former sparring partner Holmes talks of how he saw the damage that was being done to Ali’s body firsthand – a sight that moved him to not even want to hit Ali to the body in their 1980 bout.

The final word is uttered by Lyle (also a sparring partner of Ali’s), and he says that although Ali cannot speak for himself today, “we can all speak for him.” Just prior to this final piece of dialogue, Foreman says that when he looks at Ali today he sees “a hero.”

So will you when you watch Facing Ali. In fact, you’ll see eleven heroes of the ring!