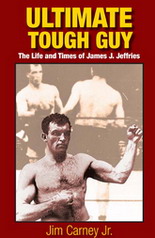 By ADEYINKA MAKINDE – Almost a hundred years have passed since ‘The Fight of the Century’, namely that world heavyweight title bout staged in Reno, Nevada between the defending champion, Jack Johnson and the unretired and undefeated former champion, James J. Jeffries. Only two other fights have carried a similar level of significance. Joe Louis’ return confrontation with the German Max Schemeling on the eve of World War Two and the 1971 clash between Muhammad Ali and Joe Frazier, each man an undefeated claimant for the heavyweight championship. If Ali-Frazier partly symbolized the clash between the forces of conservatism and youthful radicalism, and Louis-Schmeling that of opposing ideological camps on the threshold of a world war, the encounter between Johnson-Jeffries was perceived and promoted as a clash between black and white and nothing short of a battle for racial hegemony.

After six years out of the sport, paunchy and corroded; Jefferies had been roused out of an almost idyllic retirement by a call first sounded little more than hours after Johnson’s humiliation of Tommy Burns in Sydney, Australia on Boxing Day in 1908: “Leave your Alfalfa farm and save the honour of the white race.” It was a burden Jeffries resented and one which he could not discharge. Bloodied and exhausted after been on the receiving end of a largely one-sided mauling by Johnson, the former champion was stopped in the 15th round..

It is this image; captured on film and numerous photographs, that of the battered and vanquished fighter, the almost pitiable and forlorn countenance of what author Jim Carney refers to as ‘The Failed Redeemer’, which arguably predominates in the first instance recollection by many a fan of the man who was the fourth holder of the world heavyweight title under Marquis of Queensberry Rules. It is Carney’s contention that Jeffries has been hard-done by history. That the only footage most fight fans would be familiar with are the slow and ponderous movements of an aged fighter being effortlessly put to the sword by a seemingly cavalier Johnson, is to him a grievous injustice to the legacy of a man who was dominant during his reign. Compounding this is the alleged portrayal over the past four decades of Jeffries’ as a ‘racist’.

Jeffries fought during the period when boxing had largely overcome many of the legal restrictions which threatened its existence, although formidable opposition continued to call for its wholesale proscription. It was the progressive era; an era when many Christian leaders called for greater moral decorum. A time of evangelism and influential preachers who bashed the lecterns on their pulpits to rail against the vices attendant to a rapidly modernising society. Espousing an essentially Victorian moralist stance, their weltanshauung declared the consumption of alcohol to be intolerable and out-of-wedlock couplings to be objectionable. They decried a multitude of other evils chief among which was a belief that boxing –in their view a cesspool of shysters, chancers and con artists- was a brutal and dehumanising sport which was the preserve of the ‘lower tiers’ of the white race and which by virtue of the potential of a knockout, threatened to give the veneer of equality even dominance to those perceived to be at the ‘lowest level.’ Interestingly, Jeffries and Johnson would themselves be casualties of the age –Johnson of course falling foul of the Mann Act which banned the transportation of women across state lines for ‘immoral’ purposes, and Jeffries suffering financial loss when forced to close an establishment following the implementation of the Volstead Act which inaugurated the period of Prohibition.

It was a fascinating period in boxing history, and the author includes extensive pen portraits of a range of interesting characters linked to Jeffries as opponents, promoters and acquaintances among them the egotistical, irascible but sublimely skilled James J. Corbett, the unpredictably eccentric antipodean Bob Fitzsimmons, the cauliflower-eared and barely literate ex-seaman Tom Sharkey, the shrewd impresario Bill Brady as well as the promoting genius Tex Rickard. It was a time of course when boxing was a sport heavily populated by practitioners and promoters of Irish lineage although Jeffries, himself largely of Scotch-Dutch stock, is said to be a descendant of George Jeffreys, the infamous ‘Hanging Judge’ who during the reign of King James II condemned a sizeable number of the participants of the failed Monmouth Rebellion at assizes held mainly in Taunton Castle.

In many ways the digested history of Jeffries as laid down in many boxing compendiums characterises an uncomplicated man who is what is described in simple terms as a ‘regular’ guy. He did not involve himself in the sort of scandals which his fellow pugilists were apt to be mired, he hunted and shot game, played cards and enjoyed an easy camaraderie with his camp mates. Ultimate Tough Guy provides a deeper portrait of his personality. From a close knit large family background, Jeffries is seen to be a complex –though not overly complex man who was earnest but who could be quite surly, a boaster (though not quite in the league of Corbett) who was essentially of a shy disposition, a fighter who was alternately vengeful and compassionate with his foes and a man who while being mistrustful of the press was prone to be overly trusting of ‘friends’.

This book is quite evidently a labour of love. It would appear to be the fruition of a 50-year-old love affair with the sport and attempts to pack in a considerable amount of material –seemingly too much at times. Lengthy synopsis of the life and careers of most of his opponents are given, but such treatment is also given to some who he never faced including Charley Mitchell and Sam Langford. Such is the author’s attention to detail that many biographic passages culminate with a reference of the figure’s entry into The Ring’s Hall of Fame and the International Boxing Hall of Fame, although rather surprisingly, an index of a record of Jeffries’ bouts is not presented.

Nevertheless, such pedantic approach is a logical path to take for one who is bent on giving credit to those neglected figures of the sport. It is the justified method when dealing with frequently contradictory or incomplete accounts of bouts and the verbal utterances of characters when attempting to ascertain the ‘truth’ and fathoming their motives and intentions. The meticulous recapitulating of the blows exchanged and the tactics employed in the ring during his fights will certainly be applauded by the aficionado who tends to feel cheated by the brevity of the manner in which bouts are covered by many ‘mainstream’ authors when they write about the lives of boxers.

While Carney is clear in his motive of proving Jeffries to be perhaps the greatest heavyweight of all and to acquit him of the charge of racism, he is consistent in maintaining an even-handedness in his selection of information. He does not neglect to criticise Jeffries for his shortcomings as a person.

If at times his thoroughness verges on laundry listing camouflaged as prose, much of this is largely off-set by his clarity of expression, and most importantly, by his rendition of a part of the history of a sport which then as now has always been rich in characters, both combatant and non-combatant, many of whom display the human capacity for courage, discipline, audacity, skulduggery and duplicity.

Should James J. Jeffries be considered among the greatest of all heavyweight champions? The author provides some compelling arguments and rationales as to why he feels the fighter should be judged as such. This relates to his size and inherent athleticism, his ability to absorb punishment and capacity to fashion ‘come-from-behind’ victories, as well as the quality of his opposition, which he favourably compares to the Ali-Foreman-Frazier era.

It is of course a never ending and impossible to resolve debate. But for those fans whose only image of him is that of the haggard and broken down fighter overwhelmed by Jack Johnson on the fourth of July in 1910, this book may provide the impetus to reassess their views.

Ultimate Tough Guy: The Life and Times of James J. Jeffries by Jim Carney Jr. is published by Achill Publishing. Available at www.jimjeffriesboxing.com and through amazon.com

Adeyinka Makinde, the author of Dick Tiger: The Life & Times of a Boxing Immortal, is completing Jersey Boy: The Life & Mob Slaying of Frankie DePaula