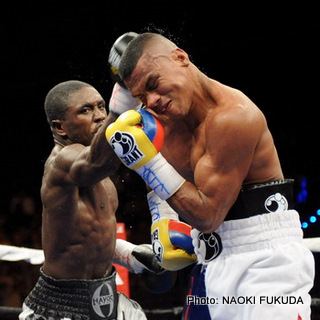 by Alden Chodash – Current WBC Welterweight Champion Andre Berto retained his title by outboxing his dangerous challenger, Juan Urango over the course of twelve rounds and walked off with a unanimous decision victory. After a few interesting exchanges between the two in the early rounds, Berto felt content with keeping the hard hitting Urango at long range thus avoiding the risk of such a renowned puncher. Berto scored frequently with his money punch, the right uppercut and kept Urango turning and unable to get off. Scores were 117-111, and 118-110 (Twice).

Former WBO Welterweight Champion, Kermit Cintron ressurected his career with a scintilating, hard fought unanimous decision victory against previously unbeaten, Alfredo “El Perro” Angulo. After a slow start to the highly-anticipated Junior-Middleweight title eliminator over the first two rounds, Cintron got on track starting in round three with crisp combinations that Angulo had no defense for whatsoever. Angulo started to respond in round five by closing the gap on Cintron and landing effective punches out of his natural orthodox stance as well as his southpaw stance. Just when it seemed that Cintron would fold under Angulo’s steady pressure, the former champion kicked it into another gear in the late rounds before surviving one last charge from Angulo in the twelfth. However, it was too late for “El Perro” to shift the fight in his momentum and Cintron walked off with a unanimous decision victor y. Scores were 116-112 across the board..

2008 Olympian Jonathan Gonzalez stayed undefeated with an impressive 1st round stoppage of Laquel Fleming. Gonzalez ended the fight midway through the first round with a resounding barrage of punches before the referee waved off the contest.

“The Mack Attack” Yusaf Mack, New York, NY, looked impressive in his stoppage win against DeAndrey Abron, Youngston, Ohio. Mack opened up on Abron in round four, putting him down with a series of punches and ended the affair later that round with a huge left hook which prompted trainer, Jack Loew to save his charge.