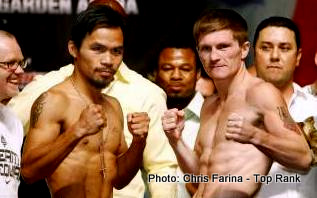 By John Wight – The weigh-in at the MGM Grand in Las Vegas has just taken place. The immediate thing to be said is that both fighters look in optimum shape, with Pacquiao weighing in at 138lbs and Hatton bang-on at 140. As to all the talk leading up to the fight about Hatton being significantly the bigger of the two men, I didn’t see much of a difference in height, though certainly Hatton has the larger frame of the two, which means he’ll undoubtedly come in heavier than Pacquiao on the night. Given that Pacman is moving up to a weight he’s never fought at before, I can’t see him putting on more than a few pounds between now and Saturday night, which will give Hatton both a physical and psychological edge going in with regard to strength.

Hatton looked impressive at the weigh-in. Unlike his fight against Mayweather Jnr, he looked calm, composed and steely determined.. Recalling the weigh in back then, he was over-hyped and far too interested in engaging with his legion of fans and their endless rendition of a song that has grown so insuffferable, it’s as hard on the ear as a pneumatic drill. Not this time though; this time he appeared all business, and with the added benefit of the knowledge and know-how of Mayweather Snr in his corner, no one should be in any doubt that he can win this fight.

The one chance he has is if he can make Manny miss and counterpunch in the first few rounds to slow him down, before going on the offensive and letting rip to the body. For this to succeed his handspeed and timing will need to be better than it’s ever been or ever will be, as in his opponent you have one of the fastest fighters in the history of the sport.

And speaking of Manny Pacquiao, what can be said that hasn’t already about this phenomenon of the sport of boxing, not only a superlative athlete but also a man of profound dignity, humility and fidelity to his people? The product of the kind of poverty that most of us couldn’t even begin to imagine, hailing from a nation that has known little else, its people viewed in the United States and elsewhere in the West as good for little else than doing the shitty jobs for shitty wages which their Western counterparts in their arrogance wouldn’t be seen dead doing, nothing will be more fitting than watching a who’s who of obscenely rich, primped and preened celebrities watching this warrior with the weight of a nation on his shoulders going into battle. For make no mistake, Manny Pacquiao fights for a cause much greater than himself.

He fights for the little guy everywhere, for the valets and the cleaners, the busboys, the people who live on the crumbs from the table of the rich, invisible to all except one another.

Tomorrow night is their night more than anybody’s. Tomorrow night, as Manny makes his entrance to the ring to the deserved acclaim of the fans, they’ll be right there with him, walking every step, chests bursting with pride as for this one night they escape the truncated lives and dim horizons brought to them courtesy of a future of servitude.

More than just a fight, this will be an affirmation of the human spirit at its most proud and unshakeable, transcending the atomisation, materialism, and deadening routine of an age in which the weak preside over the strong, the shifty over the proud, and the heartless over the compassionate man.

It is why a year from now people will still be talking about the fight in which boxing rediscovered its soul.

Weigh-In results from the MGM Grand in Las Vegas: