Joe Calzaghe: One, Two or Three? 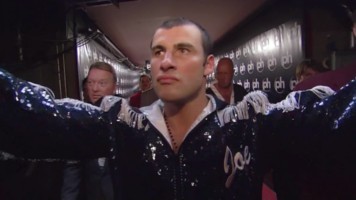 By Michael Klimes: The realities of boxing and politics seem dimensions a part but there are instances when these realities overlap. Both pit individuals against each another in colossal struggles, demand vast sums of money to make things happen, consume their participants, inflict irreversible damage and usually elevate the art of trash talking up or down a notch.

Generally, it must be said that politicians win the fight against boxers when it comes to their debating skills as they grasp the nuances of language far better than most athletes do. If a politician is an aristocratic wordsmith, than a boxer usually has more of a working class vernacular although there are exceptions such as Chris Eubank. Even his eloquence, however, has always been of the lisp variety.

It seems Joe Calzaghe is the John McCain of the boxing world in the sense that out of the three best fighters on the planet, the other two being Floyd Mayweather Junior and Manny Pacquiao; he is oldest and the most seasoned operator. Calzaghe is a thirty six year old pugilist but a sprightly one who is looking to conclude his career at the end of this year. His desire to finish sooner rather than later is admirable, but the question remains, when should he cut the gloves? The answer very much depends on how much longer he can sustain his athletic prowess. The same is true of John McCain if he wins the White House. His presidency will only be secure as long as his health remains intact.

There is a side of the argument which wants to see Calzaghe have one last hurrah and then forget he was ever a boxer. How much easier would life be for boxing fans if they did not have to see their heroes take prolonged beatings and sustain permanent brain damage? Nevertheless, there is another side to the argument that acknowledges the massive presence of Joe Calzaghe in British boxing. His stature has only grown. At the end of last year, the British press were reacquainting the public with a lost stranger that was the obscure figure of boxing.

The British people were learning about the significant fact that our former empire had a plethora of world champions including Joe Calzaghe, Ricky Hatton, Gavin Rees, Clinton Woods, David Haye, Enzo Maccarinelli and Junior Witter. Sadly, the previous six months have seen many of those names be defeated. Maccaranelli, Rees, Hatton, Witter and Woods have been made into mortals.

Fortunately, some such as David Haye have experienced their market value rise tremendously but others seem an endangered species. Hatton has not been particularly eye catching since 2005, Rees was never world class, Maccaranelli was partially unlucky and outgunned while Woods was accumulated too much mileage. Haye and Amir Khan seem to be the immediate heirs that will have to inherit, whether they like it or not, Calzaghe’s hefty mantle.

This brings us back to the question of retirement because when the Welshman sees the dusk there will be a gaping black hole in British boxing. He only broke into mainstream’s consciousness in 2006 with the schooling of Lacy and perhaps, if one is being pessimistic, he only received the proper respect he was due to him at the end of 2007 when he was named as the BBC Sport’s Personality of the Year. He will probably fight Roy Jones Junior next, a spectacle that has come too late but what if Calzaghe stays for one more year? There are two lucrative match ups one can envisage after Jones. It does not matter what order they come in but clashes with Glen Johnson and Kelly Pavlik would be tantalising. They would be stern challenges, bring dollar bills and be meaningful victories for Calzaghe’s legacy but will time allow him the grace of one extra year as an elite force?

For certain detractors, Calzaghe still has not done enough to consider his legacy unassailable. There is an element of truth in their thinking although much criticism of Calzaghe is schizophrenic. He has always followed a spectacular victory with disappointment. After Jeff Lacy, there was Peter Manfredo, after Mikkel Kessler there was Bernard Hopkins and after Chris Eubank there was a lot of mediocrity. If he could clinch two excellent back to back performances, they would be the sword in the stone which nobody could pullout. Afterward, I could then attempt to write a just tribute that is due to a gentleman of the sport and the most accomplished European fighter of the post-war period.

Comments can be emailed to challenger185@hotmail.com

Next post: Ronald Hearns Takes A Step Up In Class On June 20th Card In Cayman Islands