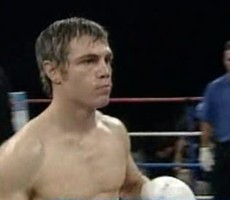 Katsidis, 26, a Sydney Olympian, two division Australian champion who has the makings to be another Arturo Gatti, won the title in February stopping Britain’s Graham Earl after five hellacious rounds. With Amonsot being a southpaw action fighter, and Katsidis not one to take a backward step, do not be surprised if this fight ends up stealing the show.

Strong as an ox Katsidis, who got nick his name from former WBC 154 pound champion Rocky Mattiolli and not the cinema Rocky, is always one punch away from victory or defeat, but he does have some good boxing skill and can grab cute angles where he gets full power into his shots while not being able to get nailed clean. He has been wobbled, and got dropped by Earl, not a “puncher” by a shot Earl threw out of desperation while being blitzed along the ropes. If that type of blow can drop him, it has many wondering what will happen if he gets caught by a guy with real power.

Amonsot has been stopped twice, by useful, but not world class Simson Butar Butar, the last, two fights back in 47 seconds. That was a super featherweight bout and he may have been spent as he failed to make weight and thus moved up to the 135 pound limit winning the WBO Asia Pacific belt, once owned by Katsidis, outpointing the 8-1 Da Woon Choo, in Korea in February. Last year he defeated the handy Jose Reyes (then 18-2) on points over ten heats in Vegas and he also has a draw with Joey Di Ricardo, beaten in Australia by Lovemore Ndou (KO by 1) and Ranee Ganoy (L12). (Ganoy was stopped by Katsidis in five back in ’05). The Di Ricardo fight was in Indonesia so it’s safe to say Czar should have got the nod. Another name familiar to Aussie readers is Arnel Porras, a capable performer who had some good results “Down Under”, who beat over ten in 2004 and is the current Filipino lightweight champion.

All things point to a “Rocky” victory, but, especially if this fight goes the route, (it won’t!) it will be a war and could well be one of the best of the year. With Amonsot buoyed by stable mate Nonito Donaire’s upset KO of Armenian-Aussie Vic Darchynian two weeks ago, don’t blink!

Next post: Katsidis defeats Amonsot! The birth of a new Blood and Guts warrior!