Katsidis defeats Amonsot! The birth of a new Blood and Guts warrior! 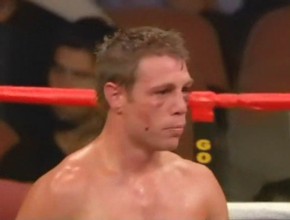 21.07.07 – By Iyzaslav “Slava” Koza: There is a new blood and guts warrior to take the place of retired boxer Arturo Gatti and his name is Michael Katsidis. Cut and bloodied in every place on his face that one can imagine the Greek Aussie didn’t stop punching until his body gave out in the way of a vicious 10th round assault spurred on by the notion that the ringside doctor could stop the fight.

If I were Czar Amonsot, I might be angry with the doctor because Katsidis was basically on autopilot once he heard the bout could be stopped and he could end up with a loss.

The fight started furiously with Katsidis moving forward and throwing short looping right hands on the button and the Filipino Amonsot boxing and looking to dictate the pace. Unfortunately for the loser the Aussie, a showman with an apparent fetish for wearing Brad Pitt’s attire from Troy, Katsidis wasn’t even aware that the Amonsat was trying to stop him.

At the end of the 2nd of two rounds already packed with action, Katsidis came back to his corner with swelling all over the left side of his eye, including most of the eyelid. The cuts on the left side of his face were clearly trying to show up the ones on the right. Were it not for them, and make no mistake about it, skill level of his opponent, Katsidis would have probably been charged with manslaughter. In the second round, already sensing he was in danger of being TKOed on cuts Katsidis landed a huge counter to put his opponent down. Showing guts of his own Amonsat got on and survived the hard KD.

What resulted from then up to the tenth were ebbs and flows the like that would make Cotto, Judah, Pavlik, and Miranda jealous, and could very well have cemented the bout as candidate for fight of the year. At the end of the period it seemed impossible that Katsidis was still fighting with those cuts, and even more so that they had gotten worse and did not hinders his intensity from diminishing much at all. Unfortunately for Amonsot, as mentioned, the doctor at ringside in the Aussie’s corner sealed his fate by telling Katsidis he could end up with a loss. Coming out like a man possessed, Katsidis landed as flush and as hard as he had up to that point in the spectacular contest and put an absolutely reeling Amonsot down with the follow up barrage. Were it not for the will and courage of Katsidis Amonsot’s own heart in surviving that charge and lasting through that round would make him a legend in his own right.

Both men obviously spent and the result of the fight mostly not in doubt, seeing as Katsidis would win if he was allowed to last the 12, the championship rounds were disappointing relative to the rest. Katsidis, obviously spent from the huge 10th round, mostly moved and posed, while Amonsot still thinking about the devastating beating, he took in the tenth cautious to go for the KO. In the last minute of the last round, Katsidis sensing the doctors were probably cheering him on and would allow him to finish, risked a bit more then in the previous five minutes and put a pleasant cherry on an already “fight of the year candidate” pie.

The scores were unanimous and so should be the praise from every true fan of boxing. The only question should be “when’s the next Katsidis fight?”