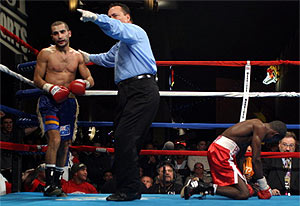 The undefeated champion is furthering his reputation as one of the best punchers, pound-for-pound, in the game today. The heavy-handed Australian’s victims have included Jair Jimenez, Diosdado Gabi, and Luis Maldonado, the latter two coming on Showtime. Vic Darchinyan is now 5-0 with 5 KOs in title fights and hasn’t gone the distance in more than three years.

The man they call “Raging Bull” will defend his IBF title for a sixth time. What the offensive-mined, crowd-pleasing slugger desires, however is to prove that he is the best of all the champions from 112 pounds to 130 pounds! ..

JH: Vic how are you doing? Tell us what’s going on with you?

VD: I plan on having a great fight on Showtime against Victor Burgos. The guy who beat Jorge Arce. And after him I want to fight Arce.

JH: People are saying that Arce is ducking you. True?

VD: I challenged him in Mexico and he said that he would fight me. And nothing.

JH: So you want to chase champions.

VD: Yes. This will probably be my last fight at flyweight and than I will move up. I want to test myself against the bigger guys. In this weight class I feel like I am fighting against kids. I want to fight against men! Bigger guys.

JH: Wow! Marquez is moving up to 122lbs this weekend to take on Israel Vazquez. You want to fight jump over two weight classes and fight him at 122.

VD: I can do it. You remember Manny Pacquiao was fighting at 112 and he moved up.

JH: True. Manny did make the move up in weight and he seems to have gotten stronger as he moved up to the bigger weight classes.

VD: I want to fight Manny Pacquiao. Not now but if he is still around maybe in 1 or 2 years. I am not saying I am the best but I want to fight the champions. This guy Victor

Burgos. He told me in the press conference that he was going to stand and fight against me. I am glad to hear that.

JH: Alright. Well I am certain that the people are excited to hear this. So the fan can expect to see a great fight this Saturday.

VD: I told him that I will destroy you.