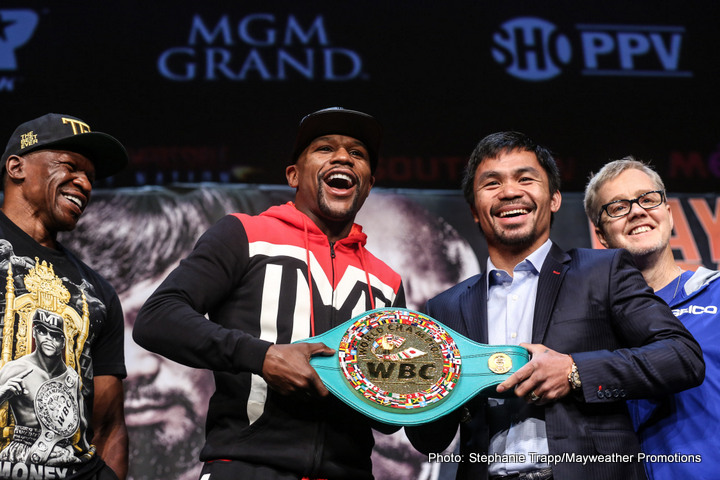 (In this piece, East Side Boxing/Boxing247’s resident scribe, Vivek “Vito” Wallace takes a glimpse at the media coverage of this historical bout, and why it could do without the very noticeable biases. Tomorrow, fans will get a glimpse of the legacies built by these two great warriors, and on Saturday, we take a look at “Keys to Victory”, “Four to Explore”, and a “Final Prediction”).

The world of Boxing has long been viewed as a sport on life support. Tyson, Holyfield, Oscar, and a few others maintained a status most thought would last forever. One by one those shining stars faded into the night, shifting the focus of most casual fans to the the NFL, NBA, and even MMA.

In a great parallel to life itself, any time a sun sets, another rising ‘son’ will soon follow. This particular era would produce two. One in America, and one in the poverty stricken streets of the Philippines.

The paths taken to stardom for both Mayweather and Pacquiao were vastly different, yet arguably the same. Drugs, violence, and sheer chaos surrounded the lives of both men, but a spirit driven by something bigger would lead them both to a better place. Fast forward a few decades and the legacies being built by these two men would ultimately divide the sport far more than any point we’ve seen in history. In Mayweather you have a flashy, flamboyant personality who never met a strip club or a designer fabric he didn’t like. In Pacquiao, you have a humble, Bible toting good samaritan, guilty of stealing nothing in his life but the heart of the fans.

Those brief descriptions go along strongly with the daily news narrative, but do they truly reflect the reality? At every turn, each description given of the two men at the center of this spectacle point to “good” vs “evil”, “positive” vs negative”. Fighting sports normally require someone to play the villain, but you’d have to take an awfully long trip down memory lane to remember the last one portrayed in such a horrific way outside of his sport. The history of Floyd Mayweather notably includes multiple counts of domestic violence and physical altercations against women. The media’s depiction of that checkered past has been as calculated as a game of chess.

Supporters of Mayweather continue to question why? From ESPN’s “Outside The Lines”, to the local news broadcast, seems the only narrative at play deals with Mayweather’s legal resume. Lost in all the legal jargon is a pristine reality that can’t go without mention! Most of us would pay top dollars to see a prime Ali versus a prime Tyson, or a prime Jordan versus a prime Kobe. History has had a way of separating the all-time greats of the past, allowing them to arrive close enough to be linked, yet too distant from one another to compete head to head. Well….for once, history got it right!

In Mayweather and Pacquiao, we have arguably the best two fighters of this generation, and they happen to dwell in the same weight class. Why are we choosing instead to use this moment to highlight negative? ESPN’s Sarah Spain, Rachel Nichols, and Keith Olbermann all seem to feel the world would be a better place if fans kept their money in their pockets in an effort to force Mayweather out of the sport. They have a right to educate fans on his troubled past, but at what cost and for how long? Mayweather has been in the sport for nearly two decades, and has broken records almost every time out. Better judgement would question why this ‘education’ on his checkered past never came before?

Domestic violence is not something to condone, but as Steven A. Smith so eloquently asked in a “First Take” broadcast back in February, “where was this outcry with Kurt Busch”? Why haven’t see seen the circulation of news stories and the boycott signs go live in permanent rotations? Sarah Spin, Rachel Nichols, nor Keith Olbermann seemed to be as disturbed, yet a comparable situation unfolded. What’s more troubling is the fact when you look at the Ray Rice’s and Kurt Busch’s of the world, Mayweather is the only one of the group that actually did jail time to serve as punishment.

The court system was involved, levied a sentence, and the sentence was served, yet there continues to be a push for some additional punishment, not considering the fact that according to the law, justice has been served. Marv Albert is a regular on the NBA’s broadcast television during regular broadcast, yet we overlook his past legal past because we acknowledge his talent in the present. How about Hope Solo? It’s these type of double standards that make it very difficult to support such agenda’s; yet very easy to identify those who want to use a grand stage do a little ‘grand-staging’ of their own.

Oddsmakers have placed this battle between these two warriors at nearly a 50/50 split. In apt fashion, it should be noted that this fight is only this massive as a result of them being equally as talented, and the coverage should parallel that balance. It was great to hear about the adversity that Pacquiao encountered to get to this point. Instead of unearthing old domestic abuse stories, wouldn’t it be great to learn how Mayweather battled through similar odds, yet chose to let his discipline navigate him rather than the streets of Grand Rapids, as well?

One of the greatest ironies can be found in the judgement pattern of the same society that breeds these stories. Tattoo’s and earrings have long been considered too much of a flirt with the ‘wild side’ in corporate boardrooms all around America. It’s intriguing to note that the convict viewed as the ‘thug’ in this domestic violence witch hunt is the one between the two men involved who does not bear any such markings or piercings? Just another example of how sketchy these stereotypes can be.

Going forward, it would serve the boxing community straight if all the reports to promote this fight were neutral, fair, and balanced. Mayweather has too many cars to count. Pacquiao also owns a fleet of 22 luxury cars and a yacht. Mayweather overcame violence and a turbulent childhood. So did Pacquiao. For every immoral story that can be dug up on one guy, so can be done on the other. In the end, it benefits fans and media alike to simply put the extras on the back burner and relish in this moment. We’ve never seen anything like this before, and in this lifetime, we never will again!