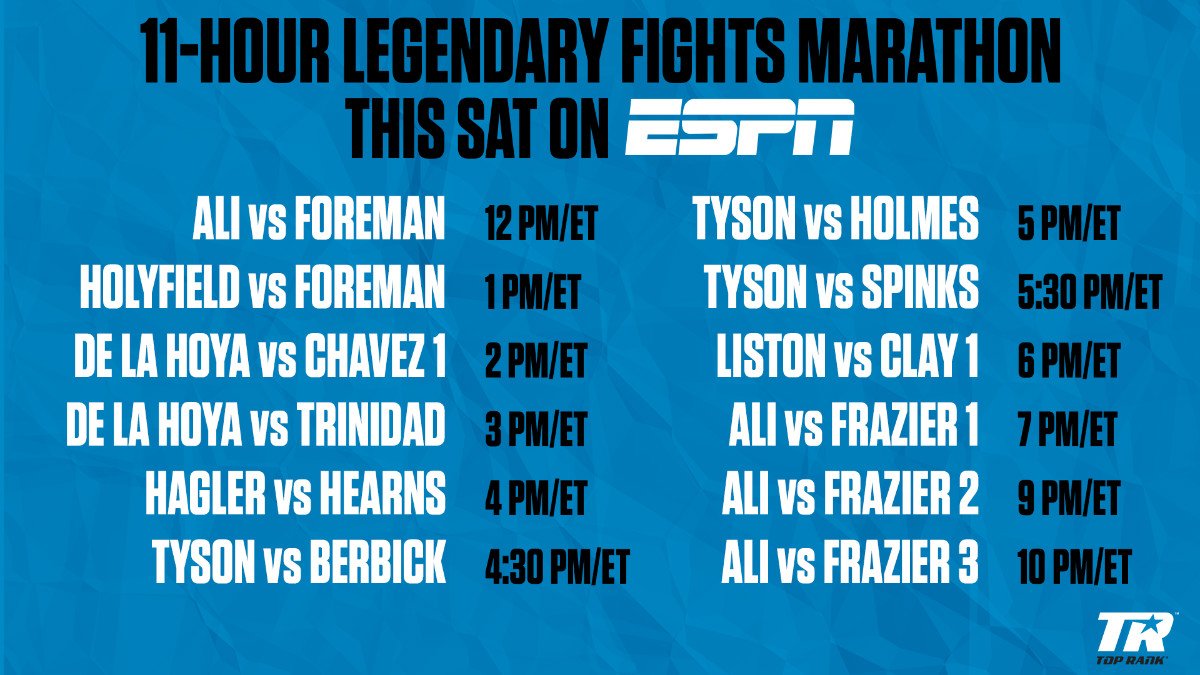 (April 16, 2020) — This Saturday, April 18, will be a day of classic boxing on ESPN when the network airs 11 consecutive hours of the sweet science starting at 12 noon ET. This special presentation will showcase some of the greatest bouts of all time, including the epic trilogy between Muhammad Ali and Joe Frazier. Ali-Frazier I has never been aired before on ESPN platforms and has not aired on U.S. television in nearly 30 years (August 1991).

In addition to the linear telecast, Ali-Frazier I will become available on ESPN+ beginning Saturday, joining the other two fights in the Ali-Frazier trilogy. Exclusively available to ESPN+ subscribers, it marks the first time ever that all three of the historic fights are available together on demand.

ESPN’s 11-hour Saturday programming initiative will begin at noon ET with Ali-Foreman and culminate with the Ali-Frazier trilogy, running from 7 p.m. to 11p.m. ET.

The full lineup is as follows:

Ali-George Foreman (12:00 PM ET): Ali was a 4-to-1 underdog against Foreman, who entered the fight at 40-0 with 37 KOs and two title defenses under his belt. Dubbed “The Rumble in the Jungle,” the fight became iconic after Ali employed the “rope-a-dope” tactic to tire out and ultimately stop Foreman in eight rounds.

Evander Holyfield-Foreman (1:00 PM ET): Holyfield knocked out Douglas to win the heavyweight title and chose Foreman, 42 years old and four years into his comeback, for his first world title defense. Holyfield won a unanimous decision, but Foreman pushed the younger man for 12 rounds. “The Battle of the Ages” was a heavyweight title showdown for the ages.

Oscar De la Hoya-Julio Cesar Chavez I (2:00 PM ET): De La Hoya, the then-unbeaten Mexican-American superstar, was seeking a world title in a third weight class against the beloved Chavez, who entered the bout with a 97-1-1 record. Chavez lost his super lightweight world title in four lopsided rounds, as a severe cut and a busted nose caused by De La Hoya punches forced the ringside doctor to stop the fight.

De La Hoya-Felix Trinidad (3:00 PM ET): Trinidad and De La Hoya were a combined 66-0 entering the welterweight title unification bout, which at the time was the most lucrative non-heavyweight contest in boxing history. Trinidad came on strong in the later rounds to eke out a controversial majority decision, a verdict that still sparks heated debate among fans.

Marvin Hagler-Thomas Hearns (4:00 PM ET): Quite simply, one of the greatest fights in boxing history. Round 1 is perhaps the greatest round in boxing history, and in less than three rounds of brutality, Hagler and Hearns cemented their status as legends of the sport. Hagler made 12 defenses of the middleweight world title, while Hearns won world titles in five weight divisions over a nearly 30-year career.

Mike Tyson-Trevor Berbick (4:30 PM ET): The beginning of a legend. Tyson knocked out Berbick in two rounds to become the youngest man (20 years old) to win a heavyweight world title.

Tyson-Larry Holmes (5:00 PM ET): In a matchup of youth versus experience, Tyson needed only four rounds to knock out Holmes, who entered the fight having not fought in nearly two years. Holmes held the world heavyweight title from 1978-1985, made 20 successful title defenses and is considered to be among the greatest heavyweights who ever lived.

Tyson-Michael Spinks (5:30 PM ET): Tyson earned lineal heavyweight champion status with his 91-second destruction over Spinks, who first defeated Larry Holmes in 1985 to win the recognized heavyweight title. Spinks edged Holmes in their 1986 rematch and defended the lineal title twice more over the next two-plus years before running into Tyson.

Sonny Liston-Cassius Clay 1 (6:00 PM ET): On Feb. 25, 1964, the unthinkable happened when Muhammad Ali, then Cassius Clay, entered the ring as a clear underdog to face heavyweight world champion Sonny Liston. Clay claimed the victory after Liston, one of the most intimidating fighters ever, quit on his stool, after the 6th round.

Ali-Frazier Trilogy (7:00 – 11:00 PM ET): In their first battle, since then known as “Fight of the Century” on March 8, 1971, Ali and Frazier were both undefeated gold medalists with legitimate claims to the heavyweight title in a nation torn apart from Vietnam when they stepped into the ring at Madison Square Garden. A vintage Frazier leaping left hook planted Ali on the canvas in the 15th round, as he closed the show in style to win a unanimous decision. Ali and Frazier met again three years later in 1974, with Ali avenging his loss in a hotly contested rematch that cemented the fierce rivalry.

“Thrilla in Manila,” their third and final fight, turned out to be the most brutal fight of Ali’s and Frazier’s careers. Ali and Frazier split their first two matchups, and the two went to war. After 14 rounds, Frazier’s trainer, Eddie Futch, stopped the fight. Neither man was ever the same, and the greatest rivalry in boxing history had reached its conclusion.

ESPN+ also features a library of hundreds of the most important fights in boxing history, as well as recent Top Rank on ESPN fight cards for replay, all streaming on demand. The historic fights on ESPN+ include legendary heavyweight showdowns like Ali vs. Frazier III, Ali vs. George Foreman, Joe Louis vs. Billy Conn, Tyson vs. Holmes, Jack Dempsey vs. Gene Tunney, Max Baer vs. James J. Braddock, Ali vs. Sonny Liston I & II, Wilder vs. Fury II and many more.