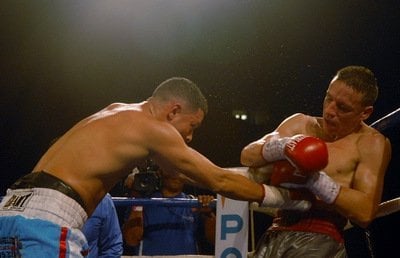 In a thrilling encounter, as part of the main event of the evenning, two-time world title contender, Mario “El príncipe ponceño” Santiago (22-3-1, 14KOs) won a unanimous decision over Hector Marengo (5-3-4, 3 KO’s) in a fight that was scheduled for eight rounds.

Santiago started good, landing solid left power shots to Marengo’s body, alongside with a stiff jab but in the third round, Marengo was very aggressive, landing good shots to Santiago’s face but Santiago managed to take control of the fight. All three judges scored 77-75 for Santiago

“All I wanted was a win, and it was good because I went the distance. I really felt good and now I’m more motivated than ever stated Santiago “the plan is to go down to 130 pounds, where I know, I will be in excellent shape, much faster and stronger, but still, I’m happy with tonight’s’ performance” said Santiago, who carried a large fan base to the event that was held in his hometown of Ponce, PR.

The Santiago vs Marengo fight was at 135 pounds.

Santiago was inactive from boxing for over two years for contractual conflicts with his manager.

Torres visited the canvas in the first round, but was able recover and drop Santana in rounds 3, 4 and 5 in order to obtain the victory in a bout scheduled for 6 rounds.

“I’m surprised ‘Sammito’, came well prepared, but my preparation was instrumental in this victory and we knew we were ahead” said an excited Torres.

In the super bantamweight, Edgardo “Eggie” Laboy (4-0, 2 KOs) remained unbeaten by crushing Angel Lopez (2-12) by TKO in the second round.López visited the canvas in the first and second round. Promotionally Laboy is sign with Universal Promotions and Gary Shaw Productions.

In the heavyweights, Jimmy Suarez (2-4) defeated by KO at 2:37 of the second round, Anthony Adorno (0-6), who visited the canvas twice in the very first round.