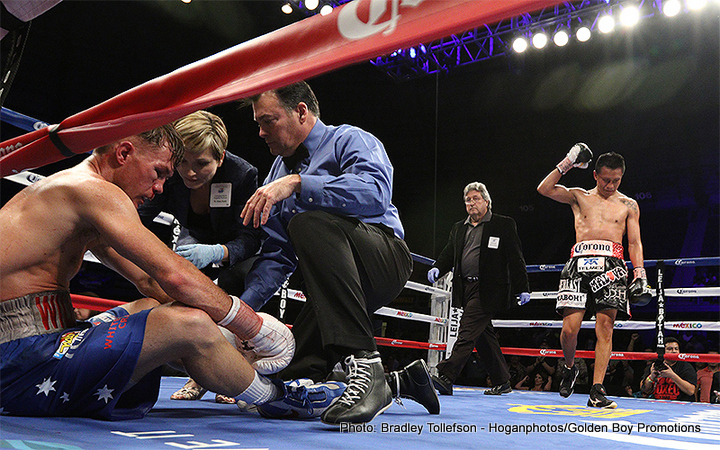 In the main event, Vargas and Tomlinson faced off in a bloody match as both fighters suffered lacerations to the face and took hard punches to the body. The fight continued on with excitement in every round, each fighter refusing to give up to the other. In an eighth round technical knockout Vargas retained the NABF and WBO International Junior Lightweight Champion.

“I feel very happy, it was a great result,” said Francisco Vargas. “I am ready to take the next step and fight in a world title match. I think this performance proves that I am a great fighter and that I am ready. Will Tomlinson is a tough, fast fighter. He threw some hard punches and took a lot. He is a warrior.”

“I feel disappointed; I didn’t get my timing or rhythm right,” said Will Tomlinson. “I had a great training camp I was trying to establish my jab and come up from behind, but it didn’t come together. Vargas is a good, hungry fighter and did everything right tonight.”

Opening up the telecast and the co-main event for the WBC USNBC light heavyweight title, undefeated knockout artist Vyacheslav “Lion Heart Chingonskyy” Shabranskyy (13-0, 11 KOs)fought Brazil’s undefeated Fabiano “Pit Bull” Pena (11-1-1, 8 KOs) in a scheduled 10-round brawl. What first started as a battle of equals quickly turned in Shabranskyy’s favor as each punch gradually wore down Pena. In the fifth round Shabranskyy was considered the winner by technical knockout as Pena bowed out of continuing the fight.

“It feel amazing to finally have a title belt, this is only the beginning for me,” said Vyacheslav Shabranskyy. “Pena is a good fighter, I respect him, but from the beginning I listened to my trainer and hit him in the body to wear him down.”

“This is a tough loss for me,” said Fabiano Pena. “I usually fight at lesser weight and that is where I feel more comfortable. This isn’t the end for me.”

San Antonio’s undefeated prospect, Armando Cardenas (7-0, 4 KOs) fought in a six-round welterweight bout against Marco Antonio Solis (3-1, 1 KOs) of Houston. Cardenas dominated the fight early on by knocking down Solis in the first round and won by unanimous decision with a score of 59-54, 58-55, 58-55.

Vargas vs. Tomlinson was a 10-round NABF and WBO International Junior Lightweight bout is promoted by Golden Boy Promotions and Lejia*Battah Promotions. The HBO Latino Boxing two-fight telecast was sponsored by Corona Extra, Mexico – Live It To Believe It!