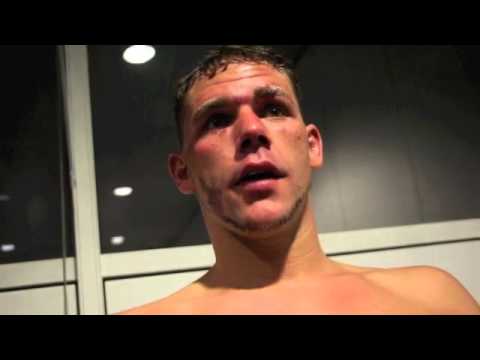 Eubank missed wildly at times – overreaching with shots, as his dad often used to, the right hand especially – and he wound up off balance and vulnerable to Saunders’ speedy and accurate counters as a result. However, on the plus side, Eubank showed he can fight, somewhat dirty, on the inside. When he did work hard and when he managed to get the slicker, classier Saunders to fight up close, Eubank had success and won rounds. But Saunders, who took some hard shots to the chin, is as tough as Eubank and he simply refused to let his verbal tormentor get the better of him tonight.

For the first five rounds, it looked as though Eubank was going to be embarrassed and go home having been shut-out on the cards. Saunders was making it looks easy as he jabbed his challenger’s head off and made him miss by inches as Eubank tried to land his own shots. But Eubank came into things in the middle rounds and on occasion it looked, fleetingly, as though Saunders just might be overwhelmed or caught by a desperation bomb. The second half of the fight produced plenty of drama, that’s for sure.

Both men were fatigued and marked up but neither warrior had any intentions of giving up. It was close, maybe a little too close on the cards, but the right man won.

Saunders said he will now aim for the world, Eubank can come again.

Tonight’s fight posed as many questions as it answered: what would have happened of Eubank had worked hard from bell-one instead of waiting? Would Eubank Junior benefit from a corner that does not included his father and his seemingly enormous ego (Ronnie Davis, Eubank Jr’s trainer/corner-man, did not say a word until the middle rounds)? Is Eubank capable of going back to the drawing board and learning/ improving his game?

As for Saunders, the only remaining question is, can he become world champion?