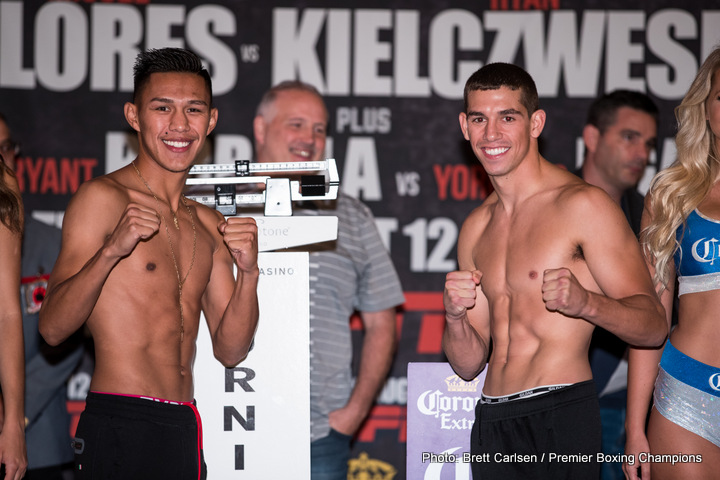 So, this might be worth checking out, even by those fans who might be burnt out from watching Olympic boxing on a daily basis. But, even if the match-up didn’t intrigue me, I suspect that I’d probably watch the card anyway, for reasons that have little to do with the match-up itself.

You see, this card mark’s the end of PBC’s run in ESPN- and potentially the end of the sport of boxing’s run on that network. According to the Bad Left Hook website, ESPN hasn’t expressed a desire to renew their agreement with that organization, or to provide any boxing related programming to replace it. That could change, of course- but in the event that it doesn’t, this means that this fight could mark the final time that we get the chance to watch boxing on that network.

Part of me can’t help but feel a little sad about this. After all, boxing was a fixture on the network for the majority of my life, and for the entirety of many other fans’ lives as well. From the time that it aired its first fight back in April of 1980, it provided us with the chance to view some truly special fighters in action. Mike Tyson made a few brief, destructive appearances on the network in the embryonic stage of his pro career. George Foreman appeared on ESPN on several occasions during the beginning of his unlikely comeback. Floyd Mayweather Jr. made his pro debut on the network, as did Guillermo Rigondeaux and Miguel Cotto.

The network also featured fighters who weren’t necessarily great, but still beloved due to their willingness to wage war with anyone they met in the ring. Frank “The Animal” Fletcher (who fought on the very first card) was one such fighter. Tommy Cordova was another. Micky Ward likely wouldn’t have had the opportunity to engage in that now legendary trilogy with Arturo Gatti had he not engaged in equally entertaining battles on ESPN against the likes of Reggie Green and Emmanuel Augustus. Speaking of the “Drunken Master”, Augustus established himself as a something of a cult favorite among fans as a result of his many appearances on ESPN’s Friday Night Fights.

The aforementioned slug-fest between Ward and Augustus was Ring Magazine’s Fight of the Year back in 2001, and one of the best fights I’ve ever had the pleasure of watching. That same year, Julio Gonzalez and Julian Letterlough fought on ESPN and produced a five knockdown epic that was nearly as good. Ten years later, Delvin Rodriguez and Pawel Wolak produced an epic of their own. Not every fight on the network were as good as these three, of course. The various boxing programs on the network produced duds on more than one occasion. But, every now and then, a fight on ESPN would develop into something special, or produce a crazy round like the fabled fifth stanza in the 1981 fight between William “Caveman” Lee and John LoCiciero, or a spectacular knockout like Edison Miranda’s one punch decimation of David Banks.

Put in more succinct terms, ESPN has provided us with the means to watch the best-and worst-that the sport has had to offer for the past thirty six years. Even if the network ultimately decides to provide boxing fans with additional programming going forward, that’s something that I feel deserves recognition.

And my form of recognition, is to watch the final boxing that the network appears likely to televise, at least in the near future. It’s a good match-up anyway, between two fighters who might not necessarily be world class but who might be in a position to approach that level with an impressive showing. Really, it’s the type of match-up fans like us would have wanted to see when tuning in to watch boxing on ESPN…

…And, who knows? Perhaps this fight will develop into something just as special as some of the other wars that have aired on the network.

Perhaps the final chapter of boxing’s tenure on ESPN will end with a bang- and that strikes me as being as good a way to end things as any.

Author’s Pick: Flores UD10 Kielcwesky. Flores has a greater edge in technique than Kielcwesky appears to have in terms of speed.