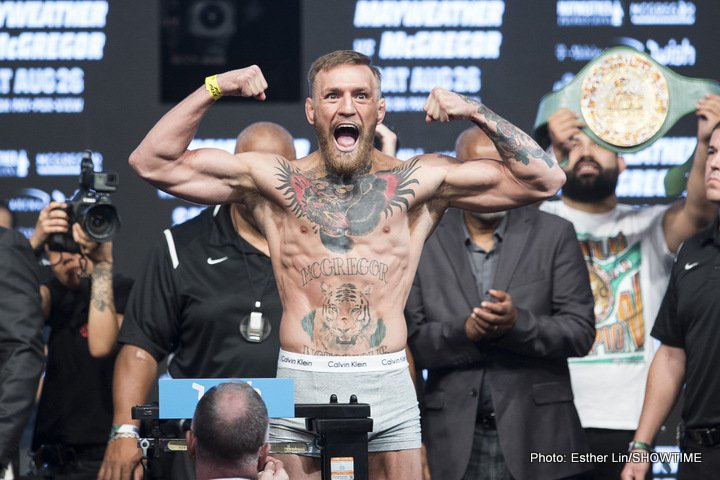 As soon as it hit the news-wires that whopping great 42/1 underdog James “Buster” Douglas had beaten the “invincible” Mike Tyson, by stunning KO, the entire world went into shock. But even this monumental boxing upset would be topped if MMA star/boxing debutante Conor McGregor managed a win over the 49-0 Floyd Mayweather tonight in Las Vegas.

So says Buster himself, the man who sent the world of boxing, indeed sports, into a state of disbelief that February morning in Tokyo, Japan. Douglas, speaking with TMZ Sports, said a McGregor win over Floyd would be an even bigger upset than the one he scored over 25 years ago.

“I would think so,” Douglas, 57, said in answer to whether a McGregor win would top his famous win. “I think his odds are a lot longer than mine [were in being able to manage a win]. Conor is a fighter, he’s not a boxer. I think he’s going to be at a real disadvantage. I expect Mayweather to be at his best. He [McGregor] has no boxing skills. He’s strong, a well-conditioned athlete, but he’s not a boxer.”

As is the case in the opinion of a good many other people, McGregor’s only shot, according to Douglas, is to get lucky and catch Mayweather with something big – “A Hail Mary punch,” as the former world heavyweight king put it. Surely, though, the odds of this actually happening are about 100/1, if not greater.

‘Everyone has a puncher’s chance,’ is the phrase we have heard again and again in the lead-up to tonight’s fight. And that’s about all McGregor does have. Unlike Douglas, who had great experience in the ring to fall back on in his own Fight of The Century (or Upset of The Century), McGregor has not got one single round of live boxing under his belt.

The moment will soon be here, the hype for the biggest mismatch in recent boxing history over at last. To many good judges the only question is, will Mayweather win by stoppage or KO or will he allow the bout to go to the score cards?

We won’t see a Douglas-Tyson type stunner tonight; we will instead see Mayweather romp to 50-0. And maybe that will be the most upsetting thing for many a hardcore boxing fan.