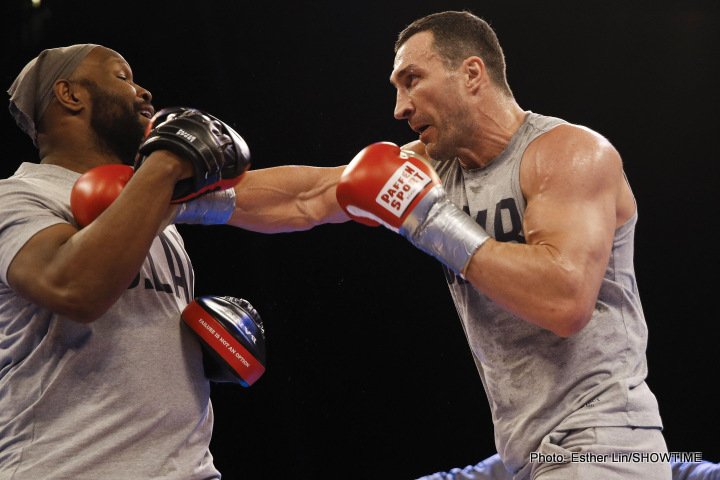 “He might have the strongest chin in the world,” Wladimir Klitschko speaking after his 2002 fight with Ray Mercer

Nobody had a chin like Ray Mercer. Certainly, no heavyweight of the 1990s had a chin quite like Mercer (barring perhaps David Tua – and what a fight it would have been had the two collided). But, by the time “Merciless” met an emerging Wladimir Klitschko it was the 2000s, and all chins erode some, no matter which fighter they belong to.

And so, on this day 18 years ago at The Taj Mahal in Atlantic City, New Jersey, Mercer fell for the first time in his long career. Klitschko, still a good number of years away from becoming the dominating, long-reigning world champion we all know him as today, gave Mercer a steady hammering. At age 26 to Mercer’s 41, Klitschko had too much of everything for the former WBO heavyweight champ – this belt now belonging to “Dr. Steel Hammer,” the Mercer fight his fourth defence of the strap. And it showed.

Klitschko decked Mercer in the opening round, with two big left hands to the head sending the rock-chinned warrior down. This was just the second time in his career that Mercer had been down (Evander Holyfield being the first man to send Mercer to the canvas, in their 1995 battle). Mercer got up, saw out the round, and then took his lumps. Swollen around the eyes, Mercer took over 190 punches from Klitschko, this over less than six rounds.

The end came in the sixth, as Klitschko opened up on a cut and tiring Mercer. Klitschko landed a brutal barrage – 31 of his 46 thrown shots landing according to Compubox – and Mercer failed to throw anything back. Still, Mercer did not go down. This prompted a victorious Klitschko to say, “He has the strongest chin of anyone I have ever faced.” And, “He might have the strongest chin in the world.”

For sure, Mercer was tough. Once upon a time, Mercer’s incredible chin could withstand just about anything without issue. But Father Time can do a whole lot to a fighter, and to a fighter’s chin. Even one as amazingly tough as Ray Mercer’s. Wladimir Klitschko would go on to stop the huge Jameel McCline, before being sensationally upset by Corrie Sanders.

It would be three years before Wladimir fully regrouped and, having beaten Chris Byrd to take the IBF heavyweight title, began his reign of dominance.