As Oleksandr Usyk said yesterday, fighting for his country is a far more important thing to him than a championship belt. With Usyk currently defending Ukraine from the ongoing Russian invasion, there is little time for him to even think about boxing. The return fight with Anthony Joshua, who Usyk dethroned a little over five months ago, will almost certainly have to wait.

There had not yet been an official date, or venue, announced for the rematch but with the awful hostilities in Ukraine likely to go on for some time (we of course hope not, that a diplomatic solution can and will be found), it could be very late this year, or even next year, when Usyk fights again. With this being the likely case, Joshua is looking at the possibility of taking an interim fight – as Eddie Hearn explained when speaking on the MMA Hour. 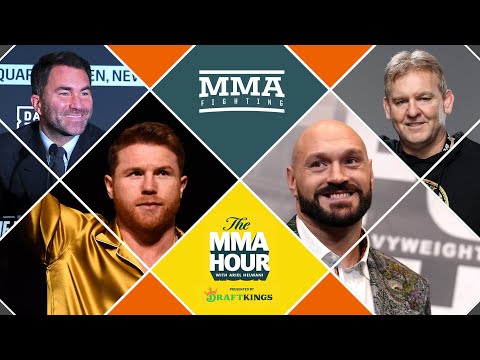 “It’s difficult to speak of behalf of Oleksandr Usyk,” Hearn said. “Firstly, I thought with everybody in Ukraine and people showing incredible bravery out there, particularly some of the great fighters of the past and Usyk as well. He can have the time that he needs, we [AJ] don’t want any other fight but Oleksandr Usyk. Whether there’s a delay for that fight and we have an interim bout, I guess that’s subject to the situation with Usyk and how much time he needs. It’s a very emotional time for the people of Ukraine. So we’ll respect them and give them all the time, but we wouldn’t be looking to get out of our obligation, is what I’m saying.”

Some people have suggested that it would be a smart move on the part of AJ if he did take an interim fight, whereby he could get to bond with his new trainer and gain some much needed confidence ahead of the return with Usyk. It seems this is what may happen. Again, there are more important things than boxing going on and it does seem unlikely Usyk will be fighting in the month of either May, June, July, or even later.

How on earth could even as great a fighter as Usyk be expected to focus and train with 100 percent dedication while everything that is happening to his homeland is swirling around him?

As for who Joshua could fight in an interim bout, there would no doubt be no shortage of names calling for the fight should the opportunity present itself. How high up the rankings would AJ go, though? Joe Joyce – too risky? Daniel Dubois – too risky? Luis Ortiz or someone else? We can only guess at this stage.