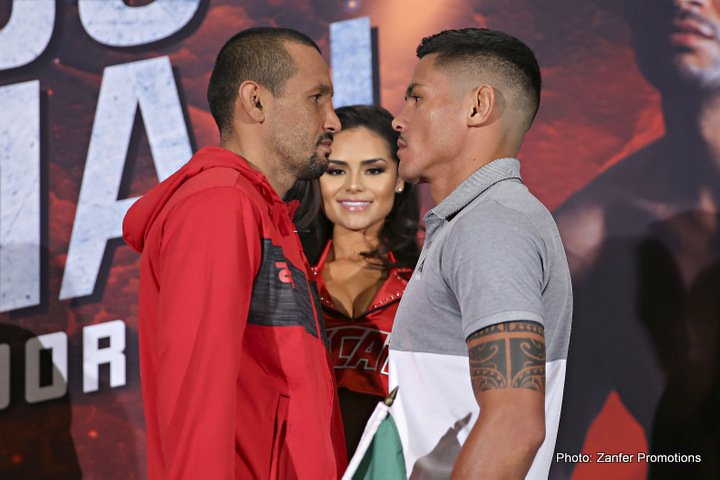 Going up against Saturday’s historic Vasyl Lomachenko-Guillermo Rigondeaux fight in New York, will be the all-Mexican battle between Orlando Salido and Miguel Roman. The ten-rounder may not be able to advertise the boxing pedigree or the sheer silky skills that will be witnessed in the Lomachenko-Rigondeaux fight (or chess match) but in terms of action, this fight will almost certainly outdo the WBO super-featherweight title fight.

There will be no title on the line in Las Vegas, but the Salido-Roman bout promises to be both significant as well as exciting. Salido, 44-13-4(31) and the only man to have beaten Lomachenko at pro level, is edging towards the end of his thrilling career and he is promising to deliver yet more action against Roman, 57-12(44).

Roman, the younger man by a significant margin, feels youth will be served, while “Siri,” a former two-weight king, is telling his fans he will give them another great value for money fight that he will walk away from victorious.

“Against Miguel Roman, I will give them another fight to remember,” Salido told ESPN.com. “Because of our styles, this fight has the makings of a war and there will be fireworks from beginning to finish.”

Fans were hoping for a fight that might have been an epic, as Salido was to have fought WBC 130 pound champ Miguel Berchelt, but Berchelt had to pull out and in stepped Roman. As things stand now, Salido is the A-side for once and he is enjoying the status his hard work has earned him.

It’s unclear what Salido will do if he beats Roman on Saturday, but for as long as he’s active and for as long as Lomachenko has been beaten by Salido and Salido alone, there will be talk of that rematch. But how many times can Salido – a true warrior who has given us classics against the likes of Juan Manuel Lopez (twice), Roman Martinez (also twice) and more recently Francisco Vargas – go to the well?

Fans will get boxing sweetness from the Rigondeaux-Lomachenko fight on Saturday, and fans who choose to tune in to the “other fight” will get action – and very possibly a whole lot of blood and guts, too.

Which fight will you be tuning in to watch live on Saturday night?