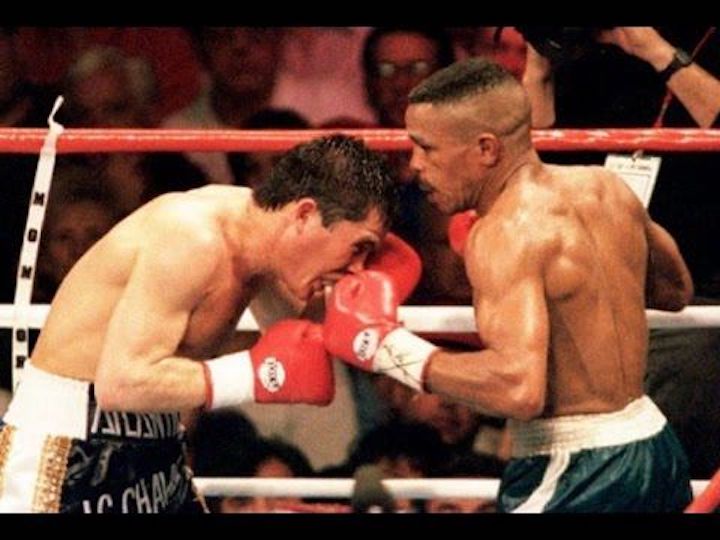 Another stark reminder of how brave all fighters have to be, how much risk they take by fighting for a living, is the recent revelation that Frankie Randall is now battling both pugilistic dementia and Parkinson’s. Each time a boxer steps into the ring, he or she faces danger, and years later, when the career is over, there is the fear that a condition such as those the former 140 pound king who upset the great Julio Cesar Chavez is battling, can appear.

Never should it be forgotten how much a fighter lays on the line by doing what they do in the ring.

As per a story at Ringtv.com, Randall’s son has confirmed how his father is now fighting a much bigger fight than any of those battles he engaged in in the ring. Randall was a fearless warrior throughout his (too long) career, and fans will never forget his epic win over an 89-0-1 Chavez in January of 1994. Today, the 58 year old is in a nursing home, his condition worsening all the time.

“My dad has pugilistic dementia and Parkinson’s,” Marcus Randall told Ring. “A frontal lobe brain injury that affects his speech, motor skills, and mental stability. Due to his condition, my family and I made the decision to place my dad in a nursing home in Tennessee. We wish to keep the location private at this time. I’m sure his condition progressed over time. He was a boxer; he gave his whole life to boxing, he loved his job.”

Randall, who fought professionally from 1983 to 2005 and compiled a 58-18-1(42) record, really did fight on for far too long. Who knows if he would be in better health today had he quit the rigors of the ring sooner than he did. A champion at 140 pounds three times, Randall, known as “The Surgeon,” beat top names such as Juan Martin Coggi, Rodney Moore, Jose Barboza and Edwin Rosario.

It is, though, that big upset decision victory over Mexico’s greatest-ever fighter that ranks as Randall’s finest hour.

Aaron Snowell was in Randall’s corner that night at the newly opened MGM Grand in Las Vegas, and the trainer most well known for working with Mike Tyson kindly spoke with this writer about that astonishing fight from over 26 years ago:

“I still talk with Frankie. He’s now fighting the exact same thing Muhammad Ali had to fight – Parkinson’s. His son came out and spoke about it recently. I knew what was going on but I stayed quiet. The night Frankie beat the great Chavez, that was also a great night for me as trainer, in the corner. That was special. So many great memories.”

We all wish Frankie the best.