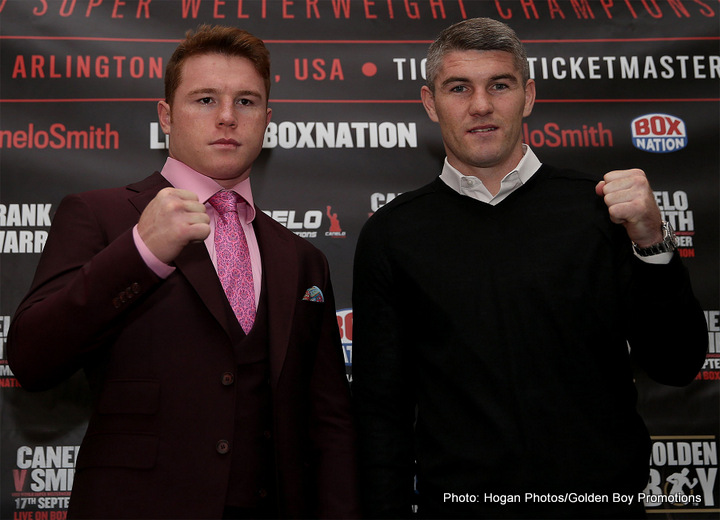 British boxing promoter Frank Warren has promoted some great fights over the years and he has also witnessed his share of big upsets, where a British fighter shocked the world. Now, ahead of his fighter Liam Smith’s September 17 fight with Mexican superstar Saul Canelo Alvarez – a fight that will actually see Smith enter the ring as the defending champion – Warren is letting us all know we need to get ready for another upset scored by a British warrior.

Warren got Ricky Hatton his massive 2005 fight with the great Kostya Tszyu and, despite overwhelming odds, Hatton pulled it off. Warren says, in speaking with Box Nation, he gives Smith more of a chance against Canelo than he gave Hatton against Tszyu.

“I know that Liam can fight,” Warren said. “I think he’s one of the best young fighters to come out of Liverpool. I can think of a few fighters who have been underdogs, like Joe Calzaghe, when he fought Jeff Lacy and Bernard Hopkins. Or Ricky Hatton and Kostya Tszyu – no-one gave Ricky Hatton a chance. I think this guy’s got more of a chance. He can fight. They call him the Scouse Mexican – he fights like a Mexican. We’re going to see a huge upset. Be prepared for a huge shock in September.”

If Warren is right – and if rival promoter Eddie Hearn is right in his belief that Kell brook can score what would be an even bigger upset over Gennady Golovkin the previous week to Smith-Canelo – British boxing will celebrate an amazing month of September; indeed an amazing year in 2016. But can Smith really pull it off? He is unbeaten, he has a great trainer in Joe Gallagher and he has huge self belief. Hatton ticked all these boxes when entering the Tszyu fight and this particular Manchester warrior scored one of the biggest wins in British boxing history.

Hatton of course had home advantage, his shot at Tszyu coming at The Manchester Arena. Also, and perhaps crucially, Hatton faced an ageing Tszyu, who was coming to the end of his great career. Canelo is probably right at his peak. Smith is up against it, that’s clear. In terms of the biggest British boxing upsets, the win Randolph Turpin scored over the immortal Sugar Ray Robinson in 1951 will probably never be topped. Lloyd Honeyghan – 30 years ago this September (maybe a good omen for Smith and Brook!) tore apart 8-1 odds and did likewise to the great Don Curry.

If Smith does it and beats Canelo, it might not rank quite as high as these two unforgettable nights for British boxing. But if Smith AND Brook can snatch wins in the same month, against two excellent pound-for-pound stars, the celebrations might prove bigger than anything British boxing has ever seen.