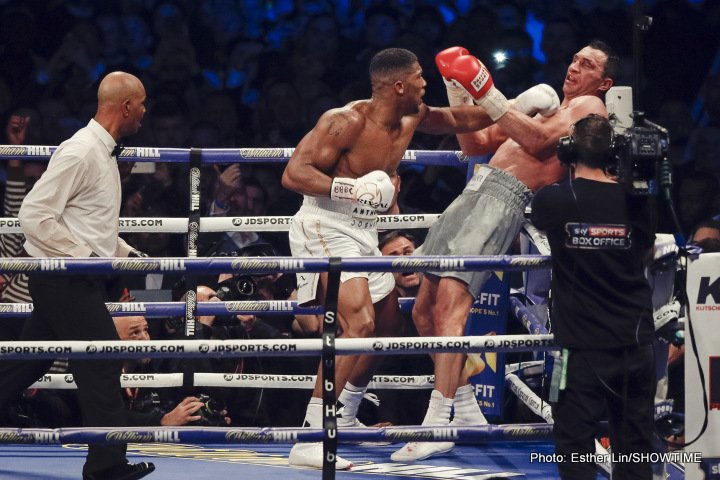 Though he hung up his gloves and retired in 2012, the fire still burned inside Vitali Klitschko; in fact it probably still does. The elder of the two Klitschko brothers (and in the opinion of many the best – certainly the toughest) was in Wladimir’s corner that thrilling April night in 2017 when Anthony Joshua overcame the toughest, most perilous moments of his entire career to come back and violently halt Wladimir in the eleventh-round. And, as he has revealed to Bookie Ratings, the former heavyweight champion had to force himself not to climb into the ring and, “tear off Anthony’s head” that evening.

Vitali – who later blamed himself for giving his brother instructions to pace himself and not go all-out for the finish after Wladimir had badly hurt Joshua in the earlier going of the action-packed fight – said he could barely stand seeing Joshua defeat his brother. Over the years when they were both active, Wladimir would try and avenge a Vitali loss, and vice versa. And Vitali had to struggle to overcome his brotherly instincts that night at a sold-out Wembley.

“I had a great desire to get into the ring after the bout between Wladimir and Anthony Joshua,” Vitali said. “There was a desire to tear off Anthony’s head. In fact, in the career of the Klitschko brothers there was such an interesting component – I once lost to Chris Byrd, but Wladimir, in the next fight, went against Chris and took revenge for his brother by knocking him out. Then Wladimir lost the fight to Cory Sanders and then the elder bother came out, knocked him out and took revenge for him.”

As great a fight as Wladimir Klitschko Vs. Joshua turned out to be, it is interesting to ponder what type of a fight we would have had had Vitali and AJ got it on. As Vitali says today, it almost happened. Would Vitali, with his rock chin and his superior killer instinct (superior to Wladimir’s) have been too much for the still-learning Joshua? It’s a fight confined to Dream Fight status now, as Vitali said in the interview.

“There is a desire, but opportunities no longer allow,” he said.

These days heavily devoted to politics, Vitali is too civilized to embark on a ring comeback. Maybe it’s just as well for Joshua that this fight did not happen!